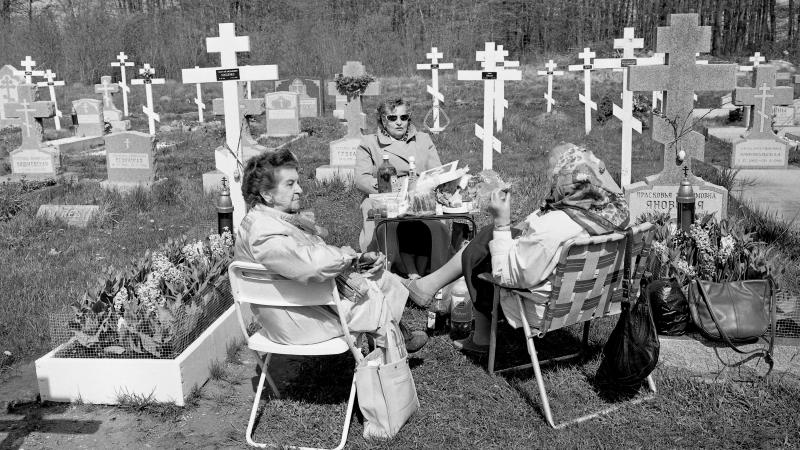 Between 1996 and 1998, Bastienne Schmidt and her husband Philippe Cheng traveled throughout the United States photographing the diverse services and ceremonies Americans use to mark the death of family members and friends. According to Cheng, one of the goals was to "show some of the poetry of death and dying in America." The selections below span from Las Vegas to Vicksburg, from New Orleans to New Jersey, and places in-between. As Anne Strainchamps notes in her interview with the pair, the images often capture a deep sense of place—a reminder that mourning and memory are not just in the mind, but rooted in communities and geographic space.

Even though they often knew no one at these events, the two were able to establish trust through their approach. They chose not to shoot wide-angle from far away, but to get in close and engage with the people themselves. According to Schmidt, “Photography is also a tool to bear witness,” and in their travels they found themselves able to tell stories and share images of people that might have otherwise gone unseen.

On the Beauty of Graveyards

A funny thing is that when my husband and I met, we photographed together in the deep snow in upstate new York in a cemetery. So for us it was always a place of beauty, spiritual beauty, where you honor the ancestors in the sense that there were people before us and there will be people after us.

On Photographing a Russian Orthodox Picnic in the Graveyard

They have a celebration to honor the loved dead ones on Russian Easter and they gather at the cemetery and they bring food, they have eggs, they bake cakes, they drink vodka. And it’s a very jolly get-together. It really reminded me of the celebration of the Dia de los muertos. So people just brought their picnic chairs and spent the whole day at the cemetery. And it was a coming and going, groups joining other groups, it had some very nice positive energy.

On How Cemeteries are Changing

Cemeteries can be a business. There are private corporations that own cemeteries, with distinct rules. When we photographed in Tucson AZ,we were shocked to see a lot of uprooted graves with markers that had just been thrown out to the wayside. People told us the cemetery had been taken over by another corporation and some people didn’t pay the fees and their graves were just uprooted. And they said they weren’t notified or anything, so that shows you there’s another side of death.

On the Disappearance of the Cemetery

What has happened in America is the suburbanization of death. It was easier when the cemetery was in the village or the small town or the big city, because you could walk there. But now you need a car; it’s like going to the mall. And if you have to drive 10 miles or so to go to the cemetery, people just tend to do it less.

We live in this time where we’re missing a sense of place. We’re feeling displaced and that’s true for the physical place but also in a spiritual sense. As religion is not so important anymore in our lives, we have to reinvent our own way of mourning and grieving, our own rituals. And rituals are very important in this process of grieving.