Finding Beauty — And Survival — Amidst Garbage 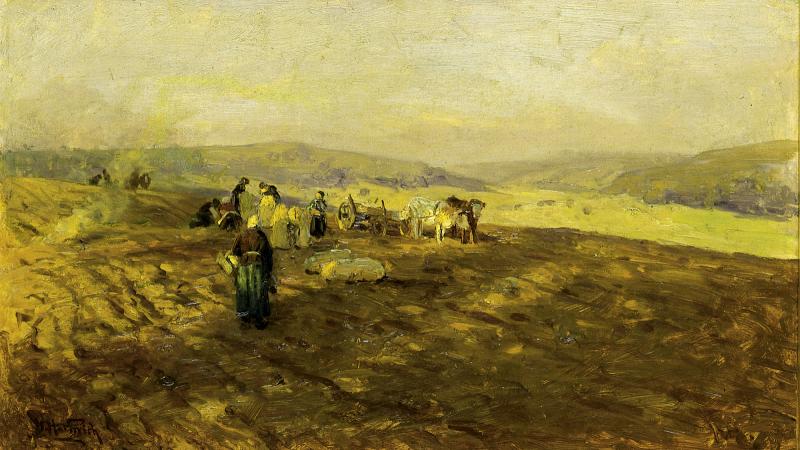 Influential French New Wave filmmaker Agnès Varda has passed away at 90. She died of breast cancer in her home in Paris on March 29, 2019.

A forerunner to filmmakers like Jean-Luc Godard and François Truffaut, Varda was praised for her work breaking visual rules with her films, as well as the naturalistic style she applied to her work, both fiction and nonfiction.

In 2017, Varda collaborated with French photographer "JR" on a documentary called "Faces Places," which earned an Oscar nomination for best documentary feature that year (it didn't win.) That same year, the Academy honored her with a lifetime achievement award for her work.

As summarized by Indiewire, the impact Varda had on the current generation of filmmakers, particularly women, is enormous. Everyone from Miranda July and Alexandra Hidalgo to Lena Dunham and Greta Gerwig have counted her as an inspiration.

Prior to "Faces Places," Varda made the documentary “The Gleaners and I,” a portrait of people who make their living picking over stuff other people have thrown away, everything from discarded vegetables missed in a farmer's harvest to piles of urban garbage. Sometimes they’re artists and sometimes they’re just trying to survive. In many circles, the film is regarded as her finest work.

Steve talked to Varda about the film in 2002.

Agnès​​​​​​​ Varda: Some people need the potatoes, need the food, need everything. I became very touched by the subject —starting with the little emotion of [a few] people, and then the big problems of overproduction, of waste, bad distribution all over the world between rich countries and poor countries.

France is not a poor country, but we have poor people. A lot of poor people who have to eat from what they can find. And I was impressed by the fact that when I started to film, I felt myself as a gleaner — picking images, picking stories, picking faces.

Steve Paulson: I suppose especially as a documentary filmmaker that really is kind of an act of gleaning.

AV: Yes! Although I didn't want to compare myself with poor people. Artists also pick things in the street to make sculptures or paintings out of it.

SP: Until I saw your film, I had never really associated gleaners with urban spaces. Gleaners were the people who live out in the countryside, those people who would be picking through the dumped potatoes or scouring the ground for fallen apples. And then to think about the scavengers in cities, who pick through dumpsters or garbage, the trash pickers - you're saying they're really doing the same kind of thing.

AV: They pick what other people have left abandoned. There is a law about property — if it's in abundance somewhere and you touch it, and you take it, you become the owner. The idea is that you come after people who were the owners if they're finished — it’s a very interesting law.

SP: You have some very poignant interviews with people who were in your film. For instance, there's a man who had been a truck driver and he lost his job. His wife left him, she took their three kids away, and he's left with nothing. And he's there living in a little trailer, and yet he has dignity in the way you've portrayed him in the film. He doesn't come across as a loser. He comes across as someone who is so sad that he's had some very bad luck in his life.

AV: He's a survivor. He has to fight for life. To fight for survival. And when he said that he goes in garbage, I love the way at the end that he says, "Well, your hands? You can wash them." Like, there is nothing wrong in picking in a garbage can, as long as you can wash your hands.

Other people in my film, they show so much intelligence and they really understand the situation. They speak clearly about what it's all about. What you call dignity is also ... not so much pride, but intelligence. What I really work for in my documentaries is to make clear that they have as much possibility of understanding the situation as you and me. The difference is that they have nothing. They don't eat, they have nothing to warm themselves. They live in terrible trailers with no heat. They tell us how difficult their life is, but they think, and they think clearly. And that was a point to make clear in my film.

SP: Then there's another man in your film who clearly sees this way of life as a political act. He says he lives on almost 100 percent of picked trash, and he's been doing it for 10 or 15 years. He's never gotten sick — he's careful about what he eats.

AV: And he loves the birds! He saved all these birds from catastrophes with oil spoiling the ocean, spoiling the fishes, killing the birds. And this is why there's this movement now about not only ecology, but trying to save the planet, to make it big.

SP: It seems to me you're doing something very complicated with this film. On the one hand we've been talking about how some people have to pick through the trash to live. That's where they're going to get their food. But there are other people who see beauty in the trash, who see an object on the street that's out by the roadside, it's going to be thrown out — and they think it's gorgeous. These people turn it into art. You're really raising the question, what is beautiful? What is art?

AV: Well, just to not decide what is good and bad, to start with.

There was a scene in the film where I come home and my ceiling is totally rotten — there was a leak or something — and people say, "Oh, you have to fix it right away it." But it looks quite good to me. It looks like an abstract painting. It was beautiful to look at.

Then it became too wet — I had to fix it.

What I'm saying is that beauty is where you don't expect it to be. We shouldn't be just square about "this is art." "This is poor and stupid." "This is good and good." I'm trying to just leave myself totally ready, trying to understand what's around me and share it with other people, because it's always a question of sharing. I make a film so that people in the audience will meet the people I've been filming and discuss among themselves, "What do you think about gleaning?"

A film can be a mind opener. And I had my mind opened by the situation and the film.

SP: You have interviews with wonderful artists, people who've scavenged to find various objects that were being thrown out and have turned them into collages or other kinds of artwork. There's one man who builds sculptures out of dolls.

AV: It’s real wild. He used to be a mason. And when he retired, he went to the garbage and he's hooked on dolls. And he piled them up — totem-like, like big towers. There are many wild artists who wouldn't be recognized in museums or galleries, but they do their thing. And I like to approach those out-of-the-way people.

AV: Absolutely, because the insiders are sometimes so heavy, so classical — they don't see the world, you know? They just go their way. Which is okay.

But I'm interested in other people. Myself, I consider myself as a filmmaker slightly on the side.