Four Girls Growing Up In 'Another Brooklyn' 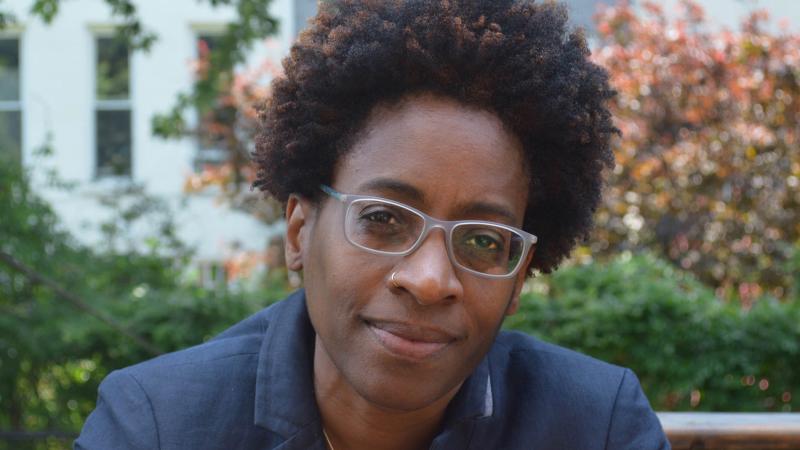 For author Jacqueline Woodson, the center of the world is the Bushwick neighborhood in Brooklyn where she grew up.

In her novel "Another Brooklyn," she tells the story of four young girls living in 1970s Brooklyn. It’s the story of their friendship and journey to womanhood. She told Steve Paulson of "To The Best Of Our Knowledge" that this kind of black girl narrative didn't exist when she was younger.

Steve Paulson: Jacqueline, what does the title of your book "Another Brooklyn" refer to?

Jacqueline Woodson: So "Another Brooklyn" refers to a number of things. First and foremost, it's the Brooklyn of another time. The Bushwick that is on the page here has changed drastically. And it also refers to the girls looking for a way out; exits from their current existence.

In the 1970s, there was white flight going on, white folks were moving out to Long Island in Queens, upstate to Westchester and black and Latino people were moving in through the Great Migration and through immigration. Then it settled into a black and Latino neighborhood that was considered by people on the outside — urban, ghetto, slum — whatever the words of that period were. And it was one of the things I wanted to explore in the book was gazing from the inside because so much of the narrative around the place at that time was an outsider's gaze. And it wasn't our truth.

SP: What was the neighborhood like when you lived there as a kid?

I live in a neighborhood called Park Slope, also in Brooklyn. Back in the day, people would walk into the street because they knew not to disrupt the kids’ games. Now, people don't. They wait kind of glaringly for the kids to stop what they're doing so they could pass, and I just think that's so different. There was this deep respect for children and children's games and the way children needed to be in the world that I don't feel like exists as much anymore.

SP: Are you nostalgic for your childhood?

JW: For my childhood? I don't want to go back there but I want it remembered.

SP: So the picture, at least for a good chunk of the book, is it's kind of a beautiful view of childhood and particularly the friendship among these four girls. They’re all smart and talented and the world is just full of possibility ahead of them. How would you describe these girls?

JW: Exactly as you did! When they're with each other, they create this kind of human shield that allows them to be who they are in their world, safely.

SP: And how old are they when they first meet?

JW: When they first meet, they're in grade school, so they're around fifth or sixth grade. And when they finally start realizing they're kind of on the edge of adolescence, they begin to realize how much more they need each other, how they need that kind of bond — that human shield — that they become for each other. At one point, I talk about how boys didn’t understand girls together; they understood girls alone, hiding their chest, praying for invisibility. With each other, they allow themselves to be very visible in the world.

SP: And probably pretty intimidating to those boys.

SP: It's worth pointing out that I mean you are your best known for being a children's book writer. This one is an adult book. Is there a particular piece of childhood that you want to tell us when you write about children?

JW: I want to talk about all of it. At the beginning I say "What is tragic isn't the moment, it's the memory," because once you start looking back at it from your adult perspective, you start seeing the kind of fissures in it, right? You start seeing all the places where the veneer begins to crack.

But when you're in it you're not aware of that — you're just aware of the deep joy or the unfairness of being a child in an adult world, or the heartbreak of a friend who says, "I'm not speaking to you anymore" or whatever those things are. And as I was writing it, all of that came flooding back to me; that adult perspective that I have now and also the deep memories of childhood.

SP: How do you call up your memories of childhood? Is just lodged in your brain or is it sort of through the act of writing that it brings it back?

JW: It's both. I have so much memory of childhood.

I remember as a kid my mom would always say "You couldn't possibly remember that." And I'm like "well, how do I remember it?" But then once I go back into that memory more memory comes. I also use music.

SP: What do you mean you use music?

JW: I never write without music on. I always wear headphones when I write.

SP: Contemporary music or music back of the period that you're writing about?

JW: A combination — I have one playlist that just gets me into writing, and it's the same set of songs that I've been listening to for probably about 10 years.

SP: Can you tell me what some of them are?

"Harvest Moon" by Lauryn Hill, a couple of songs in "The Miseducation of Lauryn Hill."

I put it on and it takes me out of this world into the world of the narrative.

SP: The other thing that happens in your story — as these girls become teenagers and they start growing up sexually, they realize there's also a world of danger here. There are predatory men lurking around. There's the fear of pregnancy, which could be disastrous for these girls. Were those big issues for you and your cohort as you were growing up?

JW:  Definitely the predators. I think that it's the reality of every girl, because our growing up is so visible to the world. You see bodies developing, and it's nothing we can hide — and we don't want to hide it, right? We don't want to suddenly wear baggy T-shirts and have that kind of invisibility because we're also celebrating ourselves as coming into adulthood. And there's this way in which we want to be desired, so it is that tricky place of balance that young adolescent girls haven't quite learned yet.

In terms of pregnancy, in my crew, I mean, we were some geeky girls, and in this way we knew we weren't going to get pregnant because I think we were too afraid. I was terrified. My mom said, "You know, you better not get pregnant."

SP: You came from a pretty religious family.

JW: Yeah, I grew up Jehovah's Witness, but that doesn't mean I wasn't fooling around. But I knew the line was drawn: if I were to get pregnant as a teenager, my life would be over.

SP: It strikes me that this world that you're describing doesn't tend to get into books — it's fairly unusual literary terrain, being a black girl in the 1970s in Brooklyn. Are there other stories like that?

JW: There's a great book by Brit Bennett called "The Mothers" that explores it in present day, but I think of Toni Morrison or Zora Neale Hurston back in the day. But yeah, this story, I don't think a lot of people are telling it yet.

I think that black girl narrative is so rich — I didn't grow up reading it, and it's so important to me that I needed to put it on the page.

SP: Do think people or communities carry history with them? Is there sort of a collective history that's deeply embedded in us that we carry on into the present?

SP: What do you mean by that?

JW: Stuff that happened to my ancestors is in my DNA.

So one thing — my fear of water and people's fear of what we call "the Middle Passage syndrome." Because of the slave trade and coming over those huge bodies of water in the bottom bowels of these ships. And (we just have) that fear of open bodies of water, and what is on the other side of them or if you're going to make it across.

I think as kid, if you put me in a pool that's five feet deep, I can swim across it 20 times. But if you put me in the ocean, I would probably drown, I just can't. Psychologically, I can't make that connection to how buoyancy works in water because of something that's deeper and older, I think.

Even in writing "Brown Girl Dreaming," there is this way in which I feel like every time I sit down to write, the ancestors are in the room helping me tell that story.

When people don't have a connection to their past I kind of look askance. I'm like … what happened to it? What is it you're trying to hide? Or forget?