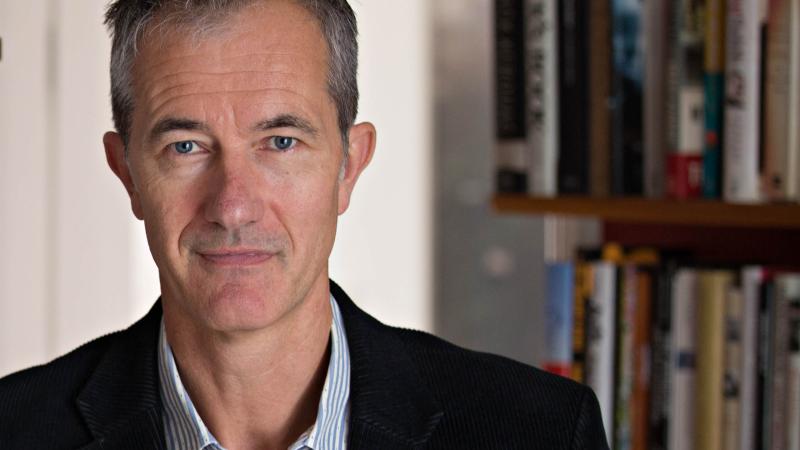 You know how sometimes a movie just gets under your skin? You watch it over and over. You can sing the theme music. You can quote the director. Writer Geoff Dyer is the author of "Zona: A Book About a Film About a Journey to a Room." It chronicles his 30-year-long obsession with a Russian film maker Andrei Tarkovsky's 1979 film, "Stalker.

Geoff Dyer: The storyline of Stalker is so incredibly simple. There's this place in an unspecified country called The Zone and it's forbidden. You're not allowed to go there. It's surrounded by some sort of military cordon and there's a guy called a Stalker who's really a guide and he is taking two clients, one called Writer and Professor, into this zone. At the heart of which it's claimed, although there's no proof for this, your deepest wish will be realized. It's important to emphasize that it's not say three or four of your top wishes. It's only your deepest wish and that's it really. That's the plot of "Stalker" which lasts two hours and 40 minutes reduced to about 25 seconds. "Stalker" was released in England in 1981. I went because it was very, very favorably reviewed and it was incredibly slow and I would be lying if I said it was one of those afternoons were I look back and yes, it changed my life because although I could see the film had all sorts of qualities, it certainly wasn't love at first sight. I didn't come out of it overwhelmed, but what happened is that it continued haunting me for an awful long time. Approximately 30 years. After that first time I saw it, there was certain scenes in it that stayed with me. In a way that's quite a general thing. If you go to any film, however bad, there's always a brief period when you emerge from the theater when the world outside is kind of tinted by what you've been seeing inside.

Now with a really insignificant film, that actually probably lasts for about two or three seconds and I think the better the film the longer that experience where by the world itself is reconfigured by what you've seen and for me with "Stalker," all sorts of little things would come up. Both interior scenes and certain moments in landscapes would just bring me back and remind me of something in the film to the extent that I wanted to go back and see the film again, if you like, to verify if my memory of it. If the kind of evoked memory coincided with what was really there on the film and one particular occasion, I was walking with my then-girlfriend in Richmond Park in West London and we saw a bird flapping low over the sloping landscape in a way that was so reminiscent of a famous moment in the film when a bird flaps over this weird interior landscape of sand dunes in the Zone and then, in the film, one of these strange, magical moments happens. The bird just disappears and that was when I really did decide that I had to go to see it again.

You know there are so many scenes in "Stalker" that make tears come my eyes now. So the film is two hours and 40 minutes, I could probably two hours and 40 minutes describing the sequences that make me cry. There are a number though that I need to emphasize, I think. The first one is when they arrive in the Zone after this long tracking sequence of the three men's faces as they're moving along the railroad track going into the Zone and then magically we're in this world of color and in the Zone. You know, there's no doubt about it. We're there. We're somewhere else. I mean, that is just a wonderful moment.

Shortly after that, the Stalker goes off for a walk on his own and he collapses on his knees into the grass in a state of ecstasy, I would say, and it's so incredibly moving because he believes absolutely in this place and its magical and its redemptive powers and it hasn't disappointed him. I mean, I find that as a moment of affirmation quite extraordinary.

We're told that one of the consequences of going to the Zone is that children of Stalkers tend to be born with deformities and we've seen that the Stalker's child, this young girl called Monkey, we've seen that she's crippled. That she can't walk and then, when they get back from the Zone, they're in black and white but then we shift to a very close, a very tight, shot of Monkey in profile in color and she's walking and it's this beautiful thing. It's a miracle. She can walk, but it's a miracle that even Richard Dawkins would be happy to accept because it turns out that actually as the camera moves back, we can see that she's not walking, she's just on her dad's shoulders. He's giving her a ride like that and as the camera pulls back, we can see Stalker walking with the kid on his shoulders with his wife. Unbelievably beautifully with this doggy that he's brought back from the Zone, which is proof in a way that they've been there, and they're walking through this absolutely desolate sort of post-industrial, bloated, Eastern European landscape and it's so beautiful. I find I'm overwhelmed by that and then, perhaps I shouldn't say what it is, but the very last sequence when it's revealed to us that yeah, even though the daughter is physically disabled, the sort of compensation for that is considerable.

The journey to the Zone is in many ways a very, very literal one. A lot of the film is taken with their getting through the Zone to this place, the Room, where their deepest wish will come true. The closer they get to this fabled Room, the slower their progress becomes, and the more they get burdened down by these sort of philosophical discussions and quarrels and fights and then it turns out incredibly that one of the people is going to try to destroy the room. So there's this kind of quite funny fight sequence. There's these three old guys kind of wrestling in a puddle. They've come all this way, at considerable risk, to enter the Room where their deepest wish can be realized and then, for different reasons, they sort of balk and hesitate about that and the reason for this is because, as Stalker emphasizes, it's not just any wish. It's not just what you think you might want, which would be, you know, well I don't know what you might want. It's only your deepest wish which means that your true nature will be revealed to you.

If one thinks about that for a second, you know, when you're a kid you always jump at the chance to sneak at peek at people's diaries or to hear what people have said about you, but actually as you get older you realize you're probably better off not knowing what people really think about you and so this thing, the Room, which has seemed such a marvelous place; there's an aspect of horror about it too. As what you'll do is you'll look in the mirror and see yourself, not as you believe yourself to be, as a rather nice, considerate, caring person but potentially and there are stories about such things happening in the film. Potentially as a rather, you know, as a rather lesser, more maligned, selfish person.

Any philosophical points, I think, are also constructed. They're made by the movement of the camera. There's a lot of stuff about perception and what we're seeing in the film, even our sense of how long they're there, how much ground is being covered, that's being controlled, manipulated, and indeed constructed by the movement of the camera. There are three people, three characters, in the Zone. Stalker, Writer, and Professor, but you're also aware of this other. This fourth presence and it's the camera that's there very much as a character in its own right and in some ways you get the impression maybe the camera is the kind of sentient spirit of the Zone itself.

As I've done events in different countries, I've been so surprised at the way that people would come up to me afterwards and say, "Let me tell you about the first time I saw Stalker." They would describe the circumstances. They would remember the cinema where they saw it and it was funny. I became so conscious of this when I was doing a gig in San Francisco, which I visited a lot, and I always remember when I first went to San Francisco. This was back in the 80's. You know, I'd get people talking about this transformative experience. The night they first ever went to a gay bar. This moment when they were able to become themselves and people were recounting the first time they saw "Stalker" in similarly transformative terms.

My book, "Zona," it's about this film but it's also about the way that certain big, artistic experiences, they really form who you are. I mean, they really become part of you. They shape your whole sense of what it is to be alive and it's also, I think, very- I mean, in a way I can see it that it's a nostalgic book because that time when one was completely at the mercy of both art house cinemas and their scheduling and film festivals. You would be aware that certain films had this great reputation and you might have to wait a considerable length of time before you got a chance to see them. So it's very much about as well the magic and the power of cinema. There's a load of debate. All sorts of commentary about what the Zone is in Tarkovsky's film and it seems to me that, I mean, we could talk about that until the cows come home but the Zone is about, you know, the wonder of cinematic space and the things that can revealed and that can be made to happen there.