How Loneliness Can Lead to Totalitarianism 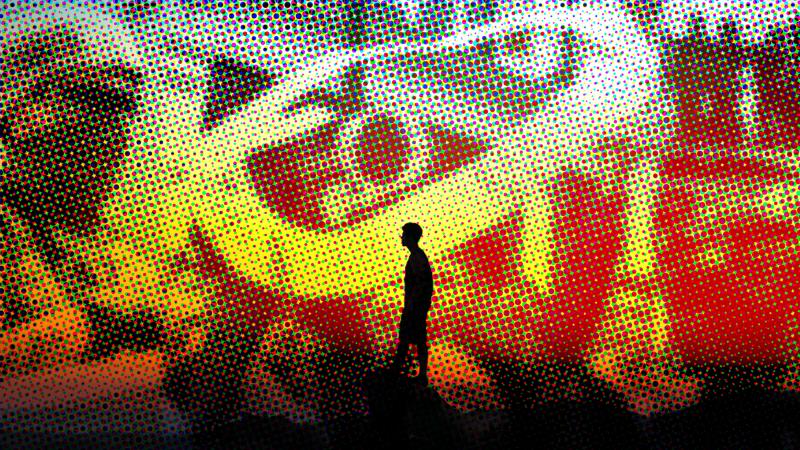 It’s been a lonely year. Even before the COVID-19 pandemic, rates of loneliness were skyrocketing around the world. Dr. Vivek Murthy — who later became Surgeon General within the Biden Administration — called it a silent and dangerous epidemic.

And now? The agony of spending so much time alone or in a tiny bubble is crushing many people.

For all the talk about loneliness, though, philosopher Samantha Rose Hill believes we don’t really understand it. We mistake it for social isolation; loneliness, she says, is different. It’s the uneasy encounter with ourselves that we all experience at times. And if we’re not comfortable with that kind of serious self-examination, we’ll try to run away from it.

Hill, a visiting professor at Bard College who’s writing a book about loneliness, says it has a political dimension, too.

"Loneliness is also a reflection of the crisis of democracy that we’ve been facing in the United States and around the world with the rise of illiberalism and populism," Hill said.

She draws on Hannah Arendt’s classic 1951 book "The Origins of Totalitarianism," which argued that dictators like Hitler and Stalin preyed on people’s loneliness to isolate and control them. Hill says some leaders in democratic countries still use this kind of "organized loneliness" to wield power.

She spoke to Steve Paulson for "To The Best Of Our Knowledge" about the personal and political aspects of loneliness.

Steve Paulson: Why is there so much concern about loneliness now?

Samantha Rose Hill: We’re facing an existential crisis in our lives, and loneliness often appears when people are hungry for meaning. When people talk about loneliness, they’re often actually talking about social isolation. But they’re not the same thing, and I think this is kind of a dangerous way to understand loneliness.

We need to do the work of depathologizing loneliness, which is part of the human condition. Everyone feels lonely from time to time. It's only in recent history that loneliness has become the purview of medical experts instead of humanists and philosophers.

SP: The UK has a Minister of Loneliness and the U.S. Surgeon General has called loneliness a public health crisis. Is this the wrong way to think about it?

SRH: That’s the right way to approach the phenomenon of social isolation — the fact that people now tend to spend more time in front of their screens or alone by themselves rather than in physical community with other people. But yes, the experience of loneliness is treated in these medicalized discourses as something to be cured. It's often understood in comparison with solitude as the unwanted twin.

SP: The distinction I've heard is that solitude is what people actually want, whereas loneliness is usually described as something you want to overcome.

SRH: Yes. Solitude is that pleasant experience of being home alone, sitting in front of a fire, reading a book, having a conversation with yourself. You're in harmony with yourself. But loneliness is an uncomfortable experience, and it's an experience that people often want to run away from. A lonely person is not comfortable with silence, so they have to be talking or keeping themselves busy.

When we experience loneliness, we're confronted with ourselves. Who am I? Why am I here? What is the meaning of life? How should I live?

SP: You’ve been studying loneliness for years. You're writing a book about it. You teach a class on loneliness. Does this interest come out of your own life?

SRH: Yes, I'm interested in loneliness (both) personally and politically. I grew up very lonely. I am a working class kid from Michigan — the first person in my family to graduate from college. My first memory is of my mother threatening to kill me.

SRH: Both of my parents struggled with mental health issues and alcohol and drug addiction. I grew up with a deep sense of rootlessness.

I think my imagination saved me and so did books. I fell in love with literature at an early age. And it was really finding Tennessee Williams and his play "The Glass Menagerie" that gave me an idea of what escape could look like. This is one of the wondrous and terrifying things about the experience of loneliness. It can give you the opportunity to draw your own cartography.

SP: It sounds like your loneliness was partly liberating, maybe even life-giving.

SRH: It was once I learned to embrace the experience. I spent the better part of my teens and 20s looking for a sense of community because I was running away from loneliness. When I was 19, I lived in an amusement park. I ran off with a cult for a couple of years. I've converted through several religions.

(Once) I realized that I had to stand face-to-face with my loneliness and accept it as a comrade that would accompany me through life, it was liberating.

SP: You said you're also interested in the politics of loneliness. We don’t usually think of loneliness as having a political dimension.

SRH: I was drawn to the political side of loneliness through the work of Hannah Arendt, who is a 20th century political thinker that I've spent a lot of time thinking with.

SP: It's worth pointing out that Hannah Arendt was a Jew who barely escaped Nazi Germany.

SRH: She was captured by the Gestapo in 1933 in Berlin while researching anti-Semitic propaganda in the Prussian State Library. She was held for about eight days before she was released and then escaped the next morning through Czechoslovakia. Eventually, she made her way to Paris, where she spent eight years helping Jewish youth emigrate to then-Palestine. And then in 1940, she was interned in the south of France for five and a half weeks before she was part of a mass escape with 62 other women.

SP: So Arendt knew intimately what a totalitarian government could do to people.

SRH: And she knew loneliness intimately, as well. She was always an outsider, a pariah, but she was attuned to why loneliness is so powerful. She argues that loneliness is the underlying condition of all totalitarian movements.

(Arendt) describes how the experience of loneliness in the 20th century was transformed by these political regimes of Hitler and Stalin from an occasional occurrence into an experience of everyday life. The organized loneliness that underlies totalitarian movements destroys people's relationship to reality. Their political propaganda makes it difficult for people to trust their own opinions and perceptions of reality.

SP: So instead, they believe what the political leaders are telling them about their lives.

SRH: Precisely. Arendt understood this political form of organized loneliness to be characterized by cynicism that leads people down rabbit holes of thought, always thinking the worst while convincing them that there is a true reality beyond the reality of everyday life that we share. You destroy their relationship with themselves, which isolates them and cuts them off. This makes people hungry for meaning. The regime creates the conditions for loneliness through political propaganda, while also meeting that hunger for meaning by telling people how to think and who to blame.

It’s chilling, frankly, because we’ve just lived through the thousands of lies that Donald Trump told, and the 2020 election which he claimed was stolen, despite overwhelming evidence to the contrary.

SRH: It is the kind of thing she was talking about. (Today) we see this form of organized loneliness not in totalitarianism but in tyrannical thinking. But we see it in the emergence of populism from the left and the right. And we see it in the Republican Party, which is comfortable rejecting the facts of science in the face of a deadly pandemic and where the president of the United States is unable to accept the reality of electoral defeat.

We also see it in the rise of internet conspiracy theory groups like QAnon. This new appearance of tyrannical thinking is driven precisely by the kind of ideological thinking that Hannah Arendt was describing in "The Origins of Totalitarianism."