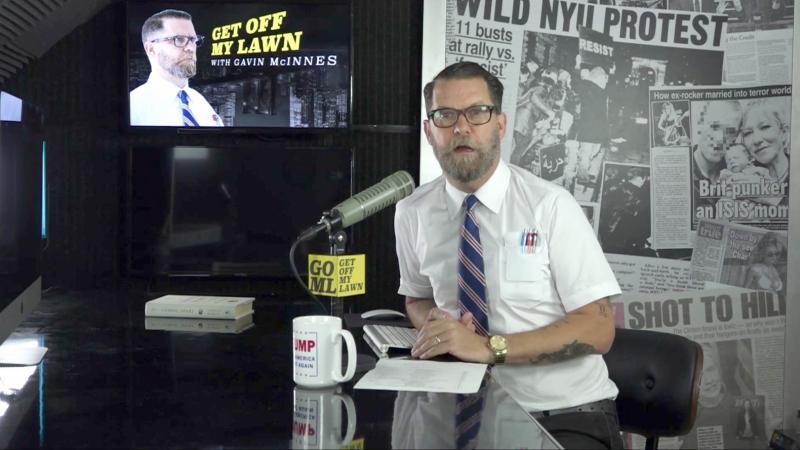 Right-wing provocateur Gavin McInnes says he founded the Proud Boys in response to the “war on masculinity.” Here McInnes appears on his online talk show, “Get Off My Lawn.”
Get Off My Lawn (CRTV)

A thought experiment: label a group of men "racist" or "Nazi," and they recoil at the suggestion that they hold hateful views. Label the same group of men "sexist," and they wholeheartedly agree. What does that difference say about our society's attitudes toward women in 2018?

That dichotomy stood out in the conversations that investigative reporter Alexandra Hall recorded in the course of her work on an in-depth piece about the Proud Boys, a grassroots men’s group with chapters across the United States, Canada and elsewhere whose founder Gavin McInnes preaches libertarian political views and the conviction that most women belong at home, making babies. McInnes has a blunt response to dissenting opinion on that: “feminism is cancer.”

McInnes was a co-founder of Vice Media, leaving the publication in 2008 over "creative differences." Today, he hosts a popular right wing online comedy talk show called Get Off My Lawn, rooted in the tradition of shock jock radio. He is scathingly funny, combative, and gleefully politically incorrect.

Since Trump’s campaign, McInnes has become a more serious political agitator. He founded the Proud Boys in 2016 as a "pro-Western fraternal organization" for men "who refuse to apologize for creating the modern world." One of the group’s core tenets is “Venerate the housewife."

The Proud Boys attracted a flurry of media attention — including from This American Life — in the wake of the Charlottesville protests, when it was discovered that one of their members co-organized the "Unite the Right" event. That member has since been disavowed by McInnes, and he pushes back strongly against any suggestion that Proud Boys members might condone white nationalism.

But McInnes and his Proud Boys have no qualms about espousing an anti-feminist ideology and some startlingly chauvinistic views about women. McInnes told reporter Alexandra Hall he started the Proud Boys because “there’s a real war on masculinity in this country. It starts in kindergarten and goes all the way up to adulthood, and it’s not natural.”

McInnes made some pretty strong claims during his conversation with Hall, so at the end of this piece, we've included academic reading and supplementary reports on the broader conversation around issues including sexual assault on college campuses, the pay gap between genders, and the challenges of having children later in life.

This transcript has been lightly edited for clarity and length.

Alexandra Hall: Can you tell me what the Proud Boys are about?

Gavin McInnes: Yes. Nothing! It's just a men's club. What is the Knights of Columbus about? What are the Elks Lodges about? What are all men's groups about? It’s just guys hanging around. There's no big massive agenda. There's no secret ritual or big plan to start World War III, there's no political criteria to get in. All of that has been injected by the liberal media, by fake news.

Politically — if you had to nail us on the spectrum — I would say 95% of us land on the "new right." They're socially liberal, fiscally conservative. They don't really care if you're gay or anything like that, but they think that tradition has some value, and we've thrown out the baby with the bathwater, quite literally. And women are letting their ovaries dry up for some stupid career like blogging. How old are you?

GM: Oooo. So, you're right there. You’ve got to stop dating comedians and musicians, and start thinking seriously about your mate.

AH: Yeah, yeah. Cool. What do you think about feminism?

GM: I think feminism is obsolete. It had a place — women needed to vote and drive. But I would say feminism was done in maybe 1979. Since then, it's just been women inventing problems and lying in order to create a world where feminists are needed. Like saying 1 in 4 women will be sexually assaulted or raped in college, or saying that women earn less than men and there's a wage gap — just blatant lies to justify their existence.

AH: You think those statistics about sexual assault and the wage gap aren’t true?

GM: Well, I don't think you've looked it up if you think they are. Which makes me think you don't care, which makes me think you need to find a man. You need to focus on creating and shaping lives, because you don't sound like that tiny percentage that would be better off in the workforce. I think you'd make a great mom. You're clearly curious. Why not be curious about the quality of the schools your kids are at?

And no, for the record, women earn more than men when they're your age, before they make babies. They end up earning less over time because they tend to choose jobs that are less strenuous, less risky. They go home for their daughter's piano recital rather than stay at the office all night and that costs them promotions. The wage gap is an easy myth to debunk, and when feminists harp on it, I go "yeah, you're pretending to care. You're virtue signaling and it's a pain in my ass."

AH: Do you have a source that debunks that myth?

GM: (laughs) This is news to you? Do you know that Santa's not real? You’ve obviously never read a book about this subject, and I think that’s because your heart’s not in it. And that’s because I don't think that you're meant to be an investigative journalist. I think you're meant to be a mom. You represent the 95% [who would be happier at home], and the pendulum of feminism has swung so far against what's natural that you feel, I'm guessing, that that would be "selling out," and “well, maybe when I'm 40 I'll settle down and have a kid.” After your eggs are completely gone and you can have 8 or 9 miscarriages like that black actress...after it's too late.

AH: Is this what “venerate the housewife” means?

GM: To venerate someone is to put them on a pedestal. We think giving birth is a magical thing. We don't see the housewife as some slave stuck in the kitchen making us spaghetti. We see her as this sort of goddess of the home, who creates and shapes the lives in it, who helps the community have cohesion. We [men] just go out and work on the factory floor, on the assembly line all day, and then we come back to this oasis, this beautiful paradise.

AH: What are the Proud Boys hoping to achieve?

GM: One thing we really push is “no wanks," which is our anti-masturbation, anti-porn campaign. We want men to date. Men have been so castrated by feminism and all this anti-male, “oh that’s rape, that’s sexist, that’s toxic masculinity, you’re horrible” stuff that they don’t don't date anymore.

AH: One of your members sent me a message on Facebook asking 'should I bring the condoms' to our interview 'because I know when you hear the truth, you're gonna be ready.' Is that family values?

GM: (laughing) That's funny values. If you're going to play with the big boys as a journalist, you should have a sense of humor. You can't be a church lady and simultaneously a feminist. Are you like, “I’m just a journalist, I'm one of the guys. Oh, someone made a joke, now I'm a lady.” It's like women don't want to be equal to men, they want to be treated special.

AH: That seems like it conflicts a lot with what you're saying and your theories about venerating women.

GM: You think bringing condoms was a demeaning, sexist thing to say?

GM: Because you're a 29-year-old adult! What do you want me to do, chastise him? You want the door held open for you or you don’t?

GM: Because not making a condom joke is holding the door open.

AH: Okay… I guess I'm just trying to understand what you're saying in relation to all of this other stuff that you said about...

GM: No, you're not. You're not trying to understand anything. You’re trying to make this story fit your narrative and to do that you have to pretend that you don't get jokes and that I'm inconsistent and that I'm ignoring the looming Nazi threat. And I think it's evidence that you're doing the wrong job.