What Would A Free Catalonia Mean For Spain — And the World? 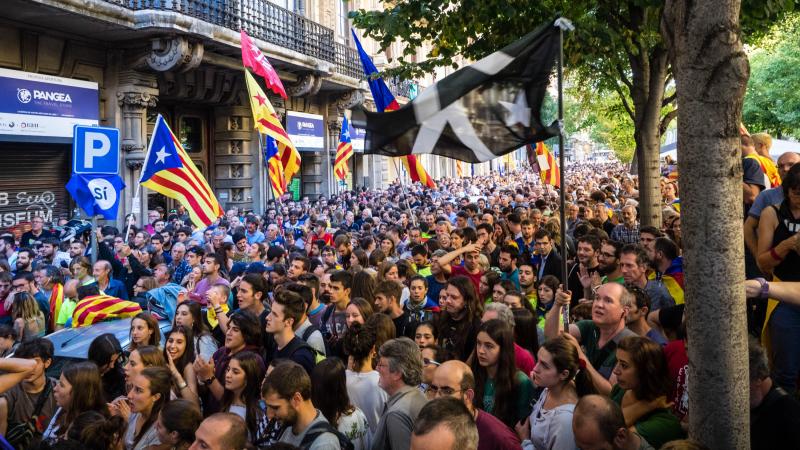 As I arrived in Barcelona in March, a protest had just erupted, with thousands of people marching and blocking streets and narrow pathways, shouting, and many wearing the flag of Catalonia draped around their shoulders like capes. The police, too, were out with riot gear and masks.

Catalans are known for being peaceful people, and while the crowds were large, and the feeling of unrest palpable, it was not a violent gathering. But the conflict is in no way over.

Spain is now in a crisis of politics and identity. Catalonia is a region within the country that is trying to become independent. Part of the debate is that the area, which includes Barcelona, is very wealthy (about one-fifth of the Spanish economy), and many Catalonians think they are paying more of their fair share of taxes to Madrid.

But it’s also a case of cultural identity. This area of northeast Spain has its own language, flag and anthem. It has its own food and traditions.

The Catalan flag with its yellow and red stripes and blue triangle with a single star, can be seen all over Barcelona, and is even more prevalent in the medieval town of Girona. Yellow ribbons tied on trees, people wearing yellow ribbon flags and yellow flags graffitied on walls symbolize support of the independence movement. There is a sense of people choosing sides.

More than 2.2 million people voted in a referendum on the issue in October. The Catalan government says the vote in favor of independence was close to 90 percent, but that the turnout was only about 42 percent. It is truly a divided country.

The referendum was declared illegal by the Spanish Constitutional Court. There were clashes between police and those in favor of independence. Catalan leaders declared victory, but the Spanish government fired them. The Catalan president, Carlos Puigdemont, fled, and has been imprisoned in Germany. This is why thousands were protesting the day I arrived in the city.

Before the Spanish Civil War, Catalonia was more independent. But then, General Francisco Franco, a military dictator, took power, in the 1930s, and forbade the language from being spoken. He was supported by other fascist dictators, Mussolini and Hitler. The democracy was finally restored in 1975, after Franco’s death.

Since then, Catalans have become more independent again, leading to this moment of trying to break free. It is still a culture of art and music, great food and drink, like herbed vermouth and the pan con tomate served with most meals (toasted bread rubbed with ripe tomato, olive oil, garlic and salt). There are rituals, too, like a tradition of celebrating St. Jordi on April 23, when people give roses and books to each other, celebrating both the patron saint of love and the anniversary of the death of Miguel Cervantes.

Standing as a historical reminder, is San Felip Neri, a tiny square in the gothic quarter of Barcelona. There’s a baroque church, and a fountain there, and several acacia trees. The town shoemaker used to be there. In 1938, during the Spanish Civil War, the square was bombed by Franco’s planes, killing 42 people, mostly children. The church bears scars of this bombing and the shrapnel is still lodged in its walls.

It’s also the church where architect Antoni Gaudi went to pray, every day, and where he was headed when he was hit by a bus and died at age 73.

While the square holds history and sadness, there is hope, too, that the conflict will end peacefully this time around. People from other countries are watching closely—if Catalonia becomes independent, what will it mean for the rest of the world?