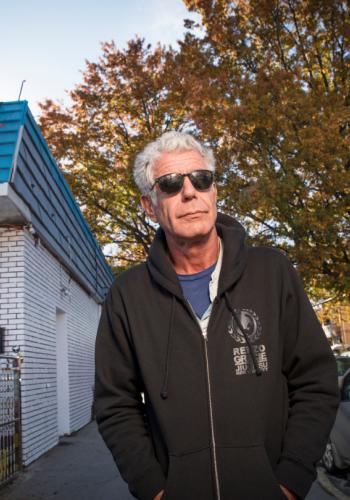 Last year, before the premier of Season 9, Explore Parts Unknown—a mobile-first, online component of the hit TV show—entered the scene. An editorial partnership between CNN and Roads & Kingdoms, Explore Parts Unknown highlights our shared obsession with travel and adventure, giving Bourdain super-fans an even greater opportunity to learn what Anthony Bourdain knows, go where he goes, eat what he eats, and see what he sees.

Bourdain’s gritty, unflinching nonfiction book Kitchen Confidential: Adventures in the Culinary Underbelly, first brought him into the spotlight in 2000, but since then it has been his unslakable thirst for travel and learning that has made him an Emmy-winning host and now the creative force behind this website.

In the Emmy-winning original series Anthony Bourdain: Parts Unknown, Bourdain takes viewers on a journey to the far corners of the world. Wherever he goes—Queens, Antarctica, Sri Lanka—we go, watching as Bourdain takes a deep dive into each destination’s culture, cuisine, and politics. Bourdain is no stranger to the pleasures of local food and whatever beer is on tap in that city, country, or continent. But he also takes advantage of the opportunity to ask important questions in a sincere attempt to better understand his hosts, their hopes and their lives.