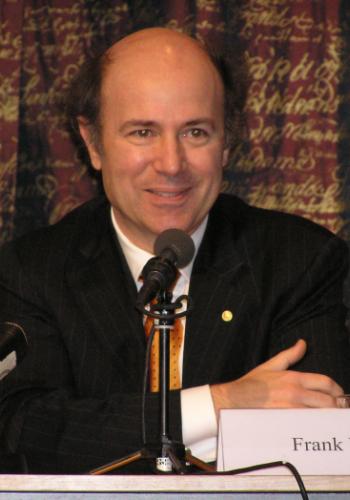 Frank Wilczek has received many prizes for his work in physics, including the Nobel Prize of 2004 for work he did as a graduate student at Princeton University, when he was only 21 years old.

He is known, among other things, for the discovery of asymptotic freedom, the development of quantum chromodynamics, the invention of axions, and the exploration of new kinds of quantum statistics (anyons).

Much in demand for public lectures to a wide range of audiences, Frank has been anthologized in the Norton Anthology of Light Verse and twice in Best American Science Writing(2003, 2005). His television appearances include "ghostbusting" for Penn and Teller (2005).

Longing for the Harmonies, a beautiful exposition of modern physics Frank wrote with his wife Betsy Devine, was named a NY Times Notable Book of the Year and has recently been re-issued in paperback. Frank is also the author of Fantastic Realities, a "playful yet profound" (to quote one reviewer) collection of his short pieces on wide-ranging topics, which concludes with a family's-eye view of the Nobel adventures, drawn from Betsy's blog Funny Ha-Ha or Funny Peculiar.

Early reviews have called Frank's latest book, The Lightness of Being, "a lively, playful, and inventive tour de force" as well as "a colorful and masterful treatment of recent developments in fundamental physics." A central theme of this book is that the ancient contrast between celestial Light and earthy Matter has been transcended. In modern physics, all the stuff out there is unified into a "Being" more like the traditional idea of light than the traditional idea of matter.

Frank grew up in Queens, NY and attended the University of Chicago. After getting his Ph.D. from Princeton, he spent time on the faculty there and at the Institute for Advanced Study, as well as at UCSB's Institute for Theoretical Physics, now the KITP. Frank is currently the Herman Feshbach professor of physics at MIT.