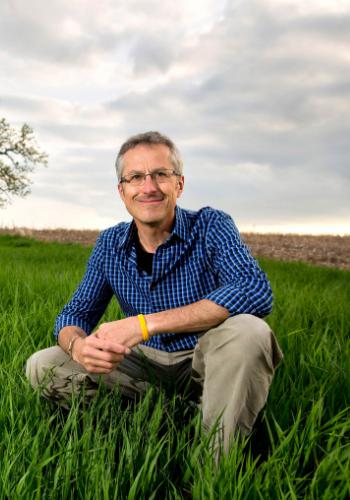 That Tree is an ancient Bur Oak growing on the edge of a cornfield near Platteville, WI. Using only his iPhone 4S, Mark Hirsch photographed the tree every day from March 24, 2012 until March 23, 2013 capturing a year long snapshot of life in and around the ancient oak. Today, Hirsch still photographs his storied tree with an iPhone sharing the images on Facebook and Instagram. Mark Hirsch (Mark Hirsch Photo LLC)

Mark Hirsch is an editorial and corporate photographer, artist, and an inspiring public speaker based out of the unlikely place of Dubuque, Iowa. Hirsch spent twenty years in the newspaper industry as a photojournalist, photo editor and visuals editor until ultimately embarking on a freelance career in 2006. His clients include Getty Images, The New York Times, and John Deere Corporation. Mark lives one mile from That Tree with a shaggy but lovable dog, Magnum (see photo August 7 – Day 137). When not lying in a sea of cold trying to capture photographs of That Tree, Mark enjoys spending his time mountain biking, and hiking in the hills and valleys near his Platteville, Wisconsin home.

In January of 2012 while recovering from a near fatal car accident, Mark purchased his first iPhone. He was encouraged by a friend to treat his new iPhone like his professional cameras. The first picture he took with his new iPhone was a photo of That Tree. He was instantly hooked! Mark had driven past and admired That Tree every day for nineteen years without ever taking a picture of it. This experience inspired Mark to embark on a unique adventure of making a photo-a-day of this lone bur oak tree in a Wisconsin cornfield. The year-long project was completed on March 23, 2013. “That Tree”, the fitting title of a full-color hardcover book, is published by Press Syndication Group (PSG).

Mark regularly exhibits his photos of That Tree in galleries, and his story has been featured by many worldwide media organizations including CBS Sunday Morning, National Public Radio, The Huffington Post, NBC News, The Daily Mail (UK), The Guardian, and The Sierra Club.\