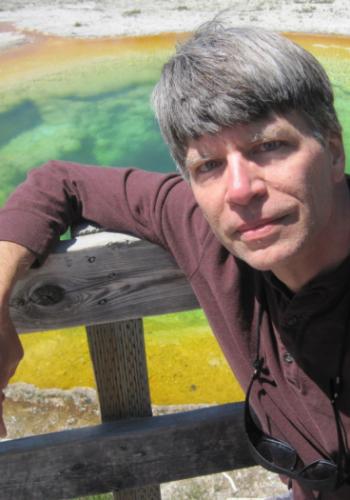 Powers’s characters themselves shift between the impulse to connect and its inevitable crash and burn; between the Emersonian urge to embrace the difficult ad-lib of the world and the Dickinsonesque need to recoil from its evident bruising into the supple sanctuary of the aesthetic enterprise, to withdraw into the secured refuge of a novel, a piece of music, a movie house, a museum, even cyberspace. Although long reluctant to encourage the distraction of biography, Powers has lived–like his characters–sustained within a curiously similar geography; never quite at home, never quite comfortable with belonging, shifting between engagement and escape. Powers was born 18 June 1957 in Evanston, Illinois, the fourth of five children, two older sisters and a brother and one younger brother. Early on, in the mid-1960s, his father, a high school principal with a working-class background, moved the family to the north Chicago suburb of Lincolnwood, an older neighborhood, Powers recalls, that was heavily Jewish. “My sisters and brothers and I would be just about the only kids in school for the high holy days.”

He continues, “I always had a sense that we weren’t quite native, a self-image compounded when we moved to Bangkok right before my eleventh birthday.” Powers then spent what he has frequently described as five “eye-opening” years in Thailand when his father accepted an appointment with the International School of Bangkok during the height of the American military presence in Southeast Asia. Amid such dramatic relocations, the young Powers discovered the aesthetic sanctuary: he tapped into both a sustaining love of music (an accomplished student of vocal music, he trained in the cello but also plays guitar, clarinet, and saxophone) and a restless curiosity fed by voracious reading. He recounts the impact of both the Iliad and the Odyssey (testimony again to a position between, on the one hand, the realist’s impulse to record the world with the historian’s eye and, on the other, the poet’s privilege to invent with the license of the unleashed imagination). His earliest reading passion, however, was for nonfiction, specifically biographies and science (he has cited particularly the impact of Darwin’s Voyage of the Beagle—which he read, amazingly enough, in fourth grade). He recalls, in part because of the panicked surge of interest in science following the Sputnik launch, the notion that he was somehow “destined to be a scientist.” Thus, as a teenager, he explored careers in paleontology, oceanography, and archaeology before ultimately choosing physics.

In his formal studies, however, Powers would soon find himself pulled between science and the arts. In 1975, he enrolled as a physics major at the University of Illinois. Following a pivotal course, an honors seminar taught by Robert Schneider, a charismatic teacher and an accomplished Freudian critic who Powers recalls convinced him that literature was the “perfect place for someone who wanted the aerial view,” he changed to English/rhetoric when he realized, with some frustration, that the sciences demanded, even encouraged, an intolerable specialization. In his literary studies Powers was drawn to the intricate narrative structurings of the first-generation European modernists (particularly the work of Marcel Proust, Thomas Mann, and James Joyce) and to the emotional dramas of Thomas Hardy—again Powers locating himself in between, drawn to both highly experimental modernism with its conception of the novel as a self-justifying architectural form and the compelling tradition of narrative realism that trained the open eye on the world itself. Powers completed his M.A. in late 1979. But the humanities could not provide Powers a secure space. He elected not to pursue doctoral studies as he feared finding in literary theory and criticism the same limiting need to specialize.

Powers moved to Boston in January 1980 and worked as a computer programmer and freelance data processor, skills he had developed ruing his off-hours learning the massive computer network systems at Illinois. Computer programmer by day, he continued his eclectic reading program, ingesting volumes of history, sociology, political science, aesthetics, and hard science theory, as well as a wide range of novels and poetry—”random pleasures, all over the map.” He lived near the Museum of Fine Arts, where he would spend Saturdays (admission was free before noon), and where, one week, he chanced upon an exhibit that included August Sander’s 1914 black-and-white photograph of three Westerwald farm boys heading, according to the title, to a dance. The image haunted Powers. “All of my previous year’s random reading just consolidated and converged on this one moment, this image, which seemed to me to [be] the birth photograph of the twentieth century.”

Within forty-eight hours he quit his job to devote himself to producing his first novel, Three Farmers on Their Way to a Dance, a project that took more than two years. “I thought: I’m going to put everything that I know in this book, because I’m never going to get another shot at this…Afterwards, I figured, I’d have to go back and do jobs that people are willing to pay for.” That novel, which explores the tectonic impact of artistic images, met with significant critical success, much to Powers’s surprise. Encouraged by the realization that he could make a living from writing, Powers moved to southern Holland—in part to withdraw from the distractions of his initial success in the United States but more to immerse himself in that region’s fascinating play of multiple languages and dialects and to secure the distance necessary to finish the draft of his second novel, Prisoner’s Dilemma, an unsettling work that audaciously juxtaposed Disney and the logic of nuclear warfare, a novel that Powers has described as his most American work.

While still in the Netherlands Powers completed his landmark work, The Gold Bug Variations, a dense and luminous story of love and death that intricately braids the metaphors of genetics, computer science, and polyphonic music. Two years after Gold Bug Powers published the much darker Operation Wandering Soul, which chronicled the slow-motion meltdown of a young resident-doctor confronting the harrowing realities of a pediatrics ward in a Los Angeles public hospital. Work on that manuscript was done during a yearlong stay in Cambridge and then completed when Powers returned stateside in 1992 to accept a position as writer-in-residence at the University of Illinois. Powers would use this academic experience to fashion Galatea 2.2, an ingenious retelling of the Pygmalion story using a bizarre university computer experiment in which an eccentric neurologist, assisted by a young, successful writer named Richard Powers, attempts to teach a computer network to respond to literature.

This alternating pattern of darkness and affirmation, doubt and celebration–the shifting from Emerson to Dickinson–marks his most recent work as well. In 1998 Powers published Gain, a disturbing narrative of an Illinois woman coming to terms at midlife with ovarian cancer most likely caused from the environmental carelessness of a nearby chemical plant, who two-hundred-year history Powers relates in alternating chapters. But in his follow-up work, the mesmerizing Plowing the Dark (2000), Powers chronicles both the grand efforts of a Seattle-based computer research team to produce the first self-contained virtual reality environment and the poignant narrative of an American teacher held hostage for four brutal years by Islamic fundamentalists in Beirut, a prisoner left to the devices of his imagination, the first virtual reality machine.

Named in 1996 to Illinois’s endowed Swanlund Chair in English and appointed to the Center for Advanced Study (1999), Powers continues to write, teach, and travel. He has recently completed his eighth novel, a sprawling generational study titled The Time of Our Singing (January 2003), with the properly ambitious themes of racial identity, the iterations of history, and the power of music. […]