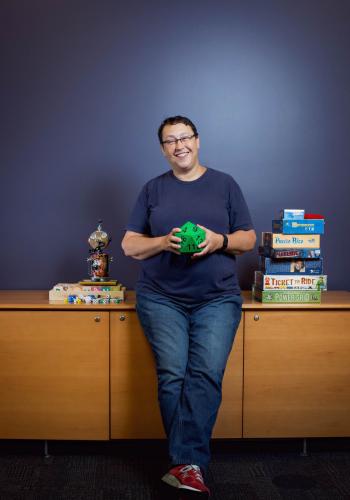 Game Designer
Tracy Fullerton, M.F.A., is a game designer, educator and author with twenty-five years of professional experience. She is currently Director of the joint USC Games Program, which is a collaboration between the School of Cinematic Arts and the Viterbi School of Engineering. She is also a Professor and Chair of the Interactive Media & Games Division of the USC School of Cinematic Arts. In December 2008, she was installed as the holder of the Electronic Arts Endowed Chair of Interactive Entertainment. Tracy is the author of Game Design Workshop: A Playcentric Approach to Designing Innovative Games. This design textbook is in use at game programs worldwide. Her research lab, the Game Innovation Lab, is a leading center for game design research. Recent credits include faculty adviser for the award-winning student games Cloud, and flOw; and game designer for The Night Journey, a unique game/art project with media artist Bill Viola. She is currently designing a game based on Henry David Thoreau’s experiment in living at Walden Pond. Also, she is leading a team of designers to create a suite of college knowledge games collectively known as FutureBound Games.

Prior to joining the USC faculty, she was president and founder of the interactive television game developer, Spiderdance, Inc. Spiderdance’s games included NBC’s Weakest Link, MTV’s webRIOT, The WB’s No Boundaries, History Channel’s History IQ, Sony Game Show Network’s Inquizition and TBS’s Cyber Bond. Before starting Spiderdance, Tracy was a founding member of the New York design firm R/GA Interactive. As a producer and creative director she created games and interactive products for clients including Sony, Intel, Microsoft, AdAge, Ticketmaster, Compaq, and Warner Bros. among many others. Notable projects include Sony’s Multiplayer Jeopardy! and Multiplayer Wheel of Fortune and MSN’s NetWits, the first multiplayer casual game. Additionally, Tracy was Creative Director at the interactive film studio Interfilm, where she wrote and co-directed the “cinematic game” Ride for Your Life, starring Adam West and Matthew Lillard. She began her career as a designer at Bob Abel’s company Synapse, where she worked on the interactive documentary Columbus: Encounter, Discovery and Beyond and other early interactive projects.