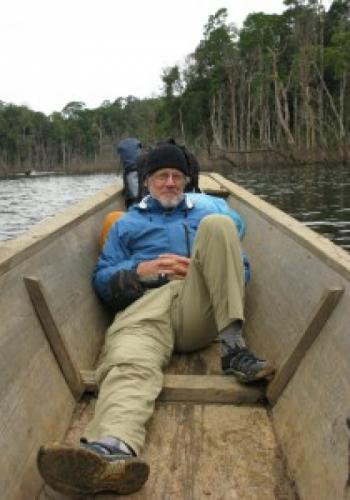 Writer and conservationist William deBuys is the author of nine books, which range from memoir and biography to environmental history and studies of place. A native of Maryland, he attended the University of North Carolina, where he was graduated with highest honors in 1972. Soon afterwards, the writer and social critic Robert Coles brought him to New Mexico as a research assistant, initiating deBuys’s deep relationship with the cultures and landscapes of the Southwest.

DeBuys’s books include THE LAST UNICORN (Little, Brown and Company, 2015), named one of Christian Science Monitor’s 10 best nonfiction books of 2015; A GREAT ARIDNESS: CLIMATE CHANGE AND THE FUTURE OF THE AMERICAN SOUTHWEST (Oxford University Press, 2011); ENCHANTMENT AND EXPLOITATION: THE LIFE AND HARD TIMES OF A NEW MEXICO MOUNTAIN RANGE (UNM Press, 1985), which won a Southwest Book Award and is now in its ninth printing; RIVER OF TRAPS (UNM Press, 1990; Trinity University Press, 2008), which was recognized as a New York Times Notable Book of the Year and was one of three finalists for the Pulitzer Prize in General Non-Fiction in 1991; SALT DREAMS: LAND AND WATER IN LOW-DOWN CALIFORNIA (UNM Press, 1999), which won the Western States Book Award and several other prizes; SEEING THINGS WHOLE: THE ESSENTIAL JOHN WESLEY POWELL (Shearwater Press, 2001); VALLES CALDERA: A VISION FOR NEW MEXICO’S NATIONAL PRESERVE (Museum of New Mexico Press, 2006), winner of a Southwest Book Award; and THE WALK (Trinity University Press, 2007), an excerpt from which won a Pushcart Prize in 2008. He co-authored FIRST IMPRESSIONS: A READER’S JOURNEY TO ICONIC PLACES OF THE AMERICAN SOUTHWEST (Yale University Press, 2017), with the late David J. Weber.