The American Guards Who Kept Saddam Hussein Safe Until His Execution 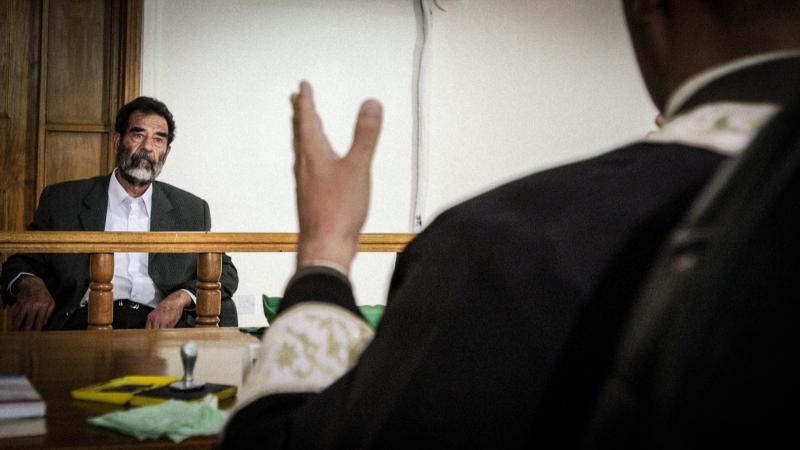 On December 20, 2006, Saddam Hussein, the deposed president of Iraq, was executed by hanging, three years after being found by US forces in Adwar, near Tikrit, in his now infamous “spider hole.”

The months prior to his execution, Saddam Hussein was tried and found guilty of crimes against humanity. The defiant Hussein repeatedly claimed innocence on all charges, his courtroom antics and tirades during the trial are legendary. He repeatedly accused the US soldiers that guarded him of regularly beating and even torturing him in captivity.

Those guards were dubbed the “Super Twelve,” and their story is told by author William Bardenwerper in "The Prisoner in His Palace." They were young men — many just out of basic training — who spent months, often in 8 hours shifts alone, in close quarters with a man the rest of the world reviled as “The Butcher of Baghdad.” Their charge was to protect this man through the trial, seeing him through to his hanging and its violent aftermath.

One of those guards was Private First Class Adam Rogerson, a young soldier from Ohio. Recently, a decade after the execution, Charles Monroe-Kane sat down with Rogerson to find out what it was like guarding Saddam Hussein.

Charles Monroe-Kane:  What was it like the first time you met Saddam Hussein?

Adam Rogerson: You could hear him sleeping. Once he heard us come down, he got up to use the bathroom. I'm just standing there thinking "I can't believe that Saddam Hussein is taking a leak right here." I mean this is the first time I ever meet him. It was just weird.

But when it's nighttime and he's relaxing and smoking a cigar, he just wants to B.S. We would listen to the radio. We would sit by his little electric heater, and we would pass the time. He was passing his time and I was passing mine.

CMK: Do you remember any stories he told you?

AR: He was looking at pictures one night smoking a Cohiba. I was sort of just checking out what he was doing and there were pictures of Fidel Castro and him on a boat and I was like "that's kind of cool."

I'm like "you guys hung out?" And he's like "yeah, you know, he's the one who got me started smoking Cohibas" and I was like "wow, this is crazy." Just to hear him like reminisce about smoking cigars with Fidel Castro. People have cool stories. But he probably had the coolest.

He never talked to me about the evil stuff that he did. It was almost...I got the vibe, and this is just me, that he was almost sorry. He was getting up there in age and he was remorseful for the things that he did.

CMK: You know all that all that time you spent with him...do you feel like you're like you became friends with him?

AR: I would say a part of me. Anytime you're willing to lay your life down for somebody or for something you get attached to it at the end of the day. And 100 percent I was willing to give my life to for him. At 22 years old, that's a lot to take on.

CMK: You clearly in some way cared about him. I'm curious, do you ever do you think he cared about you?

AR: If something would have happened, maybe there are some people in the squad he might not have cared about as much. But if something were to happen and we would get overrun, I always thought he would show mercy on me.

CMK: Was there a moment when the two of you were alone that was like "hey this guy is showing me something more than just camaraderie." Did something happen that made you think that he cared about you?

AR: Well you know we would just spend a lot of hours together and you know you just get a vibe about somebody. We'd hear a mortar go off, and we would just make eye contact with each other and I would shake my head and sort of smile, and he would do the same.

CMK:  Can you tell me about his execution? What did he say to you when you delivered him?

AR: It was very sad. Once the commotion was over and we knew we were in somewhat of a safe zone, that no one was going to come get him. Just before he walked into the death house he turned around and said goodbye, and said that we were all his friends. Some of us were crying and he was sad. It was... it was crazy. I've been in firefights, I've been through IEDs. But nothing can prepare you for that type of situation.

CMK: Then he was hanged. What happened?

AR: We heard some commotion, we heard some yelling. And then we heard the floor drop out. Shortly after that, we witnessed him being carried above people's heads. We witnessed him getting spit on and kicked, and AK-47s going off. It was a really intense moment. When you're asked to protect someone and you just have that drilled in your brain you have to protect him. And then when you see the kicking and spitting on his body. . . I just have more respect and the presence of death I guess.

CMK: Are you traumatized by what happened in Iraq?

AR: Oh absolutely. 100 percent. I live with those demons every day. He was tried for his crimes and that is the judgment that they came down with. And I'm not saying that he didn't deserve it. I'm saying that as a 22-year-old soldier, maybe I wasn't ready for that.

You know, though I wasn't the one who dropped the floor out, sometimes I feel like I did.