The Complicated Denial of Watching Football 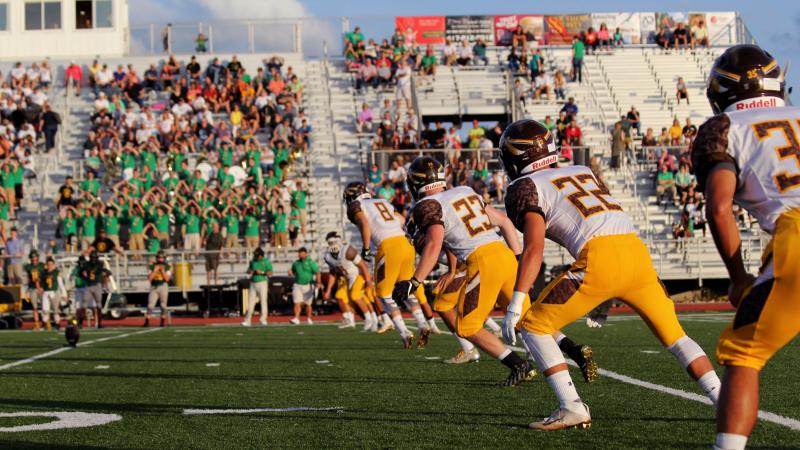 In this essay, Charles Monroe-Kane reflects on what prompted him to stop watching NFL games each fall season. It's not because he doesn't want to – author Steve Almond convinced him that even though the game is fun to watch, there are bigger issues to consider. A version of this story also appeared on Medium.

I will never forget my first time at Lambeau Field, where the Green Bay Packers play. I wore a red union suit and combat boots. I sustained body heat against the Wisconsin cold by polishing off a fifth brat washed down with a gulp of brandy. My Mohawk was painted green, my beard gold. My buddy broke my glasses and nearly cracked my nose during a celebration of a touchdown. It was a good time.

I love football. Especially the NFL. I grew up in Northeast Ohio football, nearly equidistant between Cleveland Browns territory and Pittsburgh Steelers country. Couldn’t get more steel mill than those names! I played defensive back a few years in high school, but wasn’t very good. That didn't stop me from idolizing the players I saw every week during the season. I still remember Tony Dorsett’s 99 yard touchdown run from scrimmage on Monday Night Football. My buddies and I tried to chug a Coca-Cola like Mean Joe Greene did in his famous commercial. I remember praying in front of our old TV, begging God to let that Hail Mary pass end in glorious completion.

But as I sat with my toddler son for our first game together, him replete in his tiny Aaron Rogers jersey, I reflected on the game more deeply than ever before. The racism and violence seething beneath the game was hard to overlook — especially of you watch it every week. Yet, like many fans of the NFL, I continued to do so.

When Steve Almond’s book “Against Football” came across my desk, I felt that pang of guilt just looking at the cover. And keep in mind that then, in 2014, Colin Kaepernick hadn’t kneeled in protest yet. And the latest, devastating, concussion reports were not out yet. But we all knew the ugly truth. You could hear it in interviews with the great players of football history, each starting only just beginning to reckon with the fallout of football injuries in public view.

After this interview was over Steve Almond and I were chatting about our sons and I mentioned to him that I was considering quitting football as well. He asked me a question I will never forget. He said, “will you let your son play football?” “Absolutely not,” I said. He replied, “Then why the hell are you watching it?” That was 2014, and I still no longer watch football.

Charles Monroe-Kane: Was there one event that changed your mind, that turned you against the sport you love?

Steve Almond: Well a couple of things. One, I still love football. I get tremors when I have to not watch it. So it's not like I suddenly decided "oh football is brutal and terrible and savage." It's more like I realized "oh my god, this game is really amazing and it's got a real grip on my heart, my soul, my wallet. But it's also all these other things."

Last summer I got a call from my brother telling me that something was very wrong with my mom and I had to fly out to see her. She was in intensive care —My mom had gone into a delirium in which she had almost no cognitive function. It was very abrupt and very frightening. And when I came into the hospital expecting to see my mom I did physically... but she was not there. She didn't know where she was. She didn't always recognize me. There were little painful bursts of lucidity where she knew that something was terribly wrong—she described it to me as an awful dream.

I think seeing her really sort of connected the two synapses in my brain about football.

One, that I just want to see the game. It's an amazing game. It's stirring. It's exciting. It's dramatically satisfying.

The other synapse says "hey there's something really rotten in the state of Denmark." This game is bad for people. You know the tug at your conscience. When I started to look into football more deeply it got much darker.

CMK: But you're you're a lifelong fan you're a Raider fan, right?

CMK: Well, for disclosure here, I am also a major football fan. I love football. I played football in high school. I'm a Green Bay Packer fan, tried and true. I paint my face gold and take my shirt off at below zero. I live in Wisconsin, and if you go to the north woods of the state, it is like a religion.

CMK: What is it you love about the NFL?

SA: I think football is so remarkable because there is no single game I know of that so clearly connects us to the intuitive physical pleasures of being a kid: running, jumping, leaping, tackling, throwing, catching. It's very elemental.

It isn't as regimented as baseball. There's no esoteric equipment, like in hockey. Take away everything—the uniforms and the playbook and everything— and it boils down to these very intuitive pleasures that you see on display and that we recognize intuitively.

I watched John Elway when I was a kid, I sold hot dogs at the Stanford games. And when he was in the game, you were going to see something miraculous. You were going to see his body intuitively discover, in the midst of a complete ruined play, some miraculous possibility. His body was going to make that miracle happen.

That is why we watch sports, and football does it more purely than any other sport. It is the most strategically dense sport, and also the most primal. You get brains and brawn all in the same package.

CMK: But your book is called "Against Football."

SA: I'm going to go ahead and say it's the best thing since sliced bread, but the sliced bread is not good for you. Sliced bread actually corrodes your soul.

I happen to think that football is a huge industry that's profoundly violent. And the I believe football really desensitizes us. It gives us a greater tolerance for violence. A greater tolerance racism. For militarism. And it's been commercialized in such a way that those great exalted emotions that we were just expressing and are treated as a cash register for nihilistic greed.

The sport is insane and out of control. The ultimate point in my book is we, you and me—Oakland Raiders face paint guy and you, green and yellow Mohawk guy—are the ones who give them that power. We the fans have made the football industrial complex — that's on us.

CMK: Football is violent. Hitting each other is part of the game—not just hitting but big huge muscle men Supermen doing it. Do you think that violence is a necessary evil for the NFL to exist?

SA: I think it's an evil in the NFL and I think it's probably necessary for certain fans to enjoy the game. But why not just take the violence out of the game? Why not remove that component if it's really about grace and athleticism and strategy and so forth?

The reason they don't is because of us, the fans. Again, it's on us dude. We the fans want the game to be violent as well as to be graceful, exciting, and dramatically satisfying. But part of that satisfaction comes from the fact that players are at risk and we really get off on it. The TV networks know this. They replay those injuries and those big hits. They're the ones who are holding those parabolic microphones on the sidelines so you can hear the sound of impact. They're now miking up players on their shoulder pads, or inside their uniforms, so that we can hear the bone-crunching hits.

If we really consult with our conscience and look at why we're drawn to the game we could say "I'm turning away from the game until it either tones down or eliminates the violent part of the equation." But there are enough fans who, really, that's why they turn on the game.

My book is essentially saying "okay, own it." Don't say that you don't really love the violence.

CMK: Be honest: you like the hit. His arms are outstretched, and that cornerback came in, and you liked it.

CMK: The Green Bay Packers are opening the NFL against the Seattle Seahawks this weekend (editor's note: this was 2014 season. Seahawks won, 36-16.) How many players are we going to lose to injury in that game, since Seattle is known in their secondary for injuring people.

SA: As a defensive football player, your job is to be intimidating and to null out your empathy. Your job is to be a predator. To hurt somebody. To play "lights out" football. To make them know you've been there. There are all these euphemisms that coaches and players and broadcasters and pundits use to describe the process of somebody no longer feeling concern about the moral implications of a violent act that they're about to commit. And I know that it's within the context of football, but it's still knocking somebody out.

You know when I saw when I was a kid I saw Jack Tatum on a play in a preseason game. Charles, you probably remember this. It was in 1978 and Darryl Stingley was a wide receiver for the New England Patriots, their best wide receiver, and Jack Tatum was the most feared cornerback in the league. And on a play where Darryl Stingley could not even get to the ball it was that far out of reach. Jack Tatum put a hit on him. Stingley tried to duck his head real quickly. and he fell to the ground in a heap. He was paralyzed. And it was quite clear from the way that his body had fallen on the ground if you look at it that he was in terrible shape and that something was fundamentally wrong with him.

Jack Tatum did not for one moment say, "oh my god that was a really tough hit. Are you okay fellow human?" Instead he strutted away with the other Oakland Raiders. I was an 11-year-old kid. I didn't say, "wow a human being might have just gotten seriously injured." No, I watched it as a form of entertainment.

CMK: I hate to ask you this, but I think it's important. Do you miss the Raiders?

There's another part of me that says "yeah but the game is remarkable and beautiful and I get a lot of pleasure out of it." It's not going to be easy for me to sit there and just say "okay well now I'm done with that because it's so dumb and I'm not interested in it anymore and I'm above it."