A Year Of Reckoning And Loss In The World Of Sports 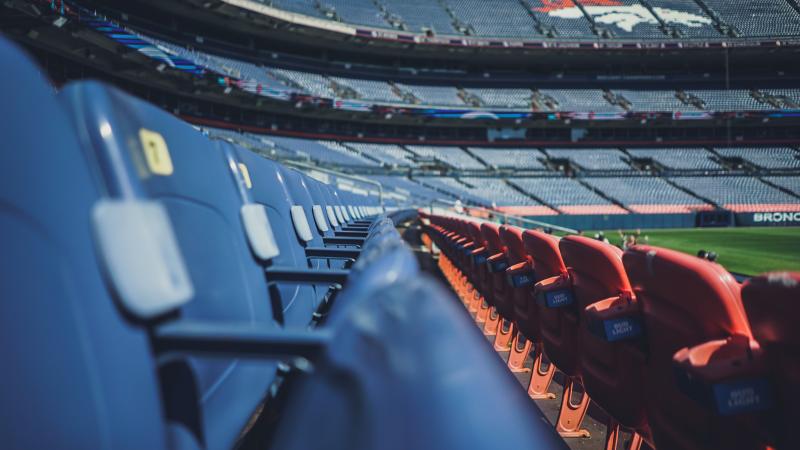 Free To Use Sounds (CC0)

Like so much else, the sports world has been rocked by this year’s turbulent events.

For months, the COVID-19 pandemic shut down virtually all sports — amateur and professional — and once games resumed, they were often played in empty arenas and stadiums.

Sports also became politically charged as debates raged over the resumption of the football season. And NBA stars, including LeBron James and Chris Paul, have become outspoken supporters of the protests over racism and police brutality.

Kurt Streeter, a columnist for The New York Times, has been following all these developments. A former nationally ranked tennis player — and the first Black captain of the University of California, Berkeley tennis team — Streeter is the first former professional athlete to write the "Sports of the Times" column.

Steve Paulson spoke with Streeter about this unprecedented year in sports.

Steve Paulson: There have been various iconic moments where sports and politics have converged. There was Jesse Owens competing in the 1936 Olympics in Nazi Germany; Jackie Robinson being the first Black player in the major leagues; Muhammad Ali refusing to serve in the Vietnam War; Billie Jean King lobbying for equal pay for women tennis players. We are now living through two historic events — the COVID-19 pandemic and the protests following George Floyd's killing. When historians write about this year in sports, what do you think they will say?

Kurt Streeter: I think they'll write about a period when there was a new reckoning where athletes finally found their footing and found their power and began speaking out in ways that have never occurred.

SP: In the NBA’s weird playoff bubble in Disney World, the Milwaukee Bucks boycotted a game in response to the protests around the shooting of Jacob Blake in Kenosha. Was that a big deal? Was that historic?

KS: I absolutely believe it was. With the Milwaukee Bucks taking a stand like they did, and then the cascading effects where the entire league then decides, 'Hey, we're not going to play. We are more than entertainers. We're human beings. We are connected to our communities. We're simply not going to take it anymore."

And then the NBA stops playing for a while. It was unclear whether they were even going to come back, but they showed their power in a way that had never been done for an entire league to stop playing.

SP: And the league supported the players. If this happened in football, I’m not at all sure the NFL would have supported its players going on strike.

KT: Yeah, the NBA and the NFL are just totally different beasts in the way that ownership, and particularly the commissioner's office, deals with players and teams. The NBA has become much more of a partnership between players and the league, and particularly the commissioner, Adam Silver. So there's a great deal of trust there. And he gets it that this league is 70 percent Black. He has to understand and have empathy for the players.

SP: Why is football so different? There was a huge debate about whether the football season should start up again because of the COVID-19 pandemic. The NFL became so politicized, from President Donald Trump on down. Why does football get so loaded politically?

KS: That is a million-dollar question.

First of all, the NFL owners have much more power than the players compared to the NBA. The NFL is the kingpin, right? It's the biggest, baddest sport and still the most popular sport in America. And there's just so much stereotyped imagery around football and machismo and really, I gotta say, white America. You know, the white quarterback, the cowboy. Literally, America's team is the Cowboys. And the players have to toe the line much more. Think about Colin Kaepernick and how Black Lives Matter was handled. I mean, they completely shut that down.

SP: Colin Kaepernick has essentially been blacklisted in the NFL. He'll probably never play again because no team wants to take the risk of signing him. I'm not sure that would happen in any other sport.

"They showed their power in a way that had never been done for an entire league to stop playing."

After George Floyd, you saw the NFL conveniently getting on the Black Lives Matter bandwagon for a while, and yet Colin Kaepernick was always excluded. They don't even mention him. Clearly, he's still most likely better than many of the quarterbacks in the NFL. And he's just been banned from the league. The league would rather that he not exist. But as far as Colin Kaepernick the activist, they're actually making him more powerful, I think. There's a power in that silence.

SP: But in the NBA, Black athletes probably have more power now than they've ever had in history. Why is it different now than it was even a few years ago?

KS: You have some really dynamic leaders.

You've got LeBron James and Chris Paul, and you've just got a whole generation of really astute star players who really get this. They're also wealthy beyond anything that their predecessors could have imagined. So they can speak up and not worry about their careers being cut short. They just feel more empowered.

SP: The other big thing that's had a huge impact on sports has been the COVID-19 lockdown. All sports — professional, amateur, youth sports — were shut down for months. Did we learn anything about sports during that time? Did you miss sports?

KS: When anything is taken away from you, you realize how much you took it for granted — the beauty and the joy that we get from sports and how much we crave it. But at the same time, I think like a lot of people, there's also a big part of me that feels guilty for this and feels like, "Man, maybe we shouldn't be doing this." I mean, we're in the middle of this terrible period right now.

SP: I wonder if the bigger loss was youth sports and all those kids who really need this outlet.

KS: I’ve been particularly interested in how that affects impoverished communities and communities of color. I recently wrote about a high school football team in north Minneapolis and their coach, Charles Adams, who has also been a police officer. As an African American police officer and what they've really gone through, after the George Floyd killing, it’s been really difficult. Coach Adams is just an amazing person who for years has brought his community together.

You know, north Minneapolis is really struggling with an uptick in violence and a sense among the kids of, where do I go? What do I do? Everything is shut down — schools, community centers. So Coach Adams’ response is, we have to have football. We’ve got to have this place where these kids can be seen, can be heard, can be watched over, can feel a sense of community, at least for a couple of hours a day. If you talk to the kids, it's like this has become a way for them to be safe.

And I live extremely cautiously during this pandemic. I'm honestly skeptical about whether we should be playing sports right now just because of the ability to spread the virus.

SP: I think we assume that virtually all athletes are chomping at the bit to play again, but I don't know if that's actually true. There could be long-term health risks if any of these people get sick. Do you have any sense of that?

KS: Certainly there have been players who've just decided that they're not going to risk it — particularly in the professional ranks. Again, athletes who have already made some money, so they can just decide to opt out. I think at the amateur level, everybody has stars in their eyes and thinks that they're going to make the NFL or the NBA, and they just feel oftentimes like they cannot take a year off.

"We’ve got to have this place where these kids can be seen, can be heard, can be watched over, can feel a sense of community, at least for a couple of hours a day."

But when I’ve talked to the experts and doctors, it’s absolutely clear that the stakes for the long-term health effects are unknown. You're seeing cases of long-term lung issues and people having cognitive issues weeks and months after they've been sick.

My worst fear is that we will find out later on that they've got long-term debilitating health conditions. I think about that quite often: "Wow, what if five years or six years from now, we look back on this period and think, 'What did we do to this generation of athletes?'"