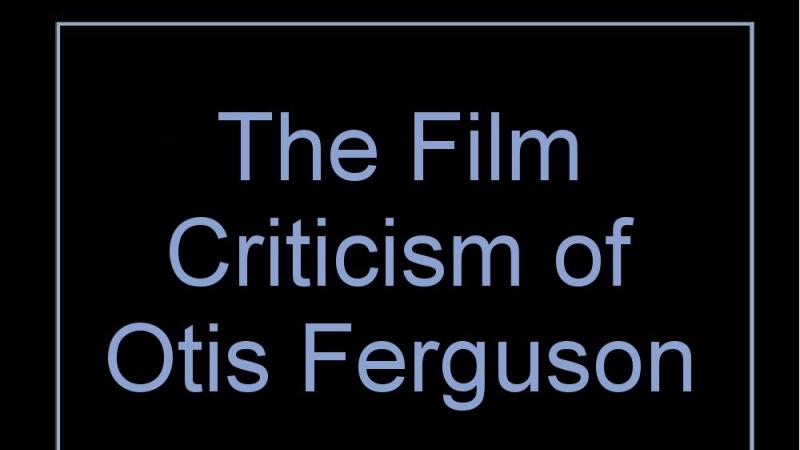 A.O. Scott is a film critic for the New York Times and author of "Better Living through Criticism." He recommends the collected writings of film critic Otis Ferguson, a pioneer of the language of film criticism and advocate for all the types of labor that go into filmmaking.

A book of criticism that I would love to recommend to everyone by one of the great early American film critics is called "The Film Criticism of Otis Ferguson." He wrote in the late 1930s and early 1940s. He wrote about jazz as well as about film, mostly for The New Republic.

He was an extraordinary critic because the movie critics who started writing in the 1930s — what we think of as the Golden Age of Hollywood — Americans had no real vocabulary for how to write about this art form, which was barely even recognized as an art form. It was silly, it was trivial. It didn't necessarily need to be taken seriously in the pages of a journal as respectable as The New Republic, but nonetheless it had a hold on the popular imagination and there was clearly a lot of talent and a lot of interest.

So the question was "how do you do this?" How do you write about movies? Do you just make fun of them? How do you take them seriously? What's going on? What are they about? Where do they come from?

One of the great things about Ferguson is that he took that last question to a level that very few critics before or since have, where he was really interested in the work that went into making movies. Not just the work of the director, and the screenwriter, and the stars, but he would write about labor conditions on the film sets. About what the producers did, about what the editors, did about what the set carpenters and painters did.

In the very early 1940s, he wrote a series of dispatches which are in this book where he went out to Hollywood from New York. It's partly just a classic kind of "fish-out-of-water" story: guy from the East Coast comes to L.A. and wow California sure is crazy. It's a wonderful piece of journalistic tourism. But he also tries to get into how this town works. What are these different guilds and unions and skilled workers doing that produces these seemingly magical motion pictures?

And the way that he wrote about is just still unmatched. I mean it evokes Hollywood very specifically at that time, in a Hollywood that has long since vanished. But it also tells us a lot about what's still there and that when we're looking at a movie, we're looking at a lot of work. A lot of work that's not necessarily visible to us, but that nonetheless is there. Reading him has made me really always appreciate that what I'm watching is, above all, the kind of almost miraculous product of human labor. And he wrote about this with wonderful sensitivity and wit and panache.

When Pearl Harbor was attacked, he enlisted and was killed tragically in a German torpedo attack in 1942.

So anyone who is interested in movies, in criticism, in just wonderful American writing should seek out "The Film Criticism of Otis Ferguson."