The Contemplative Silence Of A Cold, Lonely Journey 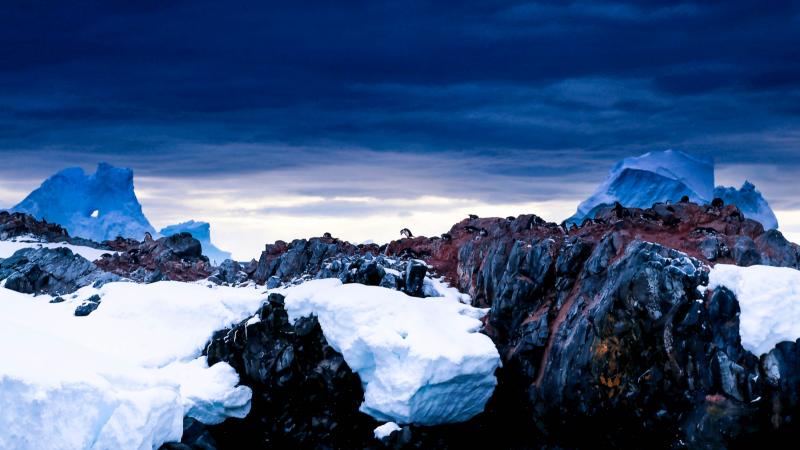 In 1993, Norwegian explorer Erling Kagge made history by becoming the first person to cross Antarctica alone. He was by himself for fifty days and during his trek, he learned a lot about the power of silence and the importance of making time for it in our noisy, hectic lives. In this edited conversation, Steve Paulson talks with Kagge about what silence means to him.

Steve Paulson: Erling, how do you define silence?

EK: Yeah, absolutely. And I think, you know, this silence, of course, it's nice to be surrounded by silence. But somehow, you can't wait for silence to appear, so sometimes — especially in the cities — you need to create your own silence. You need to search for the silence within, the silence which is there all the time. Your silence will be different from my silence and the silence I had yesterday is different from one today because in this silence, you meet yourself.

SP: Now you have gone to extreme measures to experience this kind of silence. You are the only person in history who has traveled to both the North and the South Poles and climbed Mount Everest on foot without any help and without any radio contact. How did those experiences shape your understanding and your appreciation of silence?

EK: You know I think, in particular, although I was the first to do this, but people have done it afterwards. But, in particular, for me to walk to the South Pole totally by myself 50 days and nights under the midnight sun changed my attitude towards silence because I experienced how enriching silence could be and how important it is.

People talking about silence today, it’s not a trend, not a fad. This is something deeply human we have needed for thousands of years, something we need this year and in the years to come. I mean, to walk there by yourself, no radio contact, you start to see that sometimes your brain can be wider than the sky.

SP: Let's just pause for a moment and put this in context. I mean, you walked for 50 days alone in the Antarctic. That is just mind-boggling. I can't even imagine, you know, having that much time alone. Not to mention the danger involved.

EK: But, you know, when they hear about it on the radio, it sounds a bit crazy and mind-boggling. But actually doing it, it's not that crazy in the sense that all you need to do is to put one leg in front of the other enough times and you get to the South Pole.

EK: Even a mouse, even an elephant can take small portions.

SP: But you're pulling a sled during all of this, right?

EK: I had a sled with everything I needed for the whole trek. And because nobody had done this before, I was uncertain how many days I was going to spend. So I had food for 66 days and then fuel for seventy days, my sled. And I was eating about one kilo every day. So I started out at 120 kilos, which is probably two hundred sixty pounds, and I got to two pounds lighter every day.

SP: So you were a lot lighter by the end of the trip?

EK: Yeah, the sled was lighter and I was lighter because, of course, you burn off, you know, much more calories than actually put in.

SP: Now that is also just a lot of time alone with your own thoughts. And a lot of people just wouldn't be able to handle that much time in their own head.

EK: Yeah but, you know, I think that's only partly correct, in the sense that if you actually are in that situation, I think humans’ talent for actually adapting to the circumstances they’re in is huge. So I think most people would appreciate actually being by themselves, maybe not for 50 days and nights in the Antarctica but, you know, for slightly more than they are normally. In general, I think, people would be better off if they had a bit more silence in their daily lives.