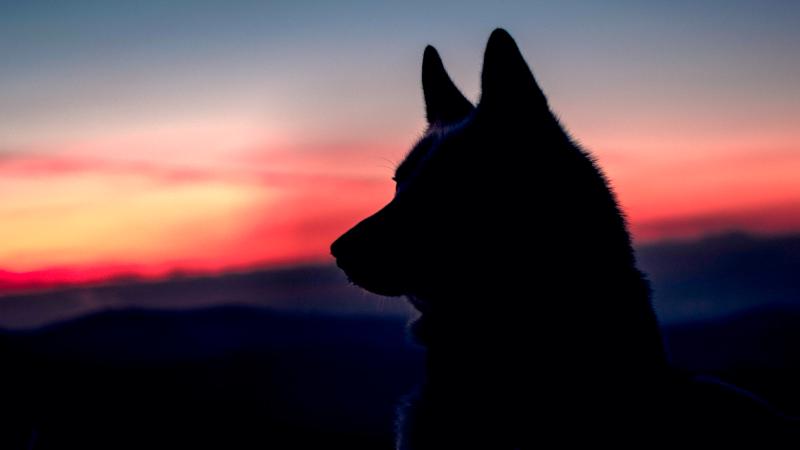 When he was a boy, horror author Stephen Graham Jones came up with a plan to become a werewolf.

"I found these books that told me all the different ways you can become a werewolf," said Jones, speaking to me for "To the Best of Our Knowledge. "Supposedly, if you drink water collected in the paw print of a werewolf, you could become a werewolf."

The transformation seemed simple enough. Jones hosed down his grandmother's dirt driveway to prime it for werewolf tracks, then woke up the next morning and found a huge canine print pressed in the mud. He dutifully drank the water from the paw print and awaited the surging power of his transformation.

Unfortunately, he did not become a werewolf back then. But he hasn't given up hope.

"Who knows, maybe it's a delayed reaction," Jones said. "Maybe it's still going to kick in!"

While passing the time before his next life as an actual werewolf, Jones redefined the genre with his 2016 novel "Mongrels," which follows a family of werewolves on the run in a hostile American landscape — a story drawn from his childhood. Jones is a member of the Blackfeet Nation. He grew up in West Texas, changing schools and skipping towns from year to year.

Jones shares what attracts him to monsters, what they can tell us about our own nature, and why he's interested in how a werewolf might go about getting approved for a car loan.

Stephen Graham Jones: Horror always needs some element of the monstrous. And you've got to have something that's shaking up the world, that's disrupting the status quo, that's erupting into so-called safe spaces. And monsters are the best at that.

Anne Strainchamps: You've written so famously about werewolves in your book "Mongrels." It kind of did for werewolves what Anne Rice did for vampires in the sense that you made them real. So out of all of the monsters that you could have picked, why the werewolf?

SGJ: I think it's because I grew up where I grew up, in West Texas. When you're 12 years old, you can sense that your body is turning into something. You have no idea what that might be, really. People tell you, and you read books, but that doesn't really help. So what I did was imagine what I wanted to turn into. And so when you look at the array of monsters or the other shapes that you're able to occupy, being a werewolf was actually within the realm of possibility.

If werewolves were a real thing, then I could be a werewolf in West Texas. And I think that's why I identified with the werewolf and became forever fascinated with them.

AS: You did something really different with your werewolves in "Mongrels." You kind of turned them completely around.

SGJ: I wanted to believe in werewolves. And you know, I've read Alan Moore and Dave Gibbons "Watchmen" so many times. The question they ask in that comic book is, "What if superheroes were real?" So I asked myself, "What if werewolves were real?"

I thought that the werewolf would not be having grand fights up on the parapets of castles for ancient daggers and stuff like that. I thought werewolves would be having a lot of trouble passing the credit check down at the car lot. That's how it seems werewolves would function in the modern world. And so (those are) the werewolves that I had to put on the page. And in order to believe in them, I had to make them as biologically real as I could. And also culturally real.

AS: It also seems to me like that those part-animal, part-human archetypes also say something about our fundamental uncertainty about what makes us human. How are we not animal? But it's also when we make those stories monstrous, it seems like what we're saying is that anything animal in us is other and bad and wrong.

SGJ: There is definitely some of that. I think werewolf stories or half-human, half-animal stories are reminders to us that we have animal appetites that we shouldn't tamp down. We need to let them out into the moonlight to run once a month for two nights or something. If we insist on denying our animal side, then the animal side is going to express itself in some way that's probably going to be worse.

But yes, if you give in to the animal appetites, if you don't apply intellect and social norms and everything, then you can turn into a monster and go out of control.

AS: I'm starting to have some sympathy for the monsters here. What happens when we realize the monster is us? Look at climate change. We're the ones poisoning the Earth and ruining life for everything.

SGJ: You're totally right. When you go back to, say, the trial of Peter Stumpp — this is in the 16th century, I think — he's the first person documented to have been tortured and executed for being a werewolf. Of course, he wasn't a werewolf. He was someone living on lands that had been ravaged by warring kingdoms. And so there was no livestock, no grain. They had to eat something, so he took to the travelers and started gnawing on them.

And when he got busted for that, he said, "It's not my fault. I'm a werewolf." Which is to say the werewolf mask is something that people put on to hide the evil that's actually inside them. And the werewolf kind of becomes the scapegoat — the monsters became the scapegoat. 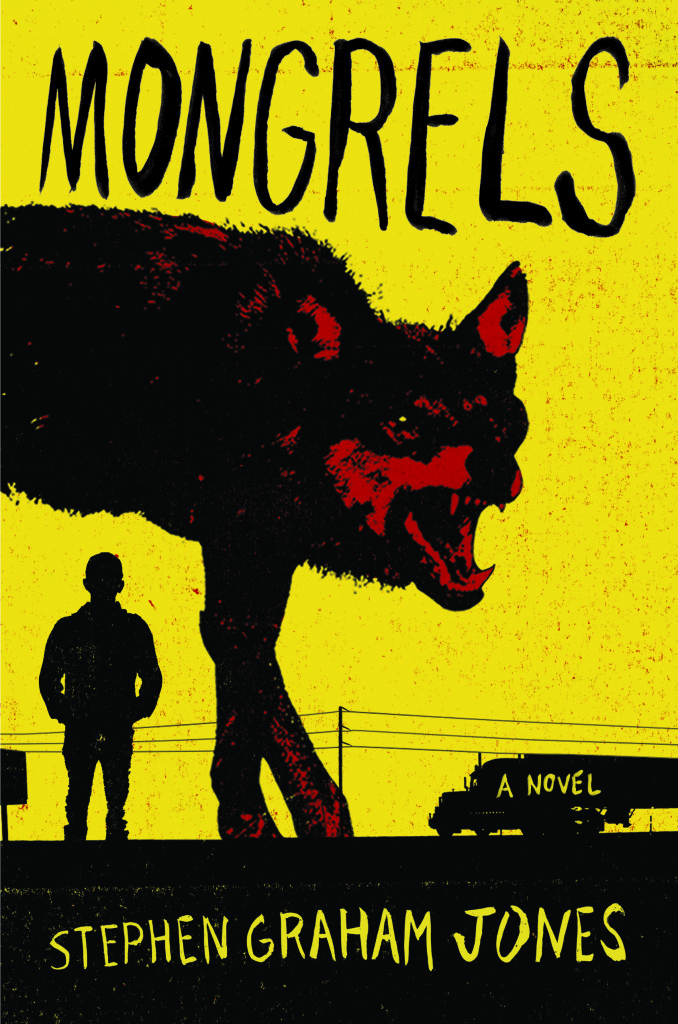 "Mongrels" Via the author

AS: How does being a Native writer fit into working with werewolf stories? Because there's this long, objectionable, colonialist association of American Indians with wolves.

SGJ: We get associated like that because America specifically, but I think the world at large (as well), prefers to think of Natives as stewards of the forest. You know, we cry when there's a Dr. Pepper can in the creek, that kind of stuff. And that's well and fine, except for that also means that we're pretty much elves. Elves are also stewards of the forest, and if we're going to be elves, then we're fantasy creatures. We don't exist, we're nobody that you have to take seriously, we're nobody there's any legal obligation to or anything like that.

Any truck stop that you go to in America, you pull up and you see that van up by the road with blankets up on racks that you can buy. Those blankets generally have a painting of some Indian chief, with half his face being a wolf, because we're merged together.

It's been a slow process in America for Native people to be allowed to be human. And I do think that that's the next step — that we've gone from wolves to elves, and hopefully the elves can have their ears dulled down and we can become people.

AS: And then the elves can, like everybody else, have mortgages and kids in public schools.

SGJ: They can be trying to pass their credit check down at the car lot.

AS: Yeah. So as long as we're talking about monsters... In a more recent book of yours, "The Only Good Indians," there is another creature: Elk Head Woman.

SGJ: She is the manifestation of a hunt that went bad 10 years ago. These four guys snuck into a place on the reservation they weren't supposed to be, shot a lot of elk they didn't have access to. What that rupture triggered was a spirit of vengeance to rise, and a spirit of vengeance does have a human body and an elk head — a cow elk, specifically.

AS: Where did she come from? There are myths, I think, in different tribes, of deer head women, right?

SGJ: Yes, there is Deer Woman, for sure. The Blackfeet don't have any stories like that, as far as I know anyways. (But when) I got back from the first Indigenous Comic-Con, I'd come back with Elizabeth LaPensée's comic book "Deer Woman: A Vignette." And on the cover is basically an Elk Head Woman. And so when I needed a monster, she was right there, waiting.

Elk are just really, really canny. I respect them so much. To me, they're the hardest big game in America to hunt.

AS: We started by talking about the horror genre — you're out there as predator, killing, shedding blood, ripping entrails. That seems fairly monstrous.

SGJ: That is. And that's exactly what happens in "The Only Good Indians."

These guys, they don't just get the meat that they might need. They kind of go into a frenzy, and they are just shooting everything that's moving in their scope. You hear about wolves sometimes wandering into a herd of sheep and just killing left and right, just killing to kill. This could just be stories ranchers tell to rationalize their own shooting of wolves, but whether true or not, it's a story that sticks. 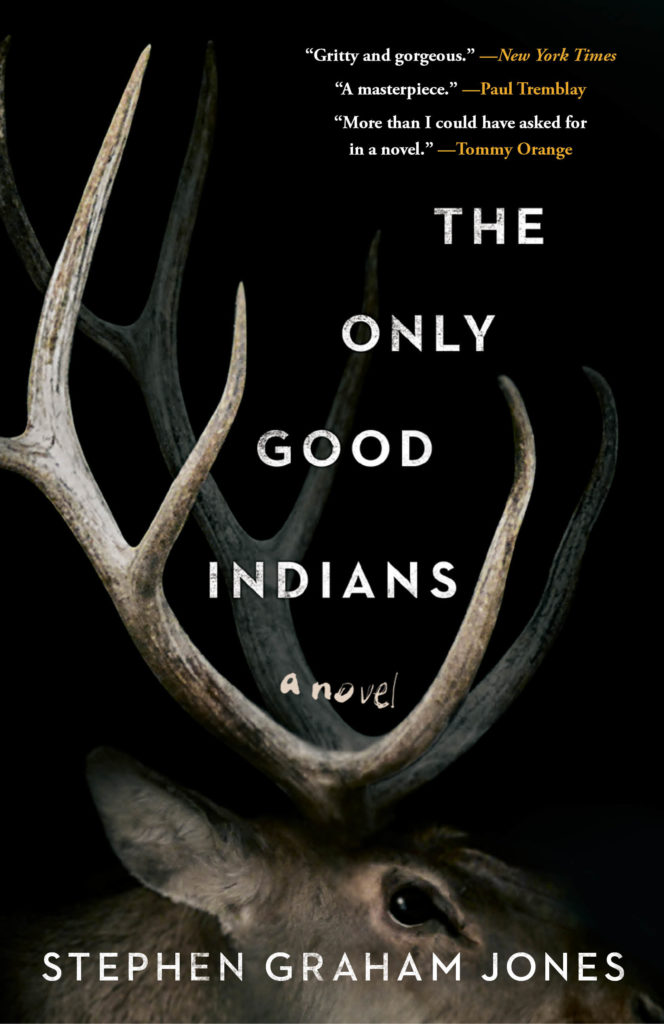 "The Only Good Indians" Via the author

We associate that kind of behavior with wolves specifically, and I think that's probably why the werewolf monster has persisted as long as it has, because it feels right to us. It matches up with what we instinctively believe about wolves, that they are just killing machines.

SGJ: On the savannah for millions of years, when we were evolving into what we are now, we were basically bags of meat. We didn't have sharp claws anymore, our teeth got flat. We couldn't have a good camouflage. We weren't especially fast. All the things that would help us avoid predators were traded in so we could think. Our calories would go to our brains, basically.

And the result of that was that we always had to be vigilant. Every second of the day. We had to be watching the strand of grass, watching those trees, watching the sky, because everything wanted to make a meal of us. That got hardwired in, this fear of monsters, of teeth in the darkness or in the sunlight.

In today's modern world, we shine light into all the dark corners. We sterilize all the surfaces. And what that's done is erase monsters, I feel like. What horror can do is let us feel human again by having us confront monsters. To me, you're most human when you feel fear, when you feel that fear of being eaten by something else.

AS: You're sort of suggesting that we're drawn to the stories about monsters because we want to stay embodied. We live in an increasingly sterile, silicon world. So we need werewolves to remind us that we're human, and that means animal.

SGJ: Yeah, we're not just intellect. I think the impulse through the generations, through the eras, has been towards winnowing humanity down to just thinkers. We just think and feel, but we also bite, you know. And I think monster stories, and specifically werewolf stories, remind us that we need to bite.