How A Carousel in Wisconsin Inspired 'American Gods' 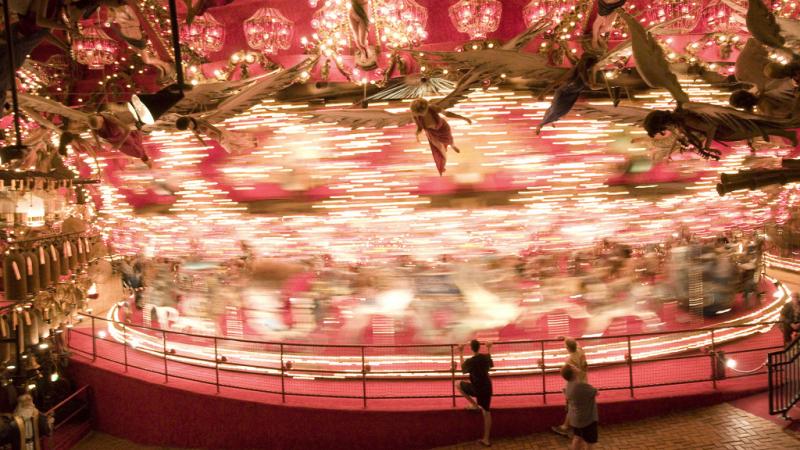 Sixteen years after the novel’s publication, Neil Gaiman’s classic "American Gods" debuted on Starz on Sunday, and critics were quick to point to the show’s faithfully weird aesthetic.

But if you're familiar with Gaiman and "American Gods," you figure things are only going to get weirder from here, as the reality of the series peels away to reveal a distinct blend of Americana and high fantasy.

The novel, first published in 2001, revolves around gods living on earth, who in Gaiman's telling draw their power from people's beliefs in them. As immigrants came to America, they brought their gods with them, but those gods faced diminished power and prominence as religiosity waned over time.

New gods rose to take their place, each reflecting American obsession with more familiar aspects of modern culture, including celebrity and drug use. The book went on to win Hugo and Nebula awards, and quickly became a cult favorite that made Gaiman an icon among fantasy enthusiasts.

There have been attempts to bring the book to the screen before, but the first successful attempt debuted on Starz in 2017, first airing this past Sunday.

In 2010, Steve Paulson spoke with Gaiman about where Gaiman's magical thinking comes from. The interview that took place at one of the locations that directly inspired "American Gods" — the House on the Rock in Spring Green, which Gaiman has hinted will make an appearance in the TV series as well.

This transcript has been edited for space and clarity. The original interview can be found here.

Steve Paulson: Why does the House on the Rock figure so prominently in "American Gods?"

Neil Gaiman: I think one of the things that's so brilliant about the House on the Rock is that it creeps up on you gradually. The transition between somewhere that's kind of weird and "I'm not even sure I'm on planet earth anymore" is this carousel, everything on it is like a child's fever dream nightmare.

Paulson: The image of much of America, especially the Midwest, is we don't really have the kind of history that an Englishman has back home. We don't have those sacred places. But here you found something sacred, apparently at House on the Rock in Wisconsin.

Gaiman: I was trying to make sense for myself of the differences between the old world and the new. I was trying to understand why it was that, for example, when the "Jack" (folklore) came to the Appalachians (from England), they're unchanged from 400 years earlier — except that they have no magic in them. The Jack stories as told in England were filled with wizards, giants, shape-changing and magic and all of this stuff.

The stories told in the Appalachians are as if somebody has listened to the classic stories and said, "That's a really good story. But that stuff about the Giant, that doesn’t exist. We'll take that out."

They're wonderful, they're tricky, they're intelligent, and they are completely devoid of magic. And I wanted to try and figure out a fictional context for talking about this.

Paulson: So part of your project was to find or maybe even create the magic in America, in Wisconsin of all places?

Gaiman: I love Wisconsin, I love America, and I love the middle bits of America, the goofy bits. And in some ways it was for me this glorious excuse to drive around the state.

My research (consisted of) road trips where I didn't go on interstate highways. Occasionally, it was haunting. It was always educational.

Sometimes it was very sad. Up in the north woods, I'd find myself driving through ghost towns. You'd be driving through something that felt like a lovely little town, and then you'd realize every store was closed, and nobody was living in these houses. And the big sign on the marquee of the local movie theater said "Congratulations Bill and Edie on your 85th wedding anniversary, 1991," and that's the last thing that anybody ever put up there.

But all of that stuff wound up feeding into trying to write a book about this area of America: the madness of the winters and the magic of the place.

Paulson: Another thing that's so striking about so many of your books — whether it's "American Gods" or "Neverwhere" or "Coraline" — is that there is another dimension of reality just beyond the wall or just down the sewer grate, as if we're living in the surface reality, and there's something else beyond. Is that the way your mind works?

Gaiman: It's definitely the way my mind works. But having said that, when I sit down I read articles in New Scientist on the nature of reality, it seems to be what they're saying too.

Reality is so incredibly fragile. Most of it's an iceberg and we don't understand it at all. I'm very happy with that. I think a world in which we do understand everything would be an incredibly sad sort of place.

Paulson: Do you worry that our modern culture is losing its sense of magic?

Gaiman: No, I don't, because I think you find magic is everywhere. Magic is a way of seeing the world. You just have to look at things properly.

It's not even the sense of magic. I think it's much more of a sense of wonder, a sense of infinite potential. And for me that taps absolutely and 100 percent into the imagination, which is the root of everything. Everything you see. Any building, any microphone, any chair — somebody imagined it before it could exist.