A Little Grammy, A Little Bubbe: A Writer Embodies Family History Through Food 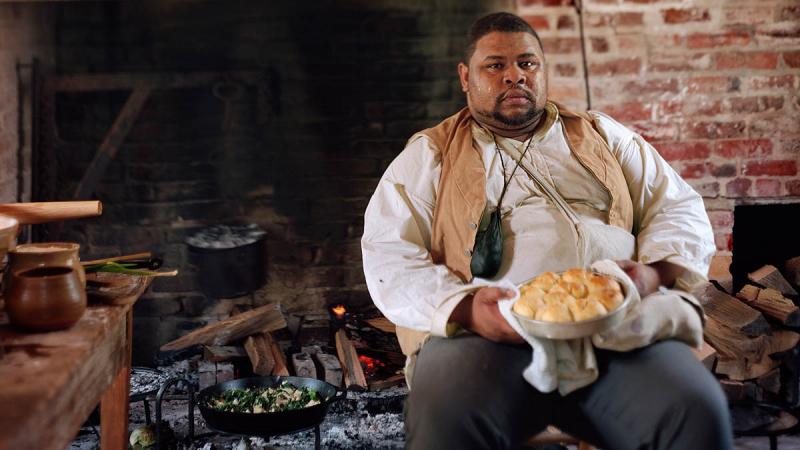 Michael Twitty practices “identity cooking,” drawing from his African American family history, his Southern heritage, his Jewish faith and the gay community. Twitty has traced his family’s food history back to slave cabins and antebellum kitchens of the south, both searching for his past and sometimes re-creating meals and dressing in in period costumes. He uses his exploration into food as a way to learn more about his ancestors and in turn bring their stories into the present.

Twitty’s book “The Cooking Gene” won the 2018 James Beard Award for best book of the year, in addition to best writing of the year. To the Best of Our Knowledge producer Shannon Henry Kleiber talked with Twitty about "kosher soul," what kind of cooking gives him the most joy to share, and how food connects him to larger history and culture.

Shannon Henry Kleiber: I love the phrase identity cooking. How have you found your identity in African American, Jewish, gay culture, through food?

Michael Twitty: I think it's impossible not to. We called my grandmother Grammy, so I'm a little Grammy. I'm a little Bubbe. I'm a little queen mother of the house. I'm all of those pieces. It’s what you bring to the food additionally.

Blacks, gays, and Jews have a history of overcoming oppression and you overcome oppression through the humor the most. The satire that goes into the food. The joke is inherent. The will to survive is right there in the food, the celebratory aspect. We're very over the top people.

SHK: Give me an example of the joke being in the food.

MT: Well sometimes the joke being in the food for the gay part is a little testy for family audiences. I think sometimes when I make kosher soul food. If you're Jewish if you're black or African diaspora oriented, you get it. Black-eyed Pea Hummus is a little bit of a joke as well as a delicious food.

Or, matzo meal fried chicken, or you know sometimes I make matzo balls in peanut soup which is kind of like the dumplings or the fufu that you make in West Africa.

Or you know I'll make things purposely with looking like glitter or disco balls. I mean it's an homage to gay nightlife culture. And so for me all those pieces come together. Whenever I walk into a kitchen I realize I'm going in there with incredible armor, because if all three groups are doing something it must be genius.

SHK: But some of it is painful too. In your book you write about the "whistling walk," where when slaves brought food into a room, they had to whistle to show they weren't eating it before. How did the history of slavery play into your research and thinking about how you present food to our modern culture?

SHK: Tell me about rice. What's your underlying thought when you're cooking rice?

MT: I think the cultural stereotype is that rice belongs strictly to Asia. No, rice belongs to Africa and Asia. It was independently was developed in Africa almost 4000 years ago. Rice is a huge part of the African-American story. It was brought to the American South as an extremely lucrative crop and then became part of the diet of every single person living in the Deep South in one form or the other.

When we cook rice at home, we make proper rice. When I say proper rice, Vertamae Grosvenor, a blessed memory, may she rest in power, would have said we want every grain to be distinct and separate — we don't like our rice mushy. You rinse the rice, you grit the starch off, you put it in the pot, you set it to boil. The craters start to form, you put the towel or the foil over top and then you put the lid on top and you take it off the fire. And then you wait 40 minutes after letting it cook for about 15.

SHK: Is there a place for culinary appropriation? Who should represent what in the food world and who's in charge of saying “this is my food?”

MT: I certainly do believe that there is room for some level of food ownership and there's also room for sharing. I think people confuse cultural appropriation with cultural diffusion. I've made the distinction that cultural diffusion is what happens in a multicultural society that's healthy. There's something else to bring to the table. Whereas, in unhealthy multicultural societies, one group that has the upper hand can take it and extract elements of another culture, repackage it, resell it at a higher bidding price. That often happens with black culture in America. This happened with music, it's happening with fashion, happening with hairstyles and it's happening with food.

We need to have a sense of culinary justice, which is all about making sure that those of us who come from communities that have been oppressed can make a living. That we can have a name, can exert our authority and cultural ownership over what we come from and what we have.

SHK: So what do you do to change that? Do you encourage people to delve into their own culinary histories?

MT: Oh absolutely. We've already had our first culinary tour of West Africa — we went to Ghana. We're going to Benin and Togo next year. It's all about taking African-American chefs and culinarians to West Africa — especially those who've never been — and having them experience the food culture of their motherlands.

It's also important for African-American cooks and chefs to go to urban rural centers where black food developed — not just the New Orleans and Charlestons, and not just the plantation, either — to sort of reclaim those roots.

You can get a recipe anytime you want, but can you get the cultural context and meaning behind that recipe? Can you really feel it, can you really understand it, appreciate it from the perspective of someone who was born into it?

MT: Absolutely. You may not know the name of every ancestor but if you can reasonably assume or guess that you're eating something they ate, there is something visceral about that. There's a reason why for us Jews, Passover is celebrated by 99 percent in some form of the Diaspora Jewish population. It's either a Seder, or it's eating the matzah, or it's doing something. Why? Because it's about not breaking a 3000-plus-year-old chain. If you can feel the same experience eating that matzah, the recipe has not changed in three millennia. So just having that same experience is overwhelming.

SHK: How do you keep making it about life and love and learning and not about kind of the corporate way of feeding our families?

MT: I think that every time I get to cook like somebody’s grandma, that’s the best. That’s how that love and hope and energy comes through. And then you remember their name, and where you learned it, and then it's like okay, everybody's narrative starts to bleed with everybody else's narrative. It's very empowering and makes you feel more human, more American, a part of something bigger than yourself in your own little bubble.