Anyone Can Cook—With the Right Elements 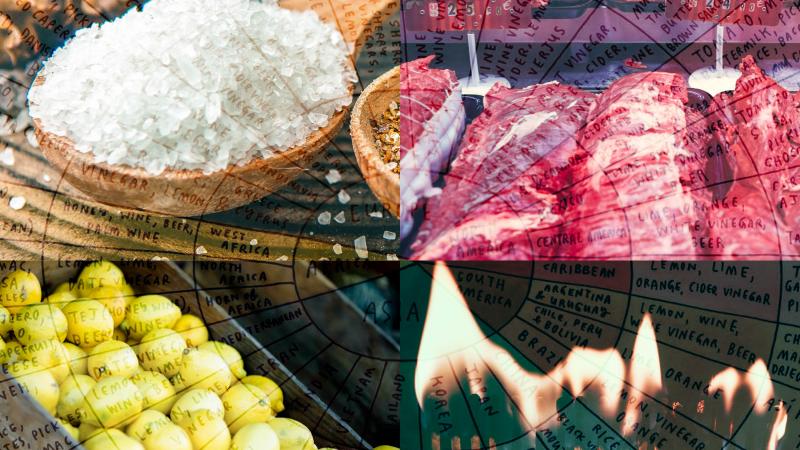 Chef Samin Nosrat likes to deeply connect with the food she eats — but that doesn't mean she's completely reverent to tradition. Her loyalties are to her taste buds.

"I had this pretty incredible meal when I was 19 years old at the Chez Panisse restaurant in Berkeley," said Nosrat, speaking to Haleema Shah for "To the Best of Our Knowledge." The $220 French meal was a delight of frisée aux lardons, guinea hen, wild mushrooms and green beans, capped off with an intimidating chocolate souffle.

Nosrat had never encountered souffle before, so when the server offered to show her the proper way to eat it, she listened attentively.

First, she was to poke a hole in the center with her spoon, then lightly pour a raspberry sauce into the resulting chasm. Nosrat followed these instructions and took a bite as the server eagerly looked on, asking what she thought.

"Oh, it's really good. But you know what would make it even better? I would love a glass of cold milk."

In a fancy French restaurant, you don't order milk.

Instead, the server brought Nosrat and her companion a bottle of dessert wine for an advanced lesson in refined dinner pairings, but she demurred to the request. Nosrat took her souffle with milk.

Nosrat said it meant a lot to be able to discover the flavor pairings herself — with a side of tradition.

"I just had no idea how rude it was and presumptuous to tell somebody in a restaurant how to make their food even better," said Nosrat. "It was really super sweet and just what I consider to be the beginning of my culinary education."

4 Flavors On The Compass

Growing up, Nosrat learned about following flavor from her mother, who would drag her and her siblings all across southern California searching for the ingredients that "tasted like Iran," the pinnacle of flavor to her mother's taste buds. Those distinct flavors — lamb that "tasted the lamb-iest" or the feta cheese that was "the saltiest and tangiest" — were especially important in the Persian meals Nosrat grew up eating, since there's a strong emphasis on each plate containing contrasts.

This balancing of flavors, done by taste and by feel, was absorbed by Nosrat early on, and lingered in her mind as she trained to become a chef. Recipes from conventional cookbooks felt stilted, and she never quite got the right results cooking by numbers.

"That wasn't reflected at all in what I saw at work, which was constant tasting, constant tinkering and constant adjusting," said Nosrat. "(We never) made things in the same way. Every single day, we were just using taste and our senses to guide us."

"Early in my cooking career I understood that these four elements — salt, fat, acid and heat — were guiding us in the kitchen like points on a compass."

That realization lead her to write a different kind of cookbook — "Salt, Fat, Acid, Heat" — which won a James Beard Award in 2018. It's now the basis of a Netflix series by the same name, where Nosrat revels in the titular flavors as she tours the foods of Japan, Italy, Mexico and in her home in California.

Each of the four elements has its role to play in not just the type of dish you're making, but also the feelings and the culture it evokes.

Salt plays a pivotal role as a flavor booster.

"If there's one thing that everybody needs to learn how to use in the kitchen, it's salt," said Nosrat. "If you get the salt right, not just how much but when and how and in what form to add it — you can just get your food really, really, really close to being perfect."

Fat affects the texture of food — creaminess and crispiness and flakiness — and gives it a sense of place.

"Especially choosing which fat we cook in will set a dish on a trajectory culturally — if you start with ghee, your food will taste like it comes from India or Pakistan because that's the fat they use there."

Acid adds balance and complexity to a dish.

"Acid provides contrast — sometimes in just the tiniest form, it's just creating a little bit of a secret second layer in the taste," she said.

Nosrat points to lemon juice and vinegar, or the tang of cheese or yogurt. Even light notes of sweetness can bring an acidic flavor to a dish.

"Chocolate is acidic — as are coffee and tea. Even honey and even sugar," Nosrat said.

And potentially the most ignored element, heat. The heat level and time taken to cook something can drastically change depending on the other elements at play.

"A lot of tender foods require high heat applied very quickly to preserve their tenderness," said Nosrat. "And a lot of dry, tough foods require water and low gentle heat to become something tender and delicious, something that falls apart."

Nosrat says these four elements stood out as the sort of universal building blocks for every food she experienced.

"Different cuisines maybe have different tastes — Thai food has a lot of sweet and spicy and sour things, and Japanese food has a lot of umami and salt and sourness also, and sweetness — but salt and fat and acid are basically just things that as humans, we've evolved to want in our food."

Food contains a lot of history, a lot of tradition — as Nosrat experienced in her first encounter with souffle. But if we're all just following the same flavors, what are we to make of tradition, of "authentic" experiences of food, the way it was meant to be cooked and consumed?

Nosrat says the idea of authenticity in food is "overrated." For example, she says, consider what food writer Soleil Ho has called "assimiliation food," recipes immigrants cook in America using the ingredients they have available. "(You see) all of these weird mash-up dishes," said Nosrat.

Or for that matter, in her own cooking. "(The food that) I call Iranian and I feed to my friends in Berkeley — I know that if my mother or grandmother saw that, they would be like 'This isn't an Iranian food!' So does that mean that it's not authentic? Does the stuff that my mom had to cook for us in San Diego using Californian ingredients, is that not authentic?"

"To me, (my mom's cooking in Berkeley) was the most delicious and authentic stuff. And a lot of times, when I went back to Iran and ate the stuff there, I was like 'mmm, my mom's is better.'"