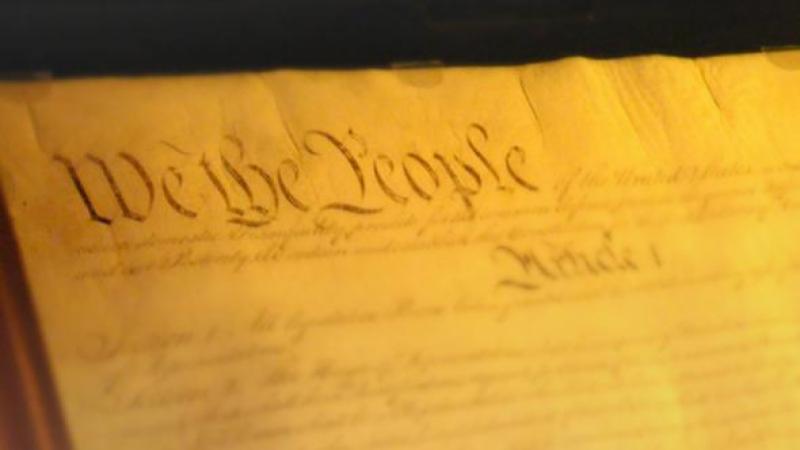 "It nauseated me," Anderson said. "Franklin was a big hero of mine when I was growing up. No one ever told me he held people in slavery for his entire adult life. We think 'Oh, he’s a good guy,' but we have primary source evidence that he held at least nine slaves. It horrified me."

Anderson, who was just beginning a career as a celebrated young adult novelist, wound up writing "Seeds of America," a series of deeply-researched historical novels reframing key events of the American Revolution through the eyes of three young slaves.

The first novel in the series, "Chains," which was a National Book Award finalist, introduces 13-year-old Isabel sold with her 5-year-old sister, Ruth, to a cruel family of wealthy Loyalists in Manhattan. When her Tory master’s friends plot to assassinate George Washington – an actual historical event – Isabel risks her life to bring proof of the plot to a rebel camp, only to discover both Patriots and Loyalists support slavery.

"Can you imagine what it must have been like to be enslaved at a time when everyone is talking about this dream of freedom and equality, but they’re not talking about you or people who look like you?" Anderson said. "That question has driven me for 20 years."

"Forge," the second novel in the series, follows Isabel’s friend Curzon as he escapes from slavery during the winter of 1777 and joins the ragged rebel army in Valley Forge. Anderson has just come out with "Ashes," the long-awaited final volume.

Speaking with Anne Strainchamps, Anderson discussed slavery, the Revolutionary War and the long history of discrepancy between America’s democratic ideals and its practices. Their conversation below has been edited for length and clarity.

How common was slavery in New England around the time of the American Revolution?

In 1776, twenty percent of the population of New York City and Philadelphia was held in slavery. That’s one in five people. You had slaves in Boston, Albany, Vermont, New Hampshire, and what we now call Maine. When you really peel back the layers, and look at the history, I don't think you have any choice except to stand in sorrow and in shock.

Were there differences in the way the Tories versus Patriots treated slaves?

It changed over the eight years of the war. Originally the British, very early in the war, offered freedom to any slaves who could run and join them – first to men of soldiering age and then to all slaves. They didn't do that to be nice. They wanted to disrupt the Patriot economy.

But when Isabel tries to join them, she's given back, because she is considered property by a Loyalist family, and the British didn't want to upset their Loyalist friends. The Patriots of course had no interest in freeing anyone. But what the Patriots did have was a cohort of African-American men – some free, some still held in slavery, others who liberated themselves – who heard that call of freedom and signed up. George Washington didn't want them at first, but by 1777 he was accepting black men and boys into his army.

How many African-Americans fought in the Revolutionary War?

By the time the Patriots marched out of Valley Forge, about 10 percent were men of color. By the time they got to Yorktown, I've seen estimates as high as 20 percent. And remember, this was an integrated army. These were black and white soldiers fighting together for the cause. It was the last time the U.S. Army was integrated until the Korean War in the 1950s.

You are descended from many soldiers who fought in the Revolutionary War on both the Patriot and Loyalist sides. In thinking about slavery, do you feel implicated in any way, knowing you had relatives back then?

I think it's more important as a white person in America to recognize the privilege that I'm living with every day. I can't be responsible for the things done by people who lived before me, but I can and do take responsibility for what our country looks like today.

Understanding, for example, that I didn't have to teach my teenage son not to walk down the street with his hood up and his hands in his pockets. Coming to terms with that is where my responsibility lies, and figuring out how to talk about it with friends, how to help people open up their eyes and hearts a little more. That’s way more important than whatever I feel about my ancestors.

You've just come out with "Ashes," the third and final book in this trilogy. Your fans have waited eight years for this one. What happens in it?

The end of the war, especially as fought in the South, was particularly ugly and bitter. People who were held in bondage, however, were able to take advantage of that chaos. One of the historians who vetted my manuscript has speculated that there's a pretty good chance that more enslaved families were able to liberate themselves because of the chaos of the American Revolution than were able to free themselves through the Underground Railroad before the Civil War. So Isabel and Curzon and Ruth are caught up in that.

But it was a very frightening time for anybody of color, even soldiers who could prove they were free, because slave owners in Virginia were so desperate to replace their workforce that they were grabbing people. (It) didn't matter what their legal status was, if they looked a slave, then they could be enslaved – even though they were trying to fight for the freedom of their country.

Do you think the way issues of slavery and freedom were dealt with – or not dealt with – during this period set the nation up for the Civil War roughly a century later?

Oh, completely. There was an opportunity when they were framing the Constitution to outlaw slavery throughout the entire nation.

As I understand it, the states of South Carolina and Georgia, whose economies were so dependent on enslaved labor, said, "If you pass this, we'll leave the confederation of American states and rejoin Great Britain." So in order to preserve what was the fragile United States, our leaders – whom we love to admire – could not find the courage of their convictions and make all Americans free.

How does knowing this history affect the way you think about racism in America today?

It's fascinating to discuss this with friends who are white and to feel their resistance. Not because they're bad people – they’re often politically liberal, open-hearted people – but they don't know their history. They don't know how we got to where we are today.

If they would let me teach a history course, I would start it with the protests after the death of Michael Brown in Ferguson, Missouri, and I'd teach history backwards to show you how the institutional racial injustices of today and the lack of understanding of the inequalities in America today are directly tied not only to the founding of the United States, but to the fact that we haven't had the courage to be honest about that founding.

I'm a very patriotic American, and I don't want to live in a country where the Declaration of Independence is written for a certain kind of person. It was written for all of us. Those powerful words are what bring people here from all over the globe, to help make what I believe is the most fascinating, diverse, strongest country ever. But we're not going to get there until we understand our history. Once we do that, we can look at the present with open eyes and begin planning for a true United States in the future.