Singing The Song of a City 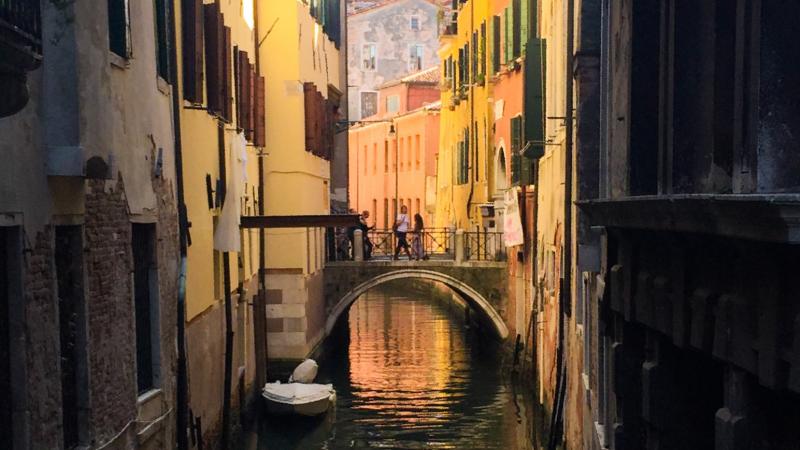 It would be easy to overlook her — the small, slight woman hovering unobtrusively outside construction sites, drifting quietly through busy city streets. You might spot her near a Hong Kong marketplace or a Venetian canal, in Brooklyn or Bengaluru. Wherever it is, go closer. Listen. Vivienne Corringham is singing the city.

British-born and New York-based, Vivienne Corringham is a peripatetic sound artist and singer who’s developed a mesmerizing technique for exploring new places. You could sum it up in three words: Walking. Listening. Singing. In practice it’s more like sonic shamanism — a way of re-enchanting the world, block by block. Corringham calls it “shadow-walking.”

“I go to a place and I ask someone who lives there to take me on a walk,” she says. “A special walk, that means something to them.”  In other words, not just a tour of local landmarks. Corringham is deeply curious about the amalgam of geography, memory and identity that gives people a sense of place.  “I want to know how people connect to the places they call home,” she says. “It might be because I’m a bit rootless myself. I suppose I want a bit of it.”

Corringham doesn’t talk much on these walks.  Mostly she listens. Binaural microphones tucked discreetly near her ears capture the full, three-dimensional soundscape — both the ambient sounds of the environment and her walking companion’s running commentary. The magic happens later, when she goes back over the same route. “Only this time,” she says, “I sing.”

Listening to Corringham sing a city is like hearing a map that exists only in sound. You follow the thread of her voice through back alleys, over bridges, in and out of crowds, while she improvises. She vocalizes wind in the trees, flowing water, the crunch of footsteps on snow, the low-pitched grumble of construction equipment, a staccato counterpoint to birdsong. It’s all wordless and untamed, even slightly feral -- which can be disturbing or liberating  depending on your perspective. “It’s playing around like children do,” she says. “You know, children really like making sounds. But as we get older, we mostly get quieter, and I think a bit of our enjoyment of sound can go.”

Among the older traditions that link walking, singing and sense of place, Corringham references Aboriginal Songlines, and the Song Paths of the Kaluli people of Papua New Guinea as influences. But the philosophy that truly shapes her practice is composer Pauline Oliveros’ Deep Listening. “It’s listening without judgment,” Corringham says. “Listening at all times to everything possible that you can hear. I think it makes you feel more open and less judgmental, such a good attitude to promote in this world and at this time in particular.”