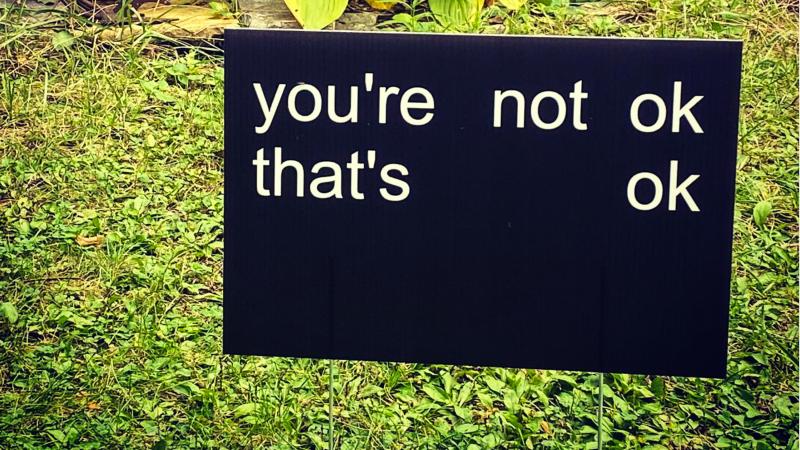 Let me take you back to the second winter of the pandemic. It was October, and there was already snow on the ground — this is Wisconsin, after all. I knew what was coming — darkness, cold, continued fear and stress. Two insufferable teenagers whose high school had just shut down their oh-so-brief in-person learning due to high community spread. And a wife working around the clock at home who was probably finding me pretty insufferable too.

The neighborhood market is a short walk away — a short enough walk that when we needed milk, I left the house in unlaced boots, boxer shorts, and a coat. Oh yeah, and a mask. Which always looks ridiculous on me with my massive gray beard.

I grab the milk and get in line. There's a woman in front of me in a housecoat and slippers. A ring of melted slush soaked up from her soles toward her ankles. Her hair was a mess. I mean, she looked rough, clutching her bread and eggs. She held the bread the same way I used to hold my son when he was a baby – the football hold. It was the only thing that kept him from crying. Lost in thought, our eyes met over the top of our masks. But that brief glance made me feel, well, not alone. Two human beings who couldn’t make the effort to put on pants.

That night, I did what I had been doing almost every night for some time now. I sat in my basement alone. I got high. I made some cocktails. I consumed TV. But that night, as I atrophied away, I felt the need to do something.

Out of somewhere it clicked — make a yard sign.

The internet is incredible. I found a local yard sign printer in minutes. They even had design templates. I chose the simplest I could find. Black background. White lettering:

The words came all at once. I was far from ok. And I wanted those who walked by my house to know they don't have to be ok either. The sign was me shouting from the mountaintop: I have given myself permission to not be ok. And that's ok, damnit. So quit trying to cheer me up.

I wanted 5 or so for my yard. But the minimum was 300. I had no idea what I was going to do with 300 yard signs but I entered my credit card information and a week later boxes ended up on my porch.

I immediately took the little metal part, put it on the paper part, and put a sign up in my yard. The black background looked great against the snow. It looked awesome.

I left most of them on my front porch. I figured if folks liked the sign in my yard and wanted one of their own, there they were. I sent a text blast to my friends who live in Madison. I am sure they told a few people. I’d say within 36 hours they were gone.

My family noticed who took them more than me — we're all at home, but I'm holed up in the basement. “I think that lady down the street took a few,” my daughter told me while baking something sweet she had in the oven (there was a lot of pandemic baking in our house). I saw a guy stand for a long time, staring at the sign and pondering it, then finally grabbing one. Some knocked on the door asking if it was okay to take one.

Then I started getting friends telling me they saw my sign on Instagram. I tracked one woman down. She had a photo of a neighbor’s sign on her feed. When I asked her if she wanted one herself, she said, “Yes! Can I have five?”

300 yard signs is a pretty small explosion, but I felt it nonetheless.

This whole American rugged individualist thing? This midwestern “everything is fine” thing? This “fake it until you make it” thing? Maybe they aren't working so well.

Maybe the pandemic is showing us where the cracks are.

I suffered trauma and grief during the COVID-19 pandemic. It damn near broke me —I’m still struggling and will be for a while, I think. But the solace and strength I need to get through all this is not coming from John Wayne on a horse. It is coming in the form of human connections. And not just family and friends who love me. But from people I don’t even know. People who have a sign in their yard that reads, “you’re not ok. That’s ok.” And that’s okay with me.