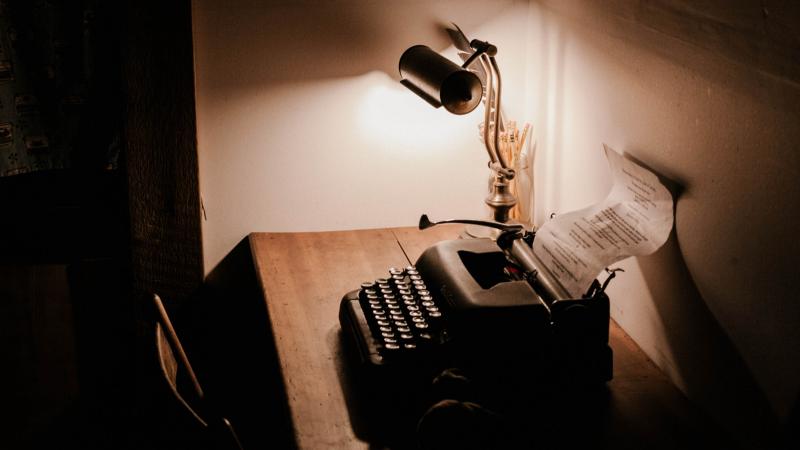 A few years ago, Tyler Knott Gregson spotted a vintage typewriter sitting in a antique shop, the absolute picture of a heavy, ornate mainstay of bureaus and reception desks before World War II.

"It was beat up in all the right places, one of those ones that looks made to be beat up," said Gregson, speaking with Charles Monroe-Kane for To The Best Of Our Knowledge. "But it was so iconic and perfect." He did something unexpected with it. Gregson took a discarded book, ripped out a particularly well-worn page, shoved it in between the rollers, and began to type a poem on the spot, just to see how it felt. He wrote a complete poem in one go, which lead to his collected works entitled "Chasers of the Light."

Gregson is not a poet by trade — he's a photographer and author — but the poem flowed out of him, tapping into a wellspring of creative energy he didn't even realize he had pent up until that moment. No hypothesis to formulate, no thesis statement to prove, no structure to be chained to. "Poetry for me had no rules. It could be literally anything I wanted, in any way I wanted to say it. That typewriter unlocked a freedom I've never felt before."

He bought the typewriter and challenged himself to write a poem a day, using aged materials he found here and there — a receipt, a spare scrap of paper, a library card — as the physical medium for the message of his analog poetry. This aesthetic helps lend his work a visual element that has garnered popularity on his Instagram, which still hosts his typewriter poems nine and half years after he committed his first poem to the page.

"My brain is always filled with words, and I've never known what to do with those words," explains Gregson, describing how producing the daily poems energizes him creatively. "Poetry helps me clear out that clutter that's doing nothing but rattling around and making noise."

Embedded below are just a few of his more recent works.

Read all of Tyler's poems by following him on Instagram.