Ursula K. Le Guin on a Literature of Ideas 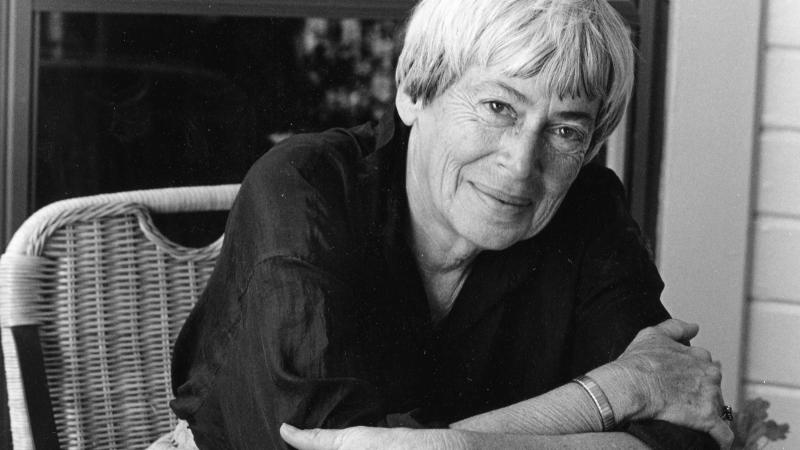 Ursula K. Le Guin passed away this week Monday. She was 88 years old.

Le Guin was known for marrying the tropes of science fiction and fantasy to big ideas drawn from spirituality, economics, sociology and beyond. That eclectic mix made for impactful and relevant stories that transcended genre. The author earned a National Book Award as well as repeated Hugo Awards and Nebula Awards for her short stories, essays, volumes of poetry and novels, notably for "The Left Hand Of Darkness," "The Dispossessed," and the "Earthsea" series.

Below is a transcript of their conversation, edited for clarity and length.

Steve Paulson: I think what he's saying is that science fiction is sort of this one genre where ideas are taken very seriously and "literary fiction" is normally about the messy lives of people. Ideas themselves are not what necessarily drives the fiction.

I think he's saying that if you want big ideas, science fiction is the place to go, in all the various types of literature.

Ursula K. Le Guin: I think there's a lot of truth in that, particularly since our realistic fiction has increasingly concentrated on sort of dysfunctional urban lives and does not have a very broad canvas often anymore. But on the other hand you take a book like "One Hundred Years of Solitude" and that thing is raging with ideas, isn't it? There's a lot of ideas in that book as well as fictional events.

SP: So you are one yourself? You'll proudly claim that title?

ULG: Oh man, I was about the geekiest 15-year-old girl you ever saw. I'm no good at the science part of it, that is to say the hard science. Anything that involves math, forget it. But I know my way around the social sciences, and of course that's what I use in my science fiction.

SP: So what is it about science fiction — or fantasy if you like — so conducive to exploring big ideas?

Take something like Philip Dick's "Man in the High Castle," where the idea is simply that Germany and Japan won the Second World War. And America is an occupied country. Well that's one of the ideas with the book, a sort of counter-history. Part of the joy of reading that that wonderful book is just the way he worked it out. "What would it be like if…?" And somehow we all seem to enjoy doing that.

SP: Many of us do speculate about those things in our own lives, but we don't take the trouble to actually try to figure it out, point by point. It sounds like that's what you're saying a lot of science fiction writers do.

SP: So do you see your own science fiction work as a literature of ideas?

ULG: Some of it. I was pursuing the thought, sort of. Some of it is more like fantasy in the sense that I'm really just doing it for the pleasure of invention, just the way a musician invents a tune and fleshes it out into a symphony or something. I invent a place, or some people, and make a world for them. I get a lot of pleasure doing that, and apparently a lot of readers share the pleasure.

SP: The traditional rap against science fiction, at least among people who don't like it, is that it cares more about ideas and speculative worlds than about the quality of the writing itself. What do you make of that criticism?

ULG: It was largely true 30 or 40 years ago. There was a certain refusal to write literarily among a great many science fiction writers, most of whom were men, many of whom were trained in engineering and similar fields. They didn't want all those frills and folderol. They just wanted to tell a story. Which is kind of a myth — I mean, you you can't just tell the story. But a lot of early science fiction was pretty crude.

SP: I know there are some people who were often pegged "genre writers" who kind of bristle at that word. They don't even like the sense that there are these different places in the bookstore, that there's the science fiction section and the crime section and the historical fiction section. Why can't it all be shelved together? Are you one of those people or do you kind of where the science fiction label proudly?

ULG: That's an awful big question that involves a lot of my whole life. To be labeled a genre writer is, in the eyes of about 90 percent of readers, is to be labeled second rate. Face it. So obviously, a lot of people bristle and say "all right, I'm a sci-fi writer and I'm proud of it." I just wish they'd forget the darn labels.

A lot of my books don't classify easily as sci-fi — or, God help us, even science fiction. They may be fantasy, but that may not be the important thing about them. These genre labels are marketing labels. They make it easy for readers who are addicted to a certain type of fiction to find it in the library or the bookstore. They make it easy for the publisher to sell it. Otherwise they are useless. And they can be very misleading when you get writers like me. Or like Michael Chabon. I don't care what genre they say I'm writing in — I have this book I want to write.

Now Michael likes imitating, and doing pastiche work too, which I don't do. But to call him a mystery writer because his last book is a mystery would be ridiculous. So I have to answer your question in general: I wish you'd just unstick the labels from me and just read the book and decide what it is yourself. But perhaps that's wishful thinking.