We Call Them Fish. Evolution Says They're Something Else. 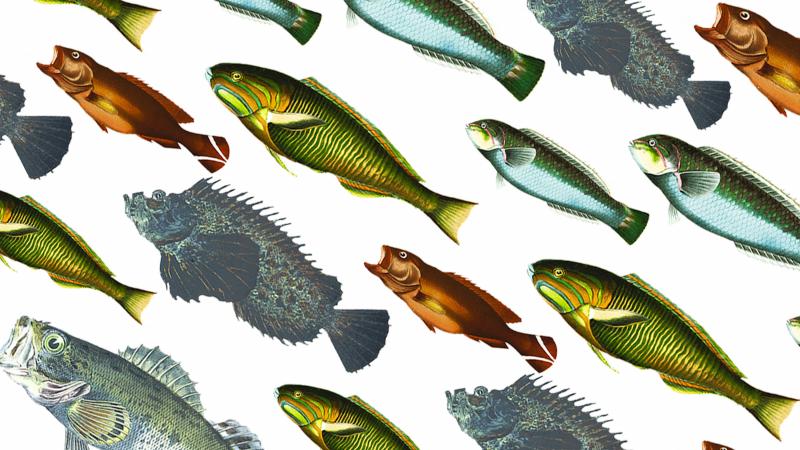 Stanford University’s first president, ichthyologist David Starr Jordan, is the complex main character of a new book, "Why Fish Don’t Exist: A Story of Loss, Love and the Hidden Order of Life," by Lulu Miller. The book is a wondrous mash-up of biography, memoir, history and even murder mystery. "To the Best of Our Knowledge" producer Shannon Henry Kleiber talked with Miller, who is co-founder of NPR’s Invisibilia and contributor to Radiolab, about Jordan, beginning with a tale from the 1906 San Francisco earthquake.

Shannon Henry Kleiber: Yes, even just the title, "Why Fish Don't Exist," we think, "OK, fish, I know what a fish is," but what does the title mean?

Lulu Miller: Well, I have a question for you. After reading it, do you think fish exist? Answer honestly.

SHK: So I think fish exist in a way that might not be the way we thought they did.

LM: Yeah. I like that. To me, it is an example that just intersected with David's story in a really cool way, because he was a fish collector and ichthyologist, a person who studied the supposedly existent creature of fish. There has been a profound revolution in scientific circles of people who think about how to classify animals that pretty convincingly calls into question the existence of fish as a kind of creature. So it challenges the category of fish.

Maybe that just sounds like a fussy, semantic distinction and you wouldn’t care if your day job isn’t a taxonomist. But for me, when you really think about what that means and if you can do this mental scrunching required to let the category go, then some pretty profound things open up.

SHK: When did you first hear of the story that would become your book?

LM: [A museum tour guide] just kind of offhandedly told the story. He pulled a hammerhead shark out of the tank where it was being stored. And there was a label tied to its eye tube, sewn through the skin. The label had the species name. And he told us the story about how the 1906 earthquake in San Francisco destroyed a whole lot of the fish collection and that the curator in charge of things afterwards invented this technique of tying labels directly to the specimen. And it was a small thing, but I just remember standing there and thinking [it's] so human that an earthquake would wreck your order and scatter the names everywhere. And your response would be, "Well, I'm gonna invent a way to get back at you, chaos!" And in that moment, it just struck me as the silliest thing to believe that you could outsmart chaos itself.

SHK: Wow. In that earthquake, the 1906 San Francisco earthquake, 3,000 people were killed. It was a 7.9 on the Richter scale. What was gained and lost that day for David Starr Jordan?

LM: The really interesting way to ask it: What was gained and lost? What was lost were decades of work and meticulous ordering. And there were possibly even species that were lost to science because there were a few in there that hadn't yet been identified. But I think what was gained was shortly thereafter, he was so desperate to keep going and fight back against the chaos that kept invading his life, that he invented this new technique of sewing a specimen label directly to the creature itself, literally using a needle to attach the scientific name, to attach man's knowledge to the specimen. And so I think in a weird way, anytime this guy is hit with tragedy or destruction, it's almost always a moment of innovation.

SHK: So, you had pinned an idea of hope and inspiration on Jordan, and then you got to know him better, as people do when you research. And you're a biographer and a reporter and a detective really in a lot of ways in this story. Did he fulfill this idea of hope for you or did he teach you something different?

LM: He's so complicated. In certain ways, he did. He showed me a very different way to react to the sense that as a human, your chances are pretty doomed. He showed me that blind confidence really can get you results.

I think I went into it thinking that hubris — as the Greeks instruct, as my dad kind of instructed me growing up — was always dangerous and would ultimately lead to humiliation. And I think he shows real potential, for better or for worse, that hubris can do you some concrete good.

But there also turned out to be a profound set of troubling things about him. And what I found is there was some pretty intense both-ness in there.

And so I think about him as definitely someone who has changed how I see how to live — not in one way or the other, but in multiple ways. He's full of lessons.

SHK: I can totally picture you in these manuscript rooms and reading these books that you find, like "The Philosophy of Despair," the black book that you describe so well, and all these different documents and letters and thinking, "Oh, I understand him. I'm seeing this." And then, there's a discovery. And it's beautiful in some ways. And then there's another discovery and you are disappointed. And I felt bad for you.

LM: Well, that's what made it fun, though, because it’s history; this guy is dead. But he was so vibrant. He was like this muscly snake that just kept moving in my hands. And he's full of charm.

In certain ways, studying him actually felt really similar to making a radio piece, where you have a ton of tape and then you're whittling it down to these gems where someone's really funny or emotional or dark. He is the full spectrum — he's charm, he's hilarious, he's dark. Real dark.

SHK: He's an incredible character. He is hero and villain. All in one.

SHK: So what was the most surprising thing to you?

SHK: This story you're writing about — the historical part — is very messy and unexpected and surprising and not easily tied up. And then you go into your personal story, which is also, like so many of us, messy and not easily explained. And it matches in a way.

LM: Yeah, it does. I've always had almost like a parable-shaped hole in my heart, growing up with a very atheist father. And then both of my parents were professors. So ambiguity really reigned in our home — nothing means anything. Or if it means something, it could mean many things. There was just no moral instruction. And I think I've always had actually a craving for more.

I think a lot of people grow up with moral instruction and then want more ambiguity. But I'm one of these weirdos who actually wants more dogma. I don't know why it turned out this way, but I do. And that's part of what has always drawn me to storytelling.

As I've slowly, clumsily tried to become a better reporter and learned the art of reporting, I realize that story can actually be very dangerous in reporting the sense of story, a clear moral. I have tried to ignore my cravings for moral clarity and black and white and actually really study the both-ness.

SHK: The way you bring things up, these different stories and characters, is about curiosity and you go in these different directions, and then we move on to the next thing. Did it make you more curious as you worked on this?

LM: Yeah, it totally did. Especially these days with Google, if you have a question, it's so easy to go there and just get Wikipedia as your first primer and sometimes your last primer. I think this reminded me that the world as we know it is far less known than we think it is. It's so easy to think that we have a handle on everything now — that science knows, that we have it all mostly figured out. And maybe there's one new little bacteria that will be discovered, but basically, we've got it down. And it just was so far from that.

We're just so deep at all times, in the midst of these revolutions and paradigm shifts. And we're not done. We haven't arrived anywhere. We're at a clumsy, approximate, best guess of our understanding of the world. And there is so much more waiting in the wings.