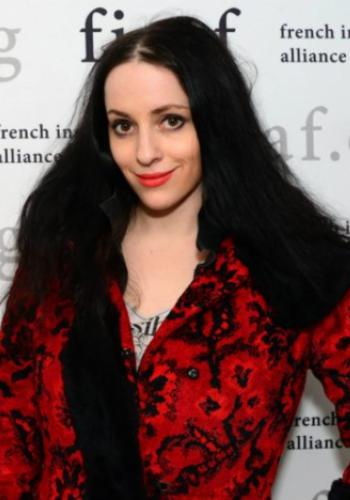 Molly Crabapple is an artist and writer living in New York. Brothers of the Gun, her illustrated collaboration with Syrian war journalist Marwan Hisham, will be published by Random House in 2018. Her work has been described as “God’s own circus posters,” by Rolling Stone, but beneath the lavishly detailed surface, it engages injustice and rebellion.

Because of Molly’s 2013 solo exhibition, Shell Game, a series of large-scale paintings about the revolutions of 2011, she was called “an emblem of the way that art could break out of the gilded gallery” by The New Republic. In 2015, Molly Crabapple was awarded Yale Poynter Fellowship, and received a Front Page Award for her art of rebel-held Aleppo. Her art also earned her a 2014 Gold Rush award, and she was shortlisted for a 2013 Frontline Print Journalism Award for her internationally-acclaimed reportage on Guantanamo Bay.

Molly is a contributing editor for VICE and has written for The New York Times, The Paris Review, Vanity Fair, The Guardian, CNN and Newsweek. Her published books include the memoir Drawing Blood (Harper Collins. 2015) Discordia (with Laurie Penny; Random House, 2012) on the Greek economic crisis and the art books Devil in the Details and Week in Hell (IDW 2012).

Molly has been called “equal parts Hieronymus Bosch, William S. Burroughs and Cirque du Soleil,” by The Guardian; “THE artist of our time” by comedian Margaret Cho, and “a brilliant and principled artist” by BoingBoing. She spent four years as the staff artist of The Box, one of the world’s most lavish (and notorious) nightclubs. Molly has taken her sketchbook from burlesque halls to refugee camps, always with a skeptical eye for power.

Molly is the illustrator of Matt Taibbi’s New York Times bestseller, The Divide. She has collaborated with Spike Jonze to create backdrops for the 2013 YouTube Music Video Awards, and with Esperanza Spalding on projections for her concerts. She created art for Patton Oswalt’s DVD, Tragedy Plus Comedy Equals Time.