'A $400K Container For A Washing Machine': An Author Grapples With The Inherent Ickiness Of Homeownership 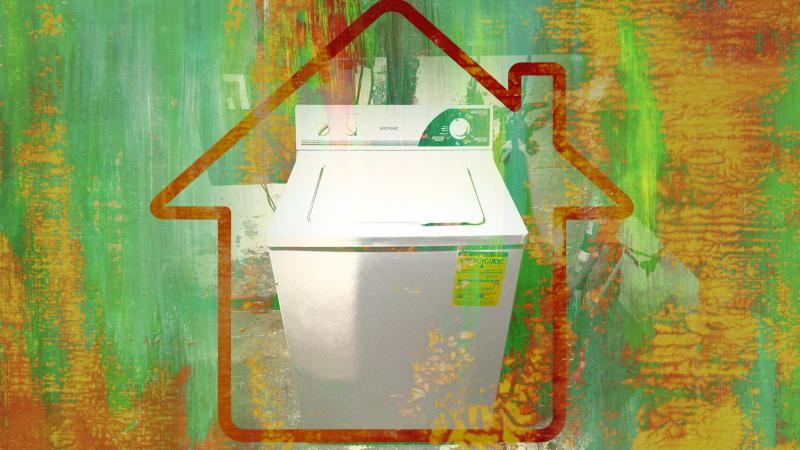 Teenagers imagine their first steps into adulthood taking place on a university campus — it’s partly why so many are eager to return, even to campuses radically changed by social distancing in a pandemic. For recent graduates, "adulting" might look more like a 9-to-5 job and free time devoted to dating and an active social life.

But author Eula Biss suggests in her latest book "Having and Being Had" that the markers along the road of adulthood are more complicated than all that.

"My adult life, I decide, can be divided into two distinct parts: the time before I owned a washing machine, and the time after," writes Biss. "I consider the possibility that the washing machine — more than the house — has changed my life…(and) what I've really done is buy a $400,000 container for a washing machine."

In her book, Biss reckons with this new phase in her life, moving from an apartment in Chicago to the first house her family owns. And while that dream is about as American as proverbial apple pie, Biss ruminates on the reality that it’s an impossible dream for many people.

Speaking to Steve Paulson for "To The Best Of Our Knowledge," Biss talks about her personal discomfort with homeownership, and how it connects deeply to the alienation and damage that results from massive wealth inequality.

This transcript of their conversation has been edited for clarity and length.

Steve Paulson: Eula, you seem to have very complicated feelings about the objects in your life — everything from your furniture and your piano to your washing machine. And above all, to the house you recently bought, which I know is the first house you've ever owned. You seem to take pleasure in all of this stuff, but maybe sometimes at an emotional cost. Maybe there's some guilt about these markers of affluence in your life.

Eula Biss: You're right. It's a complicated emotion. Guilt is part of it, but I think it's a stew of emotions. Guilt over having things that I know other people don't and can't have. Guilt over what the production of those things or the acquisition of those things cost other people's lives. But I think I also just have a deep discomfort with material things, even though there is some attraction for me to nice things or beautiful things — the aesthetics of things.

EB: Actually, the catalog itself is gross. I'm not even sure I opened the one that I wrote about because it was so huge. It was so massive that its bulk just offended me.

SP: So what catalogs do you look at?

EB: All these uninvited catalogs come along and I'll flip through — IKEA and Crate and Barrel and Room and Board. It feels like a kind of voyeurism. It's not unenjoyable.

SP: What I find so interesting about this is that there's both pleasure and discomfort, kind of simultaneously.

EB: Yes, pleasure and discomfort and disgust. You know, those are some of the same emotions that came up for me when I bought a house. Occupying this house has made my life easier and more comfortable in a number of ways. Some of them small, some of them large — from minor things like the fact that I don't have to carry my bicycle up a bunch of stairs to an apartment anymore to more major things, like my son walks to our local elementary school. But even though — and maybe even because — I was enjoying all the comforts of this house soon after we bought it, I was also somewhat disgusted by what felt to me like the excesses of middle-class American life.

EB: You know, having the amount of space I have in this house — it's a two-bedroom house — really it's a lot of space for three people.

This was made obvious to me when, very early in owning the home, before we'd even put any furniture in our front room, a woman knocked on the door — a Mexican woman who had four children with her — and she said, "We want to know if we can rent your front room." And I said, "Oh, I'm sorry. We live here." But she was confused because there is absolutely nothing in that room. And she said, "but it's empty."

That was a moment where I was really forced to reevaluate the amount of space I was occupying, and how excessive it seemed from the point of view of a woman who thought just one room in our house would be enough space for her family of five.

SP: It seems like we're not just talking about material possessions or even affluence. We're also talking about white privilege. And it's worth pointing out that you live in a racially mixed neighborhood in Chicago, which is gentrifying. New people are moving in who are white — like you — while the older residents are Black. What kinds of issues does that raise for you?

EB: Lots of issues and thoughts and feelings about white privilege and my participation in that system. White privilege, going back hundreds of years, is just intrinsically tied to property rights. And there is a long network of laws and policies — some of them official, some of them unofficial — that have benefited white people like myself and allowed us to build wealth and own property at the expense of other peoples. Not just wealth, but other people's freedom and livelihoods.

Knowing that history is part of what makes me feel very conflicted about owning property. And at the same time, do I want the emotional, psychological security that comes with owning a house? And also the financial security of this investment that will then be passed on to my child? Yes, I want that. And that's at war with my discomfort.

SP: So learning about that, did that make you feel worse about owning your own house?

EB: Yeah, in some ways. I think it just helped me understand what I'd really invested in, which is a kind of linchpin of capitalism. I would like to believe that I'm anti-capitalist and that I live outside the system. But I definitely don't, and I'm deeply invested in the financial sense.

EB: You know, when I started working on this project, I thought of myself as middle-class. That term itself is so wide and poorly understood and poorly defined in this country that it's close to meaningless to call yourself middle-class.

When I started looking at numbers, I started seeing how unusual it is for someone to have not the stuff that I have, but the kind of security that I have. By that, I mean health insurance, a salary, a savings account that I'm keeping for my child to go to college, a retirement account. That collection of safety nets is what I believe makes me rich.

SP: So you consider yourself rich?

EB:After doing quite a bit of anguished thought and research, I think I do. And I think it's politically important for me to acknowledge my economic privilege, my wealth — which would, I'll mention, be fairly invisible to a casual observer. My life looks like a modest middle-class life. But I understand myself as rich.

SP: One of the things that I found so startling in your book — you write very explicitly about how much things cost and how much money people actually make. And you reveal that your salary is $73,000, your household income is $125,000. This is not the kind of thing that people talk about in public, unless they want to talk about how little they make, or how underpaid they are, how exploited they are. You put that out there.

EB: It was extremely uncomfortable to do that. I made the decision very early on in this book that when I talked about money, I was going to name explicit sums. That was a rule I made for myself. But I found it excruciating — harder than almost anything I've written about.

SP: Why does it make you so uncomfortable?

SP: I have to tell you, the whole time I was growing up, my parents made a point of never telling me what my father's salary was. He was a university professor, and that was forbidden knowledge. In fact, I don't think I've ever known about that my whole life.

EB: Wow. And what do you think they were protecting you from?

SP: They worried that maybe I might either brag about it, or I would tell my friends about it ... I don't know, exactly. So that's a really good question. I'm not exactly sure.

EB: That's very interesting, I think that it's still considered very private. Especially for people of the middle class and upper-middle-class, I think it's pretty close to a taboo to name your own salary. Name the exact price you paid for a house. Name the amount of money that your college education cost.

But what was hardest about it for me was not just feeling exposed. It was being exposed in front of myself. I think I did have this fantasy of myself as an artist who lived outside the system and was anti-capitalist.

SP: But there's another conclusion you might come to: Maybe capitalism has more value than you realize. I mean, it gives you some of these things that you had actually wanted — retirement, the possibility to save for your son's education, to have a house that appreciates so you're not just throwing away your money in rent. Maybe it's not so bad.

EB: Well, it's not bad for me, but I get those things because other people don't have them. I think we could imagine an economic system in which everyone would have their retirement provided for, and private retirement accounts would not be something that people needed or did. We could imagine a system in which education was provided for everyone.

I am very aware of the fact that I'm on the winning end of capitalism. But do I think that my community, my immediate neighborhood, the society at large, have benefited from that system? No, and actually, I think that's where the loss comes from in my life.

I can see all over, all around me, ways in which this system has damaged people that I care about, and damaged my ability to have close, communal relationships with the people around me.