'This Novel Has Hurt Everyone Around Me': A Frank Conversation with Karl Ove Knausgaard 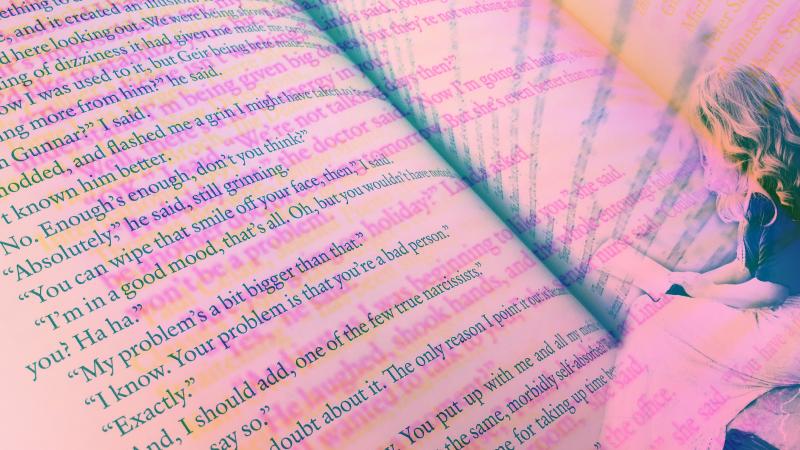 Everyone seems to have an opinion about "My Struggle," the six-volume autobiographical novel by Norwegian writer Karl Ove Knausgaard.

Some people believe it’s a work of genius by a modern-day Proust.

Others consider the 3,600 pages of these books — often recounting in mind-numbing detail the minutiae of Knausgaard's life — a self-indulgent bore.

Whatever your take, Knausgaard has become one of the world’s most talked-about writers of the past decade.

Knausgaard himself regards this literary project — six volumes published over six years, concluding in 2018 with the final volume "The End" —  as a great experiment.

He started the series "out of despair," he told "To the Best of Our Knowledge" executive producer Steve Paulson.

"There was a period of five years where I just couldn’t write and this was a kind of desperate last effort," Knausgaard said.

So he started writing about his own life as a stream-of-consciousness exercise, with virtually no editing. He also vowed to be brutally honest, even when he wrote about the people closest to him, including his alcoholic father and his wife, who had a mental breakdown. His marriage ended shortly after he finished the last book, though "I don’t think the writing of the book had anything to do with it," he said.

Paulson caught up with Knausgaard after the final volume in the series was published. The two talked about truth, memory and the perils of writing about the people closest to you.

This Q&A has been edited for brevity and clarity.

Steve Paulson: You write about the most intimate details of your life and your friends, your family, even your wife, Linda. It seems like there’s nothing off limits, even if this kind of honesty means personal relationships are sacrificed, and possibly even your marriage.

Karl Ove Knausgaard: When I started the first book, I didn't think about the consequences. I didn't think this was going to be published or get a lot of attention. I was in my own room and wrote for myself. I had to create a place where I could be completely free and say whatever I wanted to say.

When the book was about to be published, I had to send it out to the people that I'd written about, and then I realized the consequences. I had to face them and all the difficulties and problems that came out of it.

SP: The big theme in these books is your very difficult relationship with your father, who was an alcoholic and sometimes violent and quite nasty to you. Some people on your father's side of the family did not agree with what you wrote about him. They said you made up certain scenes. For instance, you went to see your father near the end of his life. He was lying on the floor, drunk, and had soiled himself. Your Uncle Gunnar says this never happened. In fact, he sent you an email with the subject line "verbal rape." Didn’t he try to block the publication of the book?

They wrote a letter to a newspaper and everyone on my father's family side signed it. This was before publication of Book One.

The story is very simple.

My father was an alcoholic. He moved back home to his mother’s house, locked himself in, started drinking massively and died there. My brother and I came down to the house the day after he died and it looked like a junkie’s nest, with bottles everywhere. It was really terrible.

I wrote about that and then my uncle read the book and said, "No, this is not true. Your father didn't die over two years; he died over two weeks. He didn't die of alcoholism; his heart stopped." He said, "There weren’t many bottles, so this just isn't true."

And being a writer, I use my imagination. I'm used to adding and constructing things. And I had this ice cold fear in me, what if I exaggerated? When you write about memories, you start to forget what's writing and what's memories. That's very common for a novelist.

SP: You could've done some fact checking. You could have checked with Gunnar before you wrote that scene. But it sounds like you didn’t want to do that.

KK: No, no. This book is about what's in my head. I didn’t do any research at all. It's about memories and it's also about fake memories — where you think you had the experience but you haven't. Because that's how we view the world.

We don't know what's in a memory, what’s true and what's been told to us.

So did I make up that scene about my father’s death? That would've been a crucial blow because this book was supposed to be honest. But after the book was published, I got a letter from someone with the ambulance who was actually in the house when my father was dead and her description of the scene was worse than mine. So it got confirmed, and I realized it was my uncle who was lying.

SP: So this book is an exploration of the relationship between memory and truth. How do you sort that out?

KK: It’s also very much about memory and identity.

I don't know how many memories people have on a string that makes you that person you think you are. But it's not that many. A life consists of so incredibly many things that are happening non-stop in your life, and some of them fit into your narrative of the self and some of them don't. Those that don't, you just repress or take away. I think it's almost an obligation for a novel to go in there and explore the differences between the bare life of things going on and our versions of it.

There are many, many versions of a life. This book is one version of who my father was. If my father had written something, his version would have been completely different

SP: Are you still on speaking terms with your uncle?

KK: I haven't spoken with him since the first book came out.

SP: You've described the process of writing these six books as a kind of personal torture. You write, "This novel has hurt everyone around me. It has hurt me and in a few years — when they're old enough to read it — it will hurt my children." That's an amazing thing to say and yet I'm guessing that if you had to do everything all over, you would do it exactly the same way again. Is that true?

KK: If I had known how hard it would be to make it, I don't think I would have managed to start it. But I didn't know that. I started it very innocently and that made it possible. But I don't regret doing it.