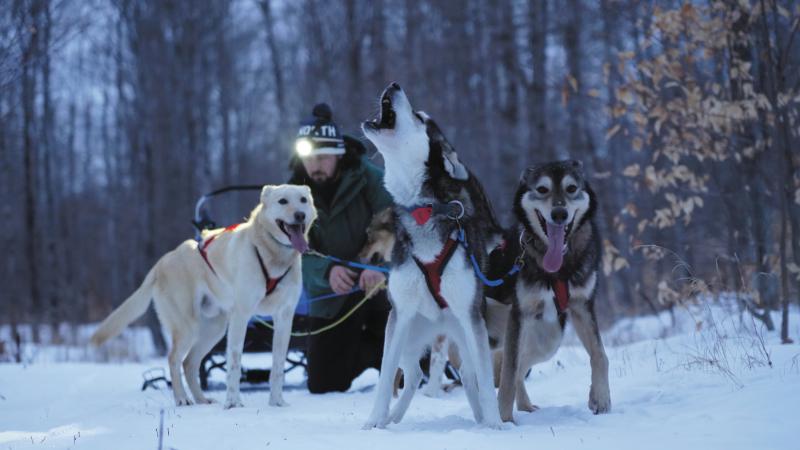 Dogsledders Blair Braverman and Quince Mountain have built an outdoor adventure life in the Northwoods, where they train teams of dogs to race. But for the husband-and-wife team, the pack is also part of their family. It’s about the mushing, but also the profound dog-human connection. The two have developed a shared language with their dogs.

Braverman and Mountain have each raced in the Iditarod in Alaska, and individually appeared on the survival show, "Naked and Afraid." The pair create community wherever they go, from their ardent Twitter followers to fellow mushers who, with their dogs, feel the call of the wilderness. They have a new book out, "Dogs on the Trail: A Year in the Life."

"To the Best of Our Knowledge" producer Mark Riechers spent the day at a dog sled race with Braverman and Mountain, and producer Shannon Henry Kleiber followed up with an interview.

Shannon Henry Kleiber: Can you name a few of the dogs and give me some of their personality traits?

Blair Braverman: Well, we have a couple lead dogs, but our senior leader is Pepé.

BB: Slash matriarch, slash practically like another musher on this team based on how much she has authority and decides how things are going to go. And Pepé is so smart.

QM: If she could type, she would have spreadsheets. She would have reading glasses. We would just defer to her for all the executive team decisions.

BB: I wish she could manage my whole life for me. 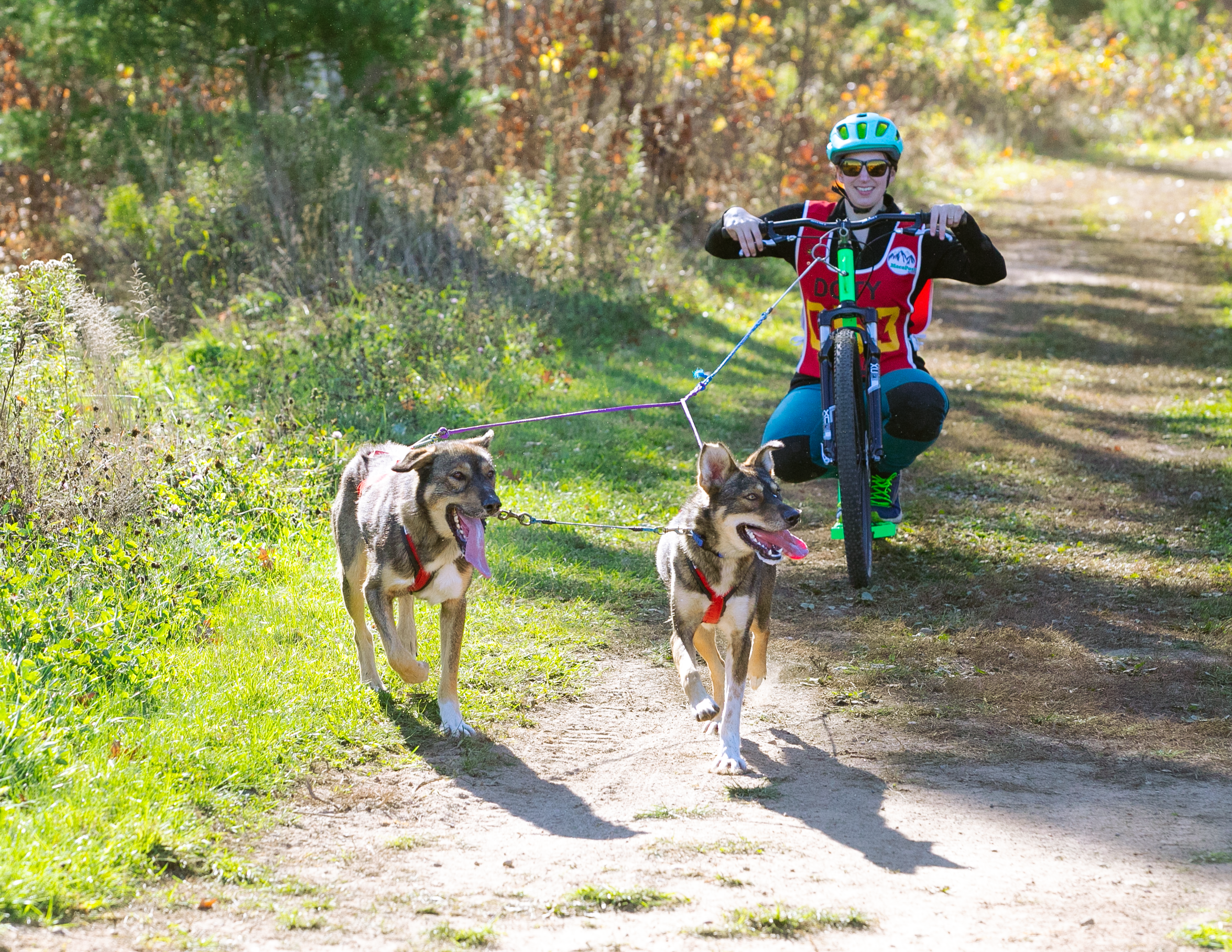 SHK: Wow, that's incredible. And so, who’s behind her?

BB: She has her kids who are now 5 (years old). Clem and Spike and Willow. And they are very chill. She has very chill children. None of them have quite her confidence and leadership instinct. But they're very agreeable, and they just are happy and want to go where she goes.

Sometimes she gets a little impatient with them if they're next to her because nobody is thinking at her level, and then she'll make sure they're listening to her and respecting her. 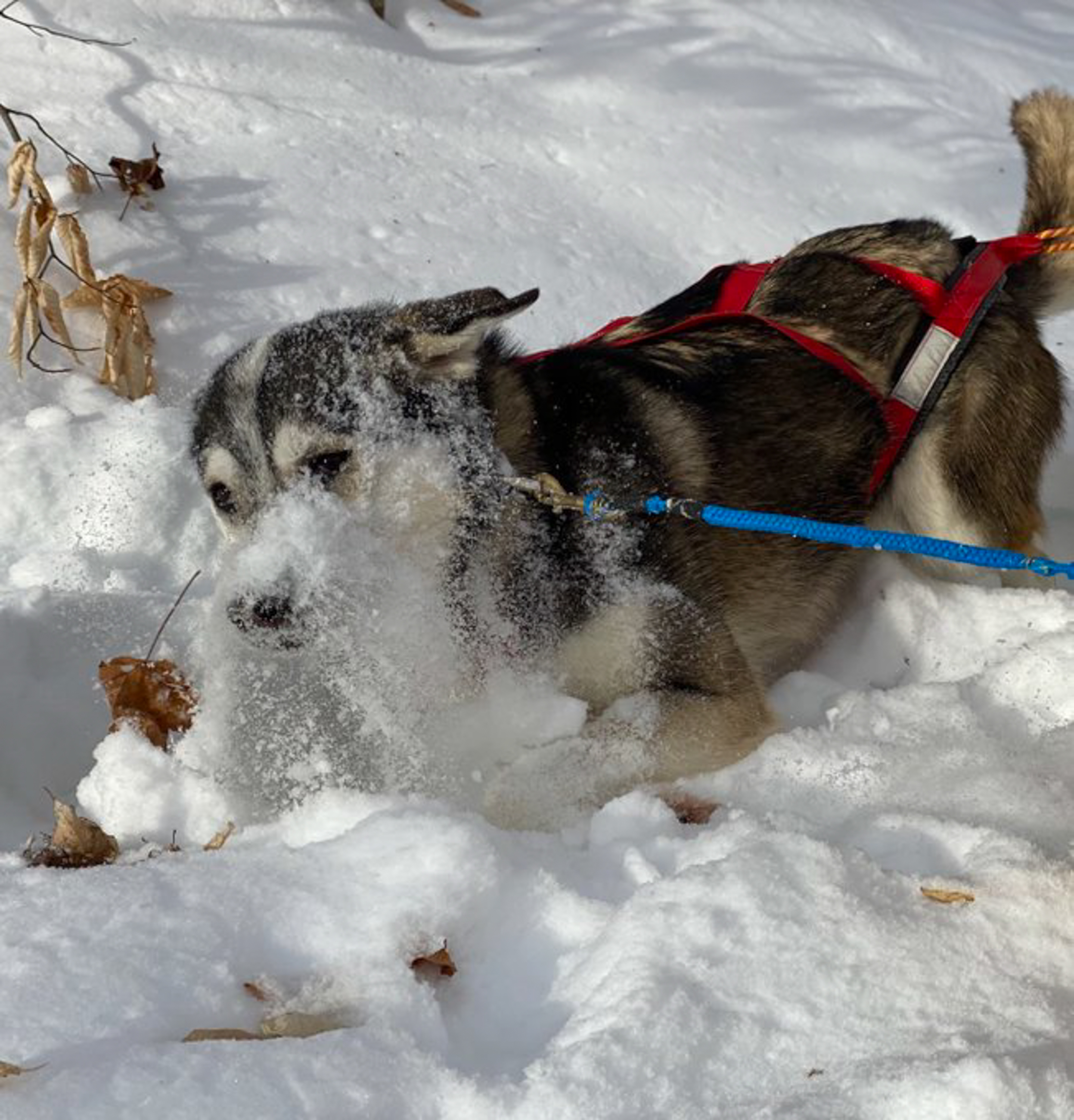 Pepé gets busted acting like a puppy. Blair Braverman

QM: I mean, it'd be like being Beyoncé's kids or something. Maybe they’re really good at singing, but you know, they're not mom.

Pepé has yet to meet a new trail she doesn’t love, but we always ask for her opinion anyway. pic.twitter.com/mF9999y9Ey

SHK: I love the litter name themes. Is that a thing in the musher world or your invention?

QM: The litter themes are a convention in the mushing community, and it's also how mushers pass time. When we're on road trips, we'll be driving, and we'll be like, "OK, basketball players! What would be the names? Oh, Kobe, Curry, you know." Pepé's kids — we talked about Buffy and Willow and Spike and Clem. Those are from "Buffy the Vampire Slayer." 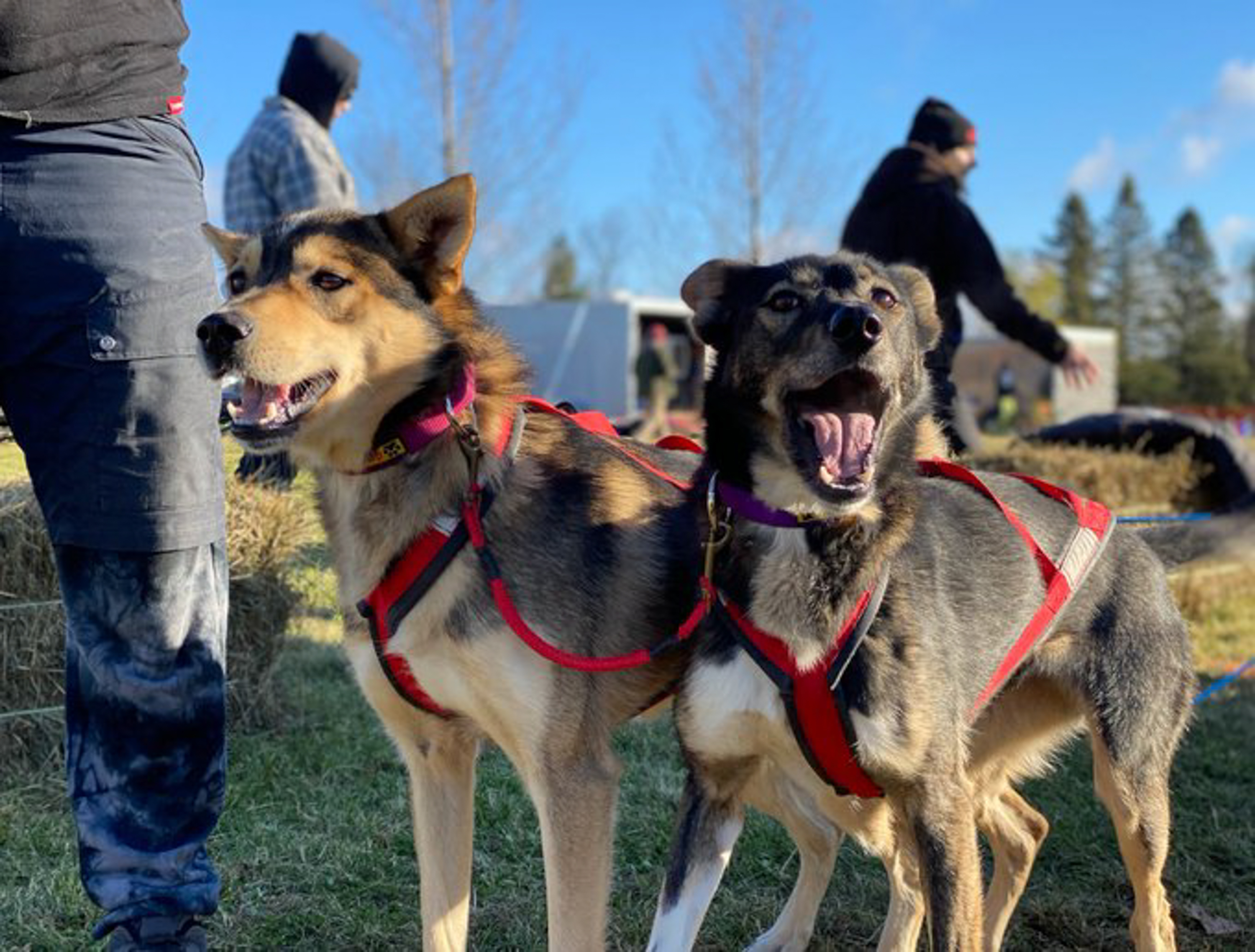 Clem and Willow in between bikejorning events. Blair Braverman 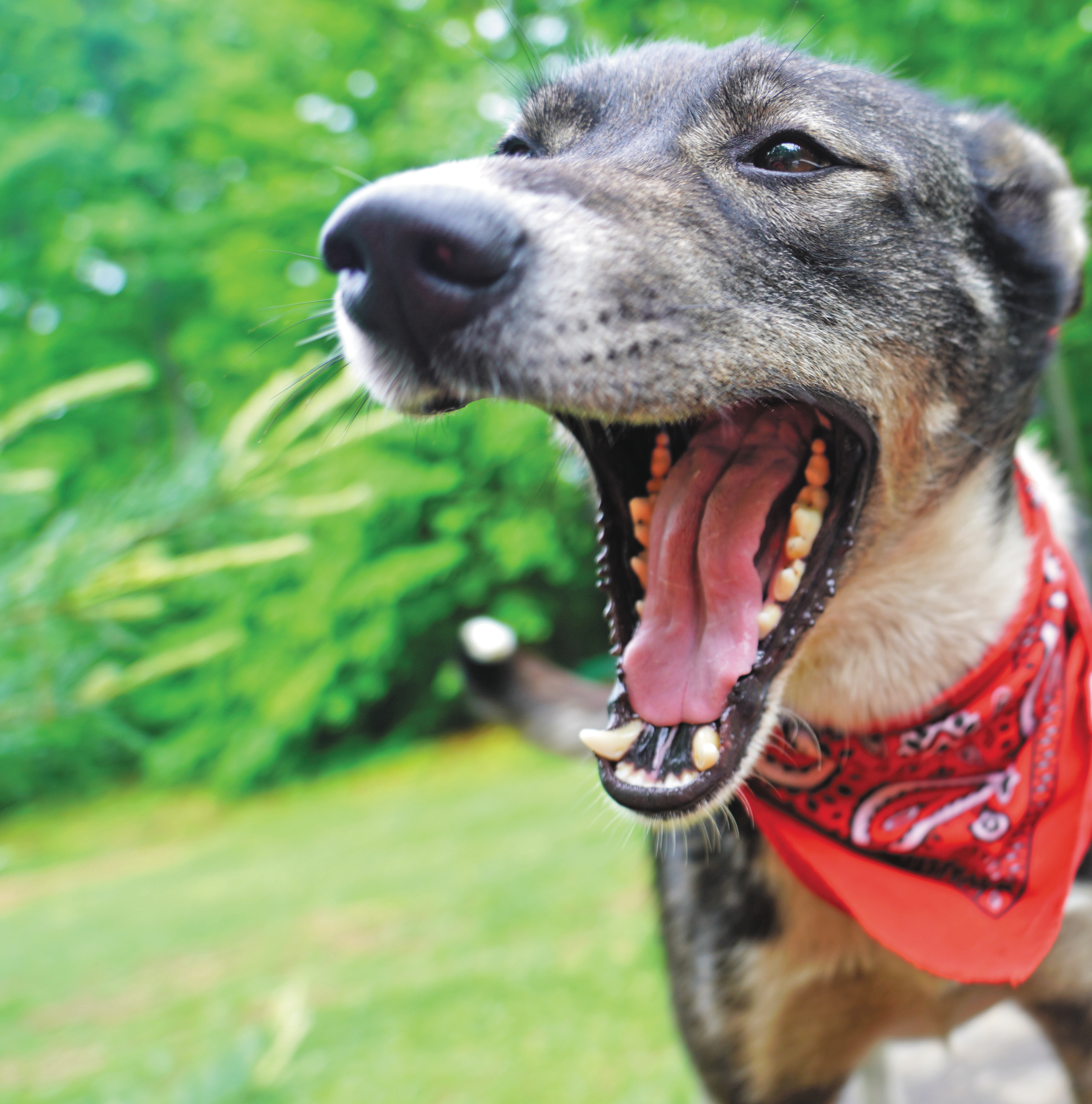 SHK: How do you train the dogs to be competitive or can you? And is there a training philosophy that you both have?

BB: They are more competitive than we are. 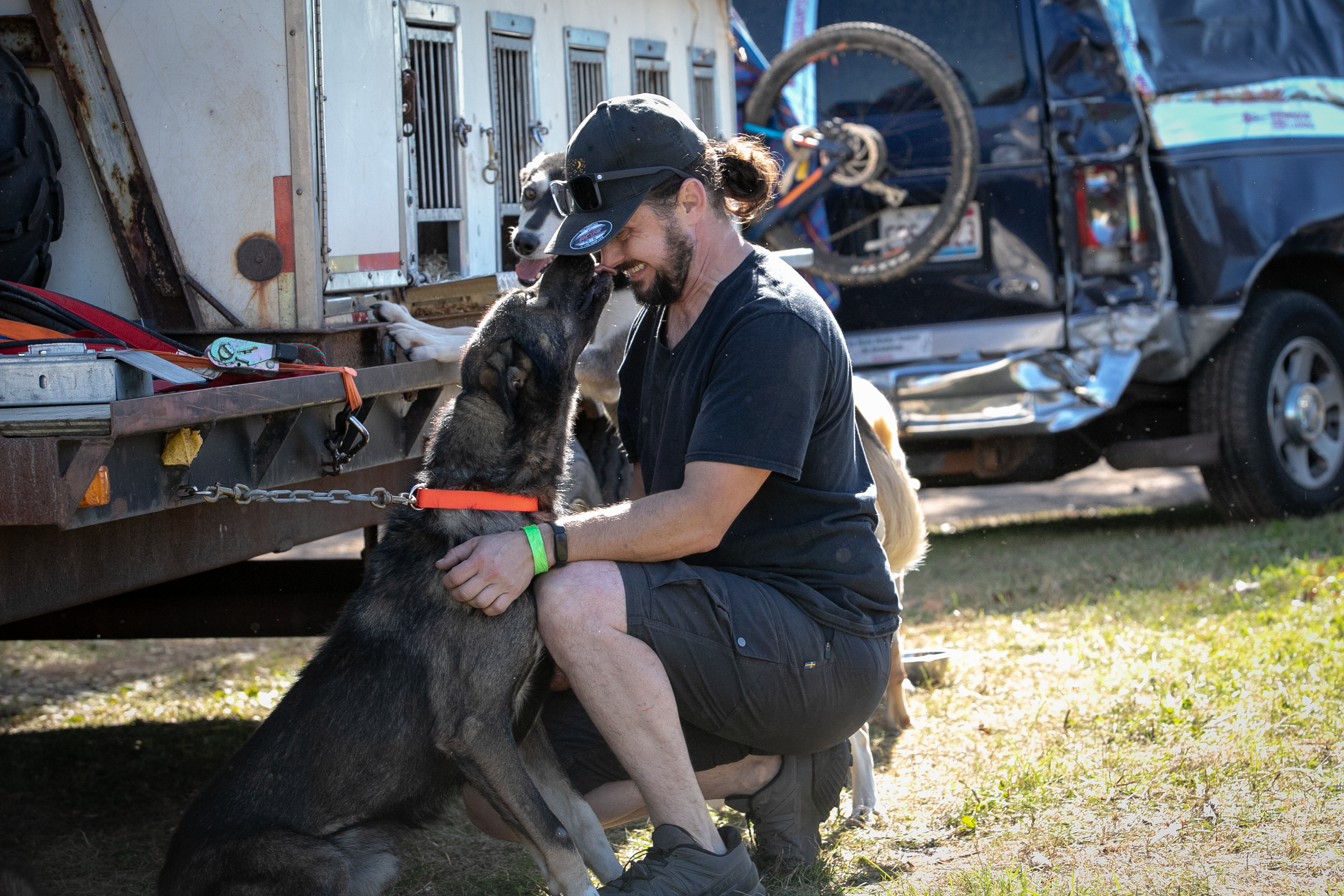 Quince gets a boop on the snoot. Mark Riechers (TTBOOK)

SHK: Yeah, it seems like they love it too, though. And am I projecting that? It seems that they love what they do so much. Is this work to them or fun or both?

BB: Once someone has seen sled dogs in action, there's no question you can just see the excitement that they have and the drive they have to run.

And that is the kind of energy that these dogs bring to running. It's the same kind of instinctive drive to do this thing that makes us feel fulfilled, and you get a whole team together who has that kind of energy. And it's completely addictive because you're traveling with dogs who are doing the thing they love most in the world. 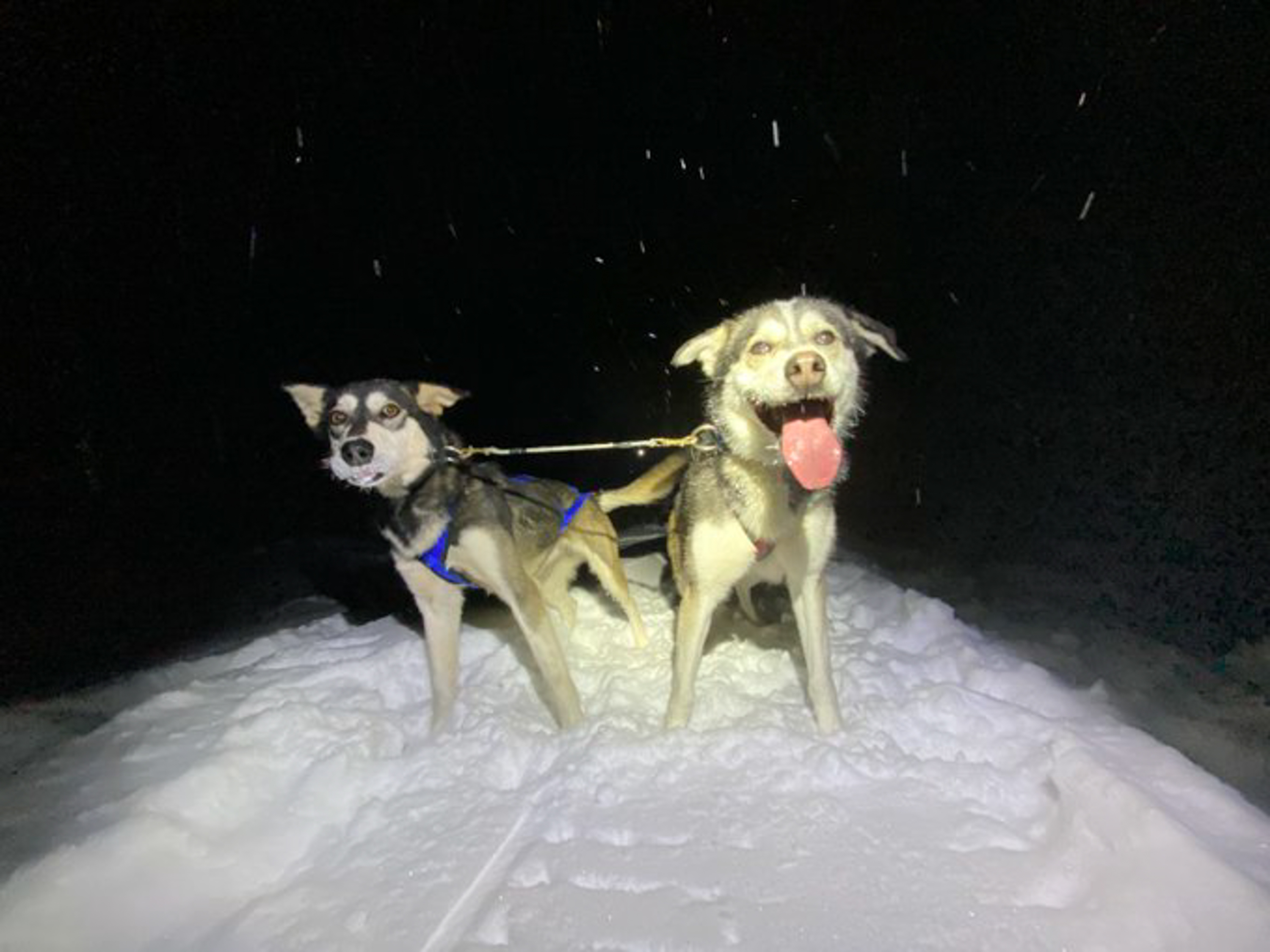 Dora and Pepé on the trail. Blair Braverman 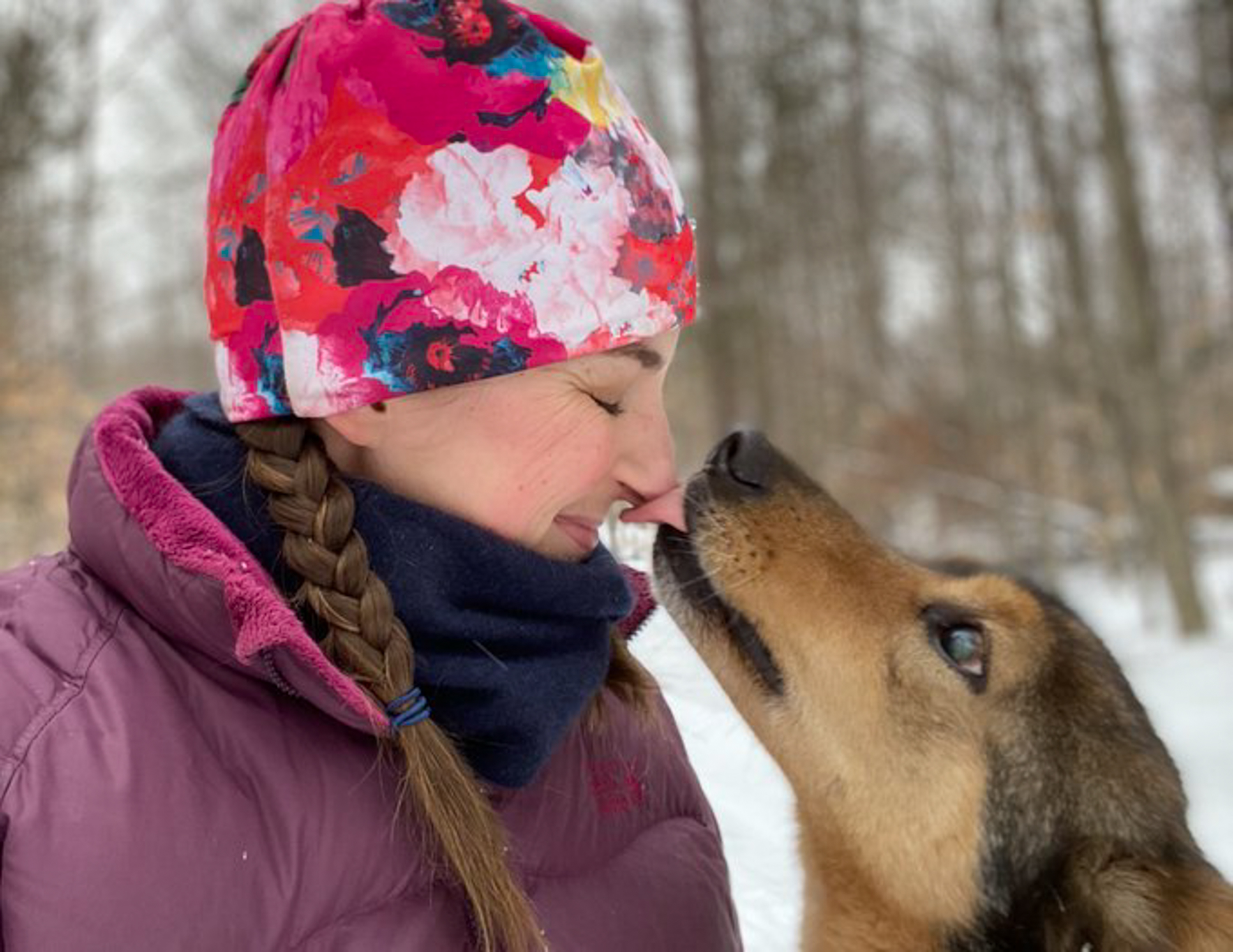 Blair with one of the dogs on the trail. Blair Braverman

SHK: Blair and Quince, you both raced a team in the Iditarod, and I wanted to ask you each to tell me a story from that experience — something that happened or something you felt during that time.

BB: The thing about (the) Iditarod is that it’s the most famous dog sled race, but it's not the only one. There are so many wonderful community events, but of course, the Iditarod is the biggest name and one of the oldest. So it was something I knew about before I even knew about sled dogs, really. I had read books about the Iditarod, and there are these legendary places along the trail, like there's something called the Dalzell Gorge, which is basically you come down from a mountain following this creek that has created a gorge down the side. And it's just terrifying. And you're just zigzagging across this incredibly steep series of waterfalls, practically over ice bridges. It’s ridiculous.

QM: What's that game where the ball bounces around between things?

BB: Pinball, it feels like that. It was so much worse than I had imagined. But Pepé, our leader with such confidence, just took on this trail and very deftly was taking all these turns and leading the other dogs exactly where they needed to go.

QM: It's quite a contrast to have the time when you become anxious also be sometimes when the dogs are most excited and have a pick-up of joy. But then afterward, once we get through that obstacle, I can appreciate it and be like, "Alright, you guys, that was totally fun."

BB: But then there are moments when the dogs might be nervous, but you're not at all.

If you have to go through a tunnel or an underpass or something, they will be like, "What is this? Why is there a tunnel?" And you'll be like, "OK, let me walk with you, and it'll be OK." And they're like, "All right, we trust you, but we do not like this tunnel."

So the moments when you lean on each other are different. They lean on you sometimes, and you lean on them at other times. 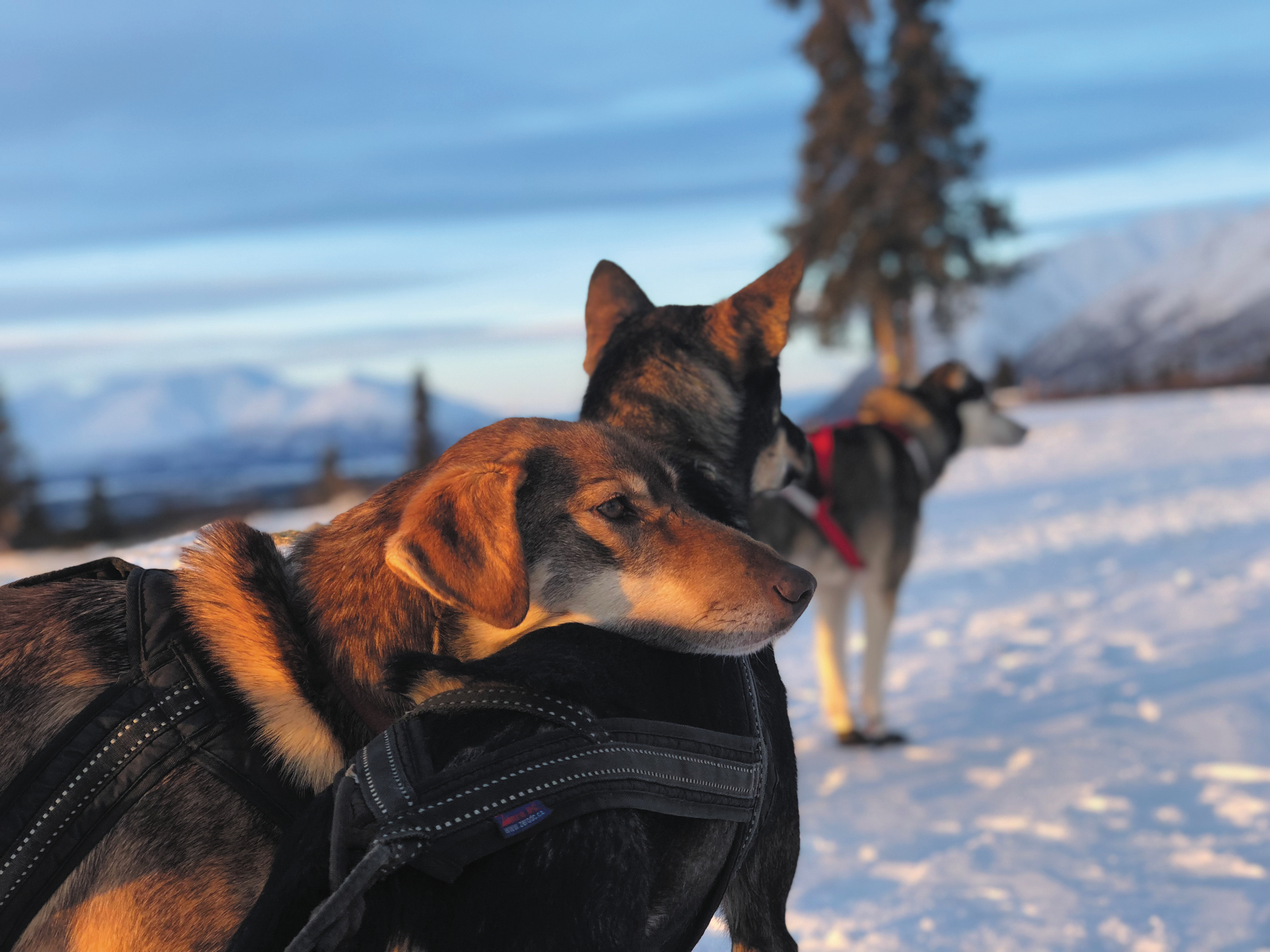 SHK: Is it body language? Is that what kind of language you are using?

BB: Well, usually the dogs are looking forward when they're running, so they can't see your body language, but they can feel your mood and your energy, and you're talking to them. And often you'll find people who have been mushers for a long time will stay very calm, even in stressful situations. They radiate calm because the dogs are going to copy your energy. Like there's a big moose or a wolf on the trail, and you learn to just be like, "OK, guys, all right."

QM: And sometimes there's an animal that humans might be worried about, like a wolf. Blair and I will each be on a sled and be like, "Did we just mush past a huge black wolf 10 yards away next to us for a while? Oh, I guess so."

QM: If it's a small animal like a mouse or something, they usually just consider it a trail snack and move on.

SHK: You have so much joy and so much happiness with these dogs. Has there been a hardest moment that you had to get through with them?

Something that is beautiful about having a dog team is that you can see the other dogs on the team mirroring the behavior and the movements and the instincts of dogs who have not been there in a while. When we first got into mushing, we had a dog named Trace who came to us. He was incredible — and then he developed lymphoma. I think we'd only had him for months, but we loved him so much, and he passed away shortly after that.

There was this one driveway that Trace loved every time we ran past it, and none of the other dogs cared. But Trace loved this driveway. He was fascinated by it, and he would always look over his shoulder and be staring at it when we went by. And after he passed, I'd notice other dogs would look at that driveway — some young dogs look there, and it's just this one inconspicuous spot. But it feels like they sort of learned like there was a dog who thought this was important, so they keep an eye on it.

SHK: That's a beautiful way of remembering the dog.

BB: It is, and it does feel like, I mean, this is getting a lot bigger, but it makes me think that that's how human lives work, too. And we just don't have long enough lifespans to see it. You know, we shape our community. And then as it continues to evolve, the impacts of the people who are there are still making ripples.

BB: There are artists who make art about the dogs, and there are incredible people who have created jokes that are hilarious. They make me laugh all the time.

QM: It feels like people are never alone. Because if one person is struggling with something personally, a surgery or divorce or something, there's 20 other people online on a given evening who will support them.

BB: The humans who follow the dogs really feel like a part of this team and are so kind and incredible.

When I was in the Iditarod, I started coming into villages and people would hug me and I didn't know what was going on. I thought, "I'm really sleep-deprived because I have no idea what's happening." And it was because fans of the team had organized to raise money for schools in all the villages we passed through and raised over $100,000 that year. And this has continued every single year since then for not just the Iditarod, but other races in that area.

And so just the kindness, I feel like cool people are letting me hang out with them because the dogs are cool.