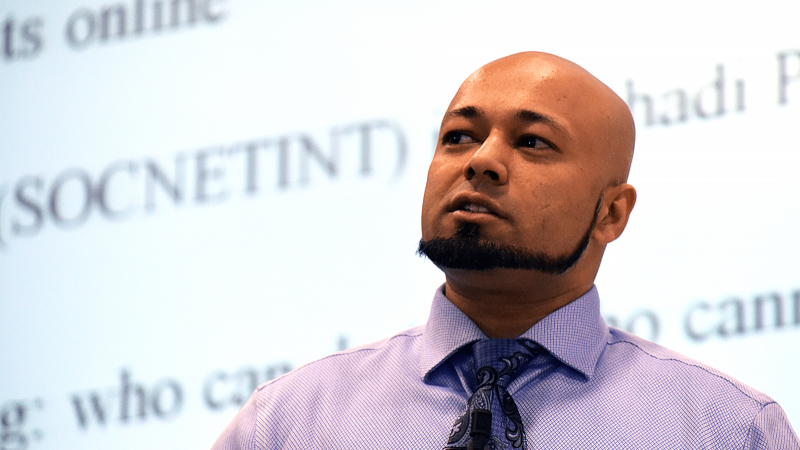 “You will find what you're looking for, so think deeply about what it is you seek.”

- Arno Michaelis, former white supremacist, from his memoir, “My Life After Hate”

- Åsne Seierstad, from her book “One of Us: The Story of Anders Breivik and the Massacre in Norway”

I was born in a time where there was one mosque in all of Toronto. I come from a religious family. We would go to the mosque at least once a day. I was 17 and my parents were in India, and I decided, “Hey, the family is gone. We are going to have a party.”

That evening people just started showing up. There were easily 100 people and I'm standing on the veranda with a friend of mine and he says, “Hey who's that?”

I look over and I can see the outline of an adult male with a bright white hat and a bright white robe. I realize, “Oh boy this is my uncle” and I'll be honest almost pissed my pants.

My uncle just walked up to me and slapped me in the face. Then suddenly he bellowed really loudly, “Get out, get out all of you.”

A feeling of absolute guilt and shame overcame me. I just wanted to not be in existence at that moment and realized, “OK the only way that I can fix this is for me to get religious, quote unquote.”

And getting religious, quote unquote in my context was a group called the Tablighi Jamaat. Now the Tablighi Jamaat is an apolitical religiously conservative group that proselytizes to other Muslims. So basically they convince Muslims to be more observant. One of the things that they organize is a program you do for four months — two months in India and two months in Pakistan. So, in May of 1995 I got on a plane and flew to India. The Tablighi Jamaat have a headquarters in Delhi. You live in the mosque, you eat there, you sleep there. Your daily activities would be to go around the local area. After spending two months in India I was then sent to Pakistan to a city called Kota Kota which was the stronghold of the Taliban and it still is. And so just like I did in India I would walk around the local area and basically invite people to the mosque. And as I was walking around I could see some guys they had turbans, beards, robes. I thought, “Oh, let me go and talk to them.”

As I came close to them I saw that they were armed. They had rocket-propelled grenades, AK 47, and other weapons and ammunition. And so I basically gave them the same talk that I would give everyone else - to bring about change in the world. They listened to me and then one guy said, “Look, if you really want to change the world you do it with this.”

You know they had this swashbuckling way about them. It was almost like the manifestation of the ancient heroes of the Muslim world. I became completely enamored by them. I was bit by the so-called jihadi bug. So I returned to Toronto, Canada in September 1995 and I was thinking about what they had said. It really appealed to me.

But this was less about politics per se and more so about the idea of this jihadist identity, to self identify as a jihadi or as a giant somebody who was a combatant. This is really what it came down to. So in 1998 Osama bin Laden came out with this fatwa. And of course the bombings that took place thereafter in Tanzania. That was my religion now, this very militant worldview with clearly defined enemies where we were God's elect. You know we're doing what other Muslims are too cowardly to do or too ignorant to do on a religious level. This is how I saw myself in terms of the anger that manifested in my life.

In 2001 the September 11 attacks happened that prompted me to reconsider my worldview and decide, “Look I don't know my religion properly. I don't know Arabic.” I hadn't studied in any formal way. So I decided I was going to move to Syria. And so in 2002 I moved to Syria.

At the Islamic university in Syria I met this scholar whose nickname was Sheik Al Bohart Ali Bahar, which means “like the ocean.” They called him this because his knowledge was like the ocean. The first day that we met I told him I named my oldest son Mujahid, which is one who does jihad. And so he called me on it, basically saying, “What are you a jihadi?”

He goes, “What does jihad mean?”

I said, “Oh it means fighting.”

He said, “That's not what jihad means.”

And so that was his approach.

I would study with him and he debunked my extremist interpretations, verse by verse by verse. One of the main problems with extremist Muslims is that they have a very romanticized view of history. They think under Sharia and caliphate we all lived happily ever after. And that was never the case. So that systematic debunking is really what sealed the deal and stopped radicalization process for me.

If you come from a broken background the likelihood of you becoming a bad person is greater than if you don't come from a broken background. So when somebody like that looks at a jihadi video with some guy getting his head cut off or shot in the back of the head or whatever, that's nothing. That's actually something good to you. You get satiated by looking at that level of violence.

I think my anger at the extremist time of my life came from a childhood sexual abuse from a family relative. I'm 40 years old now and there are entire blocks of my childhood which I just don't remember. But I remember knowing that that I was angry. After that I did confront him. When I was little I threatened to break his back when I was older and bigger and stronger. These are the kinds of things that can push people into extremism.

Mubin Shaikh is a former extremist who became a counterterrorism expert. If you want to read more about his journey check out his memoir “Undercover Jihadi.”