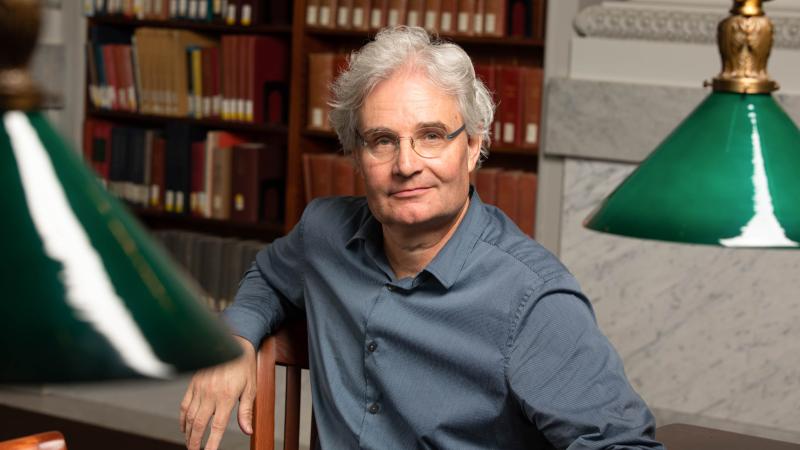 We’ve heard your office looks like it was decorated by the Collyer Brothers, the famous book hoarders.  Do you have a book fetish?

Steve Paulson: No!  I have a library.  It’s true, I can get obsessive about books  – and yes, my stacks of books are somewhat disorganized.   My co-workers like to twit me about fire hazards, but where do you think all those TTBOOK interviews come from?

How did you get into public broadcasting?

SP: After high school, I did a six-month internship with the National Zoo, studying the rare golden lion tamarin.  Once I got to college, I assumed I would major in biology.  Instead, I fell in love with Dostoevsky and Camus and majored in European literature.  I also edited my college newspaper, which was the only activity that seemed to have any possible connection to a future job.  I got a master’s degree in journalism, made my way into public radio and have been here ever since.

What makes a great interview?

SP: The best interviews go slightly off script, which means they get beyond the questions I've prepared, and they also take the interviewee into slightly uncharted territory.  The constant challenge, especially with well-known people who've done lots of interviews, is to take the interview somewhere new, where the conversation feels fresh and unrehearsed.   It helps when the guest is emotionally open, intellectually adventurous and passionate about what she or he does.  A sense of humor is a definite plus.  Some of my favorite interviews have been with people who carry a (small) chip on their shoulder, like Maurice Sendak or Sherman Alexie.  A touch of angst-driven obsessiveness can do wonders for an interview.

SP: Probably Barack Obama.  I interviewed him a few weeks before he launched his presidential campaign.  At that point, he'd already been getting a huge amount of public attention and people always talked about his charisma.  Actually, what struck me most during our interview was that he seemed pretty grounded and accessible.  For the most part, he avoided the "politician speak" that we usually hear from someone in his position.  Of course, he would probably do a very different interview now.

SP: Atoms and Eden is a collection of 20 interviews, most of which originally ran as cover stories in Salon.

Sorting out the relationship between science and religion is one of the great intellectual dramas of our time.  Unfortunately, most of the public discussion about science & religion is incredibly shallow.  It tends to get stuck on hot button controversies like evolution vs. creationism, and it rarely gets to the deeper questions that are fascinating:  Is it just a crazy, cosmic stroke of luck that we're here at all?  Or do human beings have some larger, mysterious purpose?  There are no simple answers here.  Ultimately, these are really questions about how we construct meaning in our lives.

Do you consider yourself a spiritual seeker?

SP: Yes, though not in any conventional sense.  I don't go to church or have any regular spiritual practice.  But the big existential questions have always gnawed at me - there's a reason I was obsessed with Dostoevsky in college! - and I'm still trying to sort them out.  I might add that I come from an unconventional family.  My parents spent some time at Findhorn, the famous spiritual community in Scotland, and they later founded an eco-spiritual community in Wisconsin.  They consider me the family skeptic, but we share many interests, and we often talk about trying to create "sacred space" in our lives.

If you could interview 5 people, living or dead, who would you choose and why?

SP: Well, if we limit the historical scope a bit, here are a few people I'd love to interview:  some of the founders of modern physics, including Einstein, Wolfgang Pauli and David Bohm, because they were fascinated by the philosophical implications of their science.  Muhammad Ali, circa 1980, as his boxing career was winding down and he was perhaps ready to reflect on his extraordinary life.  Some jazz legends, including Billie Holiday, John Coltrane, Bill Evans and Keith Jarrett.  I just love their music.