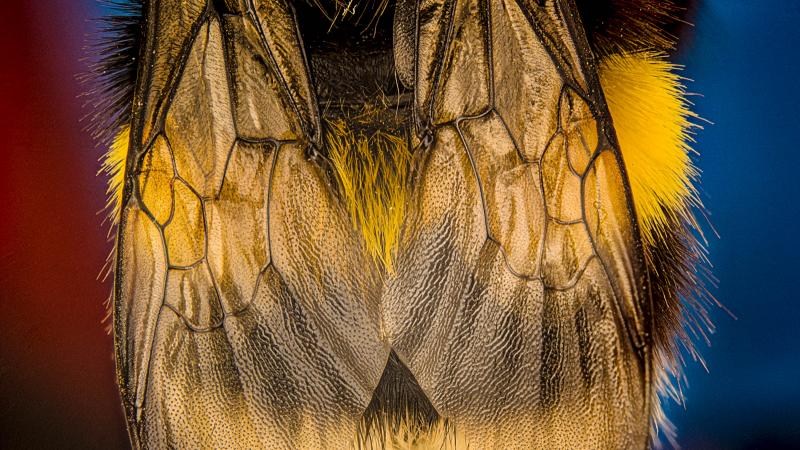 Every so often, a new discovery revolutionizes how we understand another species. That’s what happened when German scientist Karl von Frisch cracked the mystery of the honeybee’s waggle dance — the dance that shows the rest of the hive precisely where to find a new food source miles away. Von Frisch won a Nobel Prize for his amazing bit of detective work, but his own life was itself remarkable. He made his discovery during World War II after the Nazis nearly destroyed his career because of his Jewish ancestry.

Tania Munz: They are able to see ultraviolet light. They're able to see polarized light. So they have a different sensibility about the natural world around them, and that's really what Karl von Frisch was exploring, really trying to figure out how bees see their world.

Steve Paulson: The discovery that really put von Frisch on the map was figuring out how honeybees communicate with each other through this elaborate dance that has been called the "waggle dance." And people had seen this for centuries. They knew that bees do this dance, but they never knew why. And then he comes along and figures it out.

TM: Aristotle had written about how the bees shake, and he basically described the honeybee dances. And beekeepers also for centuries had speculated about bees recruiting one another to food sources.

There was also so much lore over the centuries about how bees might manage the complex politics of the hive.

Von Frisch noticed that when a dish was empty where a bee had previously been feeding, a bee might come back now and again to check on this food dish. When he filled it up, he realized that lots of bees appear very quickly.

SP: He figured out that these bees were telling the other bees, "Oh, come and check it out!"

TM: Exactly. And when he looked into the hive, he discovered that the bees seemed to perform these kinds of dances. The "waggle dance" is in the shape of a figure eight, and over the course of von Frisch's research, he surmised that bees — with the waggle dance — were able to indicate the distance and direction of food sources. They're actually indicating, via their dances, how far away they should be searching for foods.

SP: Let me see if I understand this. So an individual bee might go off looking for food sources—maybe miles from the hive — and once they find something delicious, they come back to the hive and tell the other bees, "Hey, this is what I found" and get them to follow.

TM: Yes, that's right. Think about a figure eight that's sort of smushed in the middle, where there's kind of a straight portion between the two half-circles. The straight run portion of that figure eight is transposed by the bee at the same angle as she flew out to that food source with respect to the sun. So the straight run portion tells the other bees what direction from the sun they should be flying in.

The frequency with which the bee dances her figure eight tells them how far away. So the farther away [the food source], the more sluggish the dance is; the closer [it is], the faster she dances.

SP: Wow. How did he figure this out?

TM: Von Frisch had a very simple technique by which he was able to keep track of individual bees: He painted little dots on the thoracic and abdominal sections of the bees’ bodies to indicate decimal space.

He used these mesh pincers to carefully hold the bee in place, and then with a very steady hand made a little colored dot onto the body of the bee to number it.

Actually tracking them while they were flying was really difficult and elusive: there are all these accounts of how they try to string up white sheets to see and observe their flight, and that part was really tricky. But what they could do was make a note in their lab notebooks that this bee fed in the hive, and then somebody else could say that same bee — lets say it's number 12 — arrived at this time out in the field.

SP: So this is really an amazing means of communication, which had not been discovered before in the animal world, in terms of such precise directions of where to go.

TM: This discovery that an animal as small as a honeybee would possess something like symbolic communication really captured the attention of lots of different people in lots of different disciplines. This was a big deal. And then by the 1960s, honeybees had emerged as the most common form of non-human communication that was studied.

SP: So von Frisch had made this amazing discovery. He built up quite a name for himself, especially in German science. But then there's another story, a parallel story to all of this. He ran into trouble when the Nazis came to power in 1933. What happened?

TM: One of the first things that the Nazis did after Hitler was Chancellor was to have all civil servants fill out papers to prove that their ancestry was properly Aryan according to their standards. Karl von Frisch filled out his papers in 1933 and indicated that his parents and grandparents were all Roman Catholic. But over the years and in the 1930s, denunciations against von Frisch start to accumulate. And of course this was a period when there were many denunciations and really nobody was safe.

In late 1940, the Nazi government actually finds evidence that his maternal grandmother —in fact — was Jewish, and that her parents converted to Catholicism shortly before she was born. Many people in the 19th century, as they became assimilated and part of the bourgeoisie, would convert to Catholicism or to Christianity. And so in early 1941, von Frisch gets a letter from the university that says "we will force you into retirement because according to the 1937 law, you are no longer eligible to teach and you've been found to be a quarter Jewish."

There was a kind of chilling accounting that was done by the Nazis when one grandparent was Jewish— his classification was "second degree cross-breed."

SP: He had various prominent German scientists to come to his defense. But that wasn't enough, right? It took the outbreak of a bee plague, threatening to wipe out Germany's bees. And the president of the South Bavarian Beekeepers Association came to his defense and appealed directly to the Nazi headquarters to save his job.

TM: It's called nosema apis, a microsporidian that infects bees and it flares up at certain times. At that time, it was devastating Central European bee populations. Now, much of how Germany interpreted its loss in World War I was due to food shortages, that part of why they lost was because of the British blockade, that there wasn't enough food. And here they were again locked into this grinding war of attrition, and they needed to feed the troops and the home front. Von Frisch's work on honeybees, on this bee plague, promised to help alleviate food shortages.

SP: Do we know what von Frisch actually thought about the Nazis, and specifically their efforts to purge Jews from the academy?

TM: You know, I spent so many years, about 10 years in his letters and archives, but he's somebody who was actually very reserved. I very rarely caught glimpses of his more emotional life.

There are some indications though — I know that he very much bridled at the fact that the Nazis told him who he could and couldn't hire. He kept in touch with his students after they left. He put in a good word for scientists in Poland after they were all arrested and interned in the Dachau concentration camp. So he was no friend of the regime, but he wasn't a full-out active resister either.

I think in some ways that's what makes his story so challenging. But it's also a part that makes it really worth paying attention to.