Where Are We On The Roller Coaster Of History? 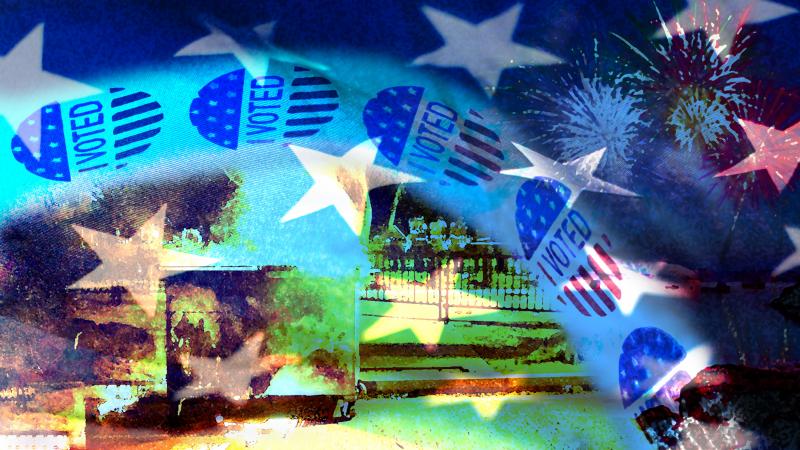 Historian Jeremi Suri is calm. Surprisingly calm, considering what he has to say about the current state of the American democracy. But if we look at our own history, he says discord and disagreement are just part of the deal.

"You know, I'm among those historians who see democracy as a rollercoaster. It goes up and down. It's not a straight line," says Suri, speaking to Charles Monroe-Kane for "To The Best Of Our Knowledge." "We like to think that every generation gets better at this thing called democracy. It's not true. Some generations, because of their circumstances, do better. And some don't."

Suri is a professor of history at the University of Texas at Austin and a former history professor at the University of Wisconsin-Madison. He's also the author and editor of nine books on contemporary politics and foreign policy, most recently "The Impossible Presidency: The Rise and Fall of America’s Highest Office." He placed our present moment into a larger context — and used the ups and downs of the past to theorize what might be on the track ahead of us.

But I feel like we're climbing back up again now. The Black Lives Matter movement was the largest social movement in American history. Almost all the activities were peaceful, and they involved more white people than Black people, in fact.

That's engagement. That's what democracy is about. And this is often the case, that in our low moments, it's the marginalized groups that lead us back up the hill of democracy.

Charles Monroe-Kane: Okay, I smell hope. I'm all excited. I'm leaning forward. But do we really have to go through all this pain to get there?

Even the Congressional Research Service has pointed out that there are very few years in our entire history when we have not been at war. We don't always call it war. But if you define war as the organized use of violence against a group defined as a threat? We have the highest incarceration rate of any peer society. That's the kind of violence, right?

We're a very violent society, and people in our society have never given up power peacefully. The process of historical change is always painful, and that is precisely what we're living through right now. And the two hundred and twenty thousand plus people who have died from COVID-19 are casualties of that war right now that we're fighting.

CMK: My wife and I filled out our absentee ballots weeks ago and I was going to mail them — actually had them in the mailbox in the front of our house. And my wife said, "No, no, no, no, no. What if they don't get counted?" So she took them to the local clerk. She wasn't confident that it would make it through the mail system and get counted. I think that's really scary, that she's actually worried that her votes are going to count in that way. What do we do with that, with that lack of confidence?

JS: Well, I think, first of all, this is not a new phenomenon. It's new to us who lived through the last 35-40 years, when we had pretty fair elections. But our elections have always been fraught with politics and efforts to count some ballots and not others.

Lyndon Johnson, when he was elected to the Senate in 1948, he was famously known as Landslide Lyndon because there was a county in Texas where these dead people seemed to vote for him in alphabetical order.

So this is not a new phenomenon, but it is a case where we have the opportunity to make progress. And the way to make progress is to do exactly what your wife did, not just take your ballot somewhere where you know, it will be received, but to actually track our voting. That is how it worked in the 19th century when the elections were small enough, you would actually vote and you would see it. A number was counted.

CMK: I have two questions for you that I've been thinking about a lot. And the first one is Donald Trump wins the election. It's the 20th of January. There's no transition of power. What does it look like for American democracy?

JS: Well, I don't think the election of Donald Trump would be the end of democracy, but it would sink us very deeply into a violent, conflictual moment because many of the things he does are an attack upon what people believe are democratic rights. The right to speak, their right to have honest news and information, their right to have some access to health insurance, their right for their state not to be mistreated because the president doesn't like the governor.

And I think we're on the edge of people then massively responding through disobedience and through possible violence. And it wouldn't be the end of democracy, but it would become a very violent moment in our democracy. We're on the edge of that now, in fact.

CMK: Wow, I can't believe we're having this conversation. You know, I think I know how you're gonna answer this, but I want to ask you. America is arguably the most powerful country in the history of the world, yet we have all these problems with our democracy. It makes me feel like our democracy is weak if it can't handle, blank. How come we can't handle this?

JS: Well, I don't think it is because of Trump. He's definitely the most anti-democratic president we have ever had. But we have come to this point because of all the people who have enabled him.

The Republicans in the Senate, who have not been willing to hold him accountable. One can have one's own opinion on impeachment and conviction — I'm not talking about that — I'm talking about requiring that the executive agencies that work for the president don't do his political bidding, but instead do their jobs. The Justice Department has been manipulated by the attorney general. The Department of Homeland Security ... it’s acting as the goons for the president. And we could go on and on with a long list of that, all of these other agencies.

They get every dollar from Congress. And the Republicans have been unwilling to hold them accountable. They are the ones to blame. You want to protect our democracy, get people in the Senate who actually care about democracy and are not stooges to a party.

CMK: Yes, so I had a friend who was like, "You know, what Trump's done for us is a favor. He's exposed all the holes in the dike we need to fix." Do you feel like maybe that's the silver lining?

JS: This horrible moment exposes the rot. And it mobilizes us to do something about that. That's why George Floyd mattered. That's why Bull Connor mattered in the 1960s. That's why the Selma march was so important, right?

When they beat John Lewis and those peaceful civil rights activists walking across Edmund Pettus Bridge, it showed the world how horrible this was. You couldn't pretend it wasn't there anymore.

When George Floyd was lynched in front of us all, you could no longer deny that there's a problem of police brutality.

And so we have to act now. We can't pretend it's not there. Trump has done that for us, and that is the engine of change. We can pretend things are fine until it's pushed in our face. This is what Martin Luther King understood, that you have to expose in order to motivate.