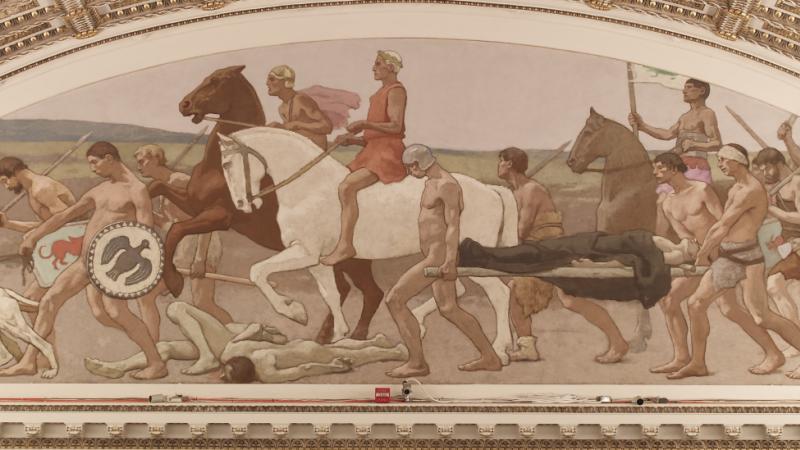 In 1991 two hikers in the Italian Alps stumbled on a mummified body buried in the ice. The Iceman, it turned out, died more than 5,000 years ago. At first, archeologists assumed he’d fallen in a snowstorm and frozen to death. Then they discovered various cuts and bruises on his body and an arrowhead embedded in his shoulder. They also found traces of blood on the stone knife he was carrying. Most likely, he died fighting.

Canadian historian Margaret MacMillan regards the Iceman story as emblematic of our violent nature. Humans are a quarrelsome lot with a special talent for waging war. In her book War: How Conflict Shaped Us, she argues that warfare is so deeply embedded in human history that we barely recognize its ripple effects. Some are obvious, like the rise and fall of nations, but others can be surprising. For all that we cherish peace, war has also galvanized social and political change, sometimes for the better. It’s also sparked scientific advances.

MacMillan is the author of several highly regarded histories of war and peace. She also has a personal interest in this subject. Her father and both her grandfathers served in wars, and her great grandfather was David Lloyd George, Britain’s prime minister during World War I. But she says her family history isn’t that unusual. “I’m in my 70s and most of us have had family members who were in the First World War or the Second World War or knew someone who was in either war,” she told me.

You can read Steve and MacMillan's conversation in Nautilus Magazine. Here's an excerpt:

Steve Paulson: If waging war is a natural tendency, perhaps in our DNA, what does that reveal about human nature?

Margaret MacMillan: I’m not sure war is in our DNA. Our propensity for violence may be in our DNA, but war comes with social organization. War is purposive and often calculating. People don’t just rush helter-skelter into war. They think about it, plan and train for it, and it often takes a great deal of effort. The military knows this. They do a great deal of training to turn people who may not want to kill others or risk their lives into those who will fight. So our propensity to wage war goes along with our developing social organization. If you’re nomadic, you can pick up and move into unoccupied space and get away from those who threaten you. But once you’ve settled down and become agriculturalists, it’s much harder to move because you have something to defend. Plus, you have much more that someone else might want to take. Unfortunately, the better organized we get, the better we get at fighting each other.

SP: But isn’t the main purpose of social organization to protect people?

MM: Even in protecting people, you may have to wage war. A really important factor in wars is greed for what others have. And along with that goes fear that someone is going to try to take what you have or in fact destroy your society altogether. It’s often very hard to establish trust among different societies. Our tendency is more to be suspicious of each other. We’ve seen parts of the world where neighbors have lived with each other in harmony, but there is always the danger that this will break down.

SP: Is this ultimately about tribalism? You’re either in the in-group or the out-group, so we have this inherent mistrust and fear of the “other.”

MM: It does seem to run through a lot of human society, though I think it’s something we can overcome. You can build institutions and values that make us more likely to trust each other. Religions are capable of bringing people into a larger grouping and insisting that we treat them as fellow human beings. And I think the European Union is in fact a very good example of how nations that formerly mistrusted and went to war with each other have learned to work together. But it’s a painful process, and we’ve seen how easily societies can be turned against each other.

The full conversation can be found in Nautilus Magazine.