Why Millennials Are Giving Up On Capitalism And Turning To Socialism 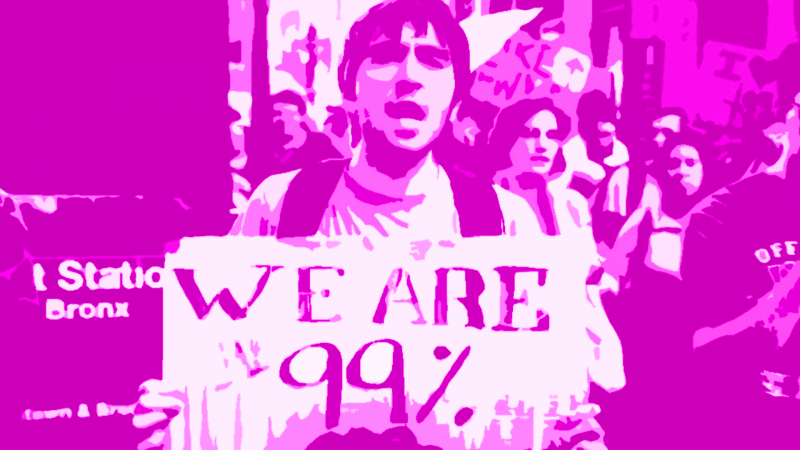 Bernie Sanders may be the public face of American socialism, but if you really want to understand its exploding popularity, you need to understand its pull among millennials. And not just newly-elected U.S. Rep. Alexandria Ocasio-Cortez.

Poll after recent poll shows one out of three young Americans identify as either Socialist or Democratic Socialist. Fewer than half, 45 percent, view capitalism positively — a 12-point decline in the past two years. America’s youth seems to be making a speedy left turn, and at a pace that surprises even longtime members of the vanguard.

"It’s gone from being a subculture to a movement that has real relevance," said Bhaskar Sunkara, the founder and editor of Jacobin magazine. "There’s a political ideology out there — not just Democratic Socialism — but a left-wing populist rhetoric that really does capture what people are feeling."

Sunkara has fanned the flames of this movement for close to a decade, starting in his college dorm room, when he launched Jacobin as an online publication with $300 in seed money. It moved to print the following year. Today, Jacobin offers "socialist perspectives on politics, economics, and culture" in a sleekly styled print magazine with a circulation of 40,000, a website with over 1 million monthly visits, and an expanding portfolio of podcasts, events, a book imprint, and an academic journal called Catalyst. It’s now the hub for the next generation of the radical intellectual left.

I asked Sunkara to explain this socialist moment in America.

Anne Strainchamps: When did you become a Socialist?

Bhaskar Sunkara: I became a Socialist at probably 14 or 15 because I realized how much of life was an accident of birth.

My parents immigrated to the U.S. just a few months before I was born. I’m the youngest of five and growing up, I could see that my older siblings had fewer life opportunities than I did.

I had access to good public schools, a public library, afterschool programs, and I could see that the welfare state really did make a difference, really did equalize opportunities.

AS: What is it about socialism that seems to be resonating so strongly with millennials right now?

BS: I think it's as simple as the status quo they don't like is called capitalism. Socialism is no longer mired in Cold War associations with Soviet bloc dictatorships.

Also, the right has done us a big favor: Glenn Beck and all these other commentators during the Obama years would call any small incremental reform to make people's lives better "creeping socialism." I think a lot of young people were just like, "OK, if that’s what it’s called…"

AS: Jacobin, the little socialist magazine you started in your dorm room, today has an online audience of a million every month. It's probably the most influential publication on the left today. What were your initial goals and how would you describe them today?

BS: To be honest, my goal was just to keep the flame alive.

I was 18 years old when I joined the Democratic Socialists of America (DSA). The median age of the other chapter members (in NYC) was around 60. They were veterans of the Civil Rights movement, they had been involved in trying to unionize plants in the 1970s, in the anti-apartheid solidarity struggle in the 1980s. They had these stories and this mode of analysis — Marxist analysis and Democratic Socialist philosophy.

Creating Jacobin was a way to spread this knowledge, develop it among a younger generation and adapt it to new conditions. I really did consider it a legacy project, a little spark that might one day — maybe in 20 or 30 years — help create the next big thing. I don’t think we actually believed it would come this soon.

AS: What’s your sense of the millennial Socialists? This is your audience, your readers. Who are they?

BS: This is a sweeping generalization, but I’d say most of our readers are around 24 to 30 years old. Many are the de-classed children of the professional class. Their parents were maybe accountants or lawyers, but they weren't able to get a job after school. They have student debt. They're working as bartenders or at Whole Foods or in part-time jobs. It’s a downward trajectory from what they expected and what they grew up in.

There’s another group of people who were the first in their family to go to college. So they have first-hand experience of growing up with a lot of want and not getting a lot of support.

But you know, the left is still not reaching the vast majority of the working class. If we want to go beyond just being a subculture, if we want to really make a dent in ordinary people’s lives, we need to have a presence in those working class communities too.

AS: Do younger Americans really think much about class anymore?

BS: Data shows that more young people today are identifying as working class than middle class. Previously, in the 1990s, you might have worked as a barista or something but you were still pretty confident that your degree would translate into upward mobility. But now people are starting to feel like these are less jobs and more their life. Even those among us lucky enough to have stable salaried jobs — we’re just one medical accident or bill away from being in debt.

So I do think that when socialism re-emerges as a mass force in the U.S., the core spirit will still be a class one, even if it uses language like the one percent versus the 99 percent.

AS: Some of the biggest issues for young people today fall under the umbrella term of identity politics: race and gender issues. But those have never been high on the agenda for Socialists, have they?

BS: I disagree. Especially if you include anti-colonial struggles under the umbrella of race, Socialists have historically acquitted themselves quite admirably. But the question is, what do we mean when we talk about anti-racist politics?

After the victories of the Civil Rights movement, in many ways we have legal equality. But we all know that in actuality, if you’re born black in America you will go to the worst schools, have the worst job opportunities and the worst health outcomes. Infant mortality alone is so much higher for black mothers, you have a greater chance of not even surviving your first year.

So if you really want to address inequality, then you have to talk about mass redistribution of wealth and power into these communities, which means you are talking about class. For instance, I think an anti-racist program would be a jobs guarantee.

AS: You started Jacobin Magazine in 2010. Looking back, how do you think American socialism has changed?

BS: It has gone from a very small, obscure debating society of a few thousand people to something that incorporates potentially hundreds of thousands of people. Today we’re dealing with real political questions, with real political stakes: whether or not to endorse a candidate; on what conditions do we run within the Democratic Party; how do we relate to existing trade unions, and so on.

But we have to remember that this is a country of 330 million people. We need to put that into perspective and be aware that this is our window when the American people are actually listening.

And if we don't take advantage of this opportunity, then the populist right – the present or future Donald Trumps – may be the ones to tap into this anger and resentment. That’s my deep fear. There’s a window here, but it won’t last indefinitely.