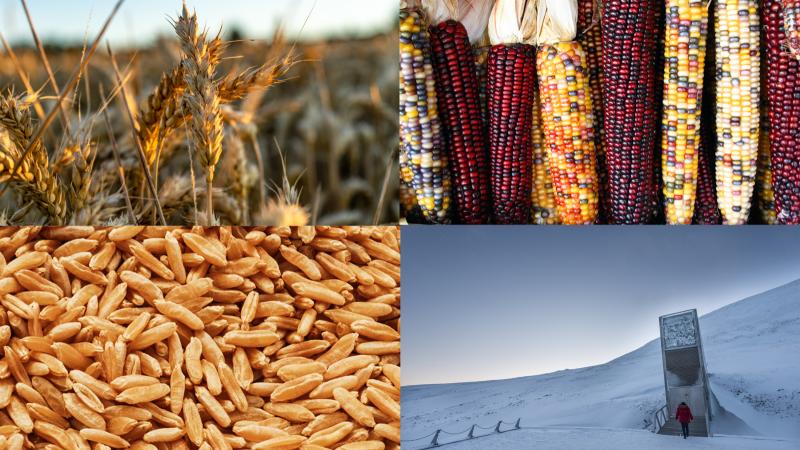 Most of us get our food from the grocery store, not the fields where it grows. But if you really want to understand where our food comes from — and the potential threats to the food supply — you have to think about seeds. The seeds that grow corn, wheat, rice and other crops. Because if catastrophe strikes, don’t you need a backup plan?

We may never have to confront this doomsday scenario. But we do need to heed the advice of "seed savers." Farmers and scientists have worried about the fragility of our food system for decades, and have gained vital insights into ensuring healthy crops for future generations.

Some of their advice applies to your next grocery trip. Some is more existential — have you really thought about the cultural memory that can be carried forward by the kind of crops we grow?

And in case all else fails, we have a plan for the doomsday scenario — it involves a desolate village in the Arctic Circle guarding a deep underground vault that doubles as a public art display.

Wheat has been around for millennia, maybe 10,000 years, but only in the past few decades has intolerance to the gluten in wheat-based foods become a problem. To Bob Quinn, a third-generation wheat farmer from Montana, the shift was completely perplexing.

So Quinn decided to take a closer look at his wheat.

What was it trying to tell him?

Quinn said it was simple — the wheat is "tired."

Modern farming practices are hard on the land, requiring more and more fertilizer and pesticides to squeeze enough wheat from every acre. Prices for their yields are low — a market necessity in order to keep food prices as low as modern American consumers have come to expect at their grocery stores.

When Quinn was a child, a mysterious man gave him a strange-looking grain at a local carnival. The man called it "King Tut’s Wheat." It turned out to be an ancient grain that many have argued is the oldest grain in the world.

Quinn's family began growing it locally as a novelty, but he eventually discovered that it lacked many of the qualities that make modern wheat "tired." This ancient grain is high in nutrition, easy to digest, with a sweet nutty-buttery taste and firm texture. It was even edible to those with gluten intolerance. This wheat is called "kamut."

In addition to growing kamut, Quinn changed his farming practices.

He grows organically — no pesticides, no herbicides or nitrogen-based fertilizers. It’s a change that has made his crops more expensive to grow. But it really means adding value back into the food system — healthier food, grown at less cost to the environment, creating more rural jobs in the process.

"It’s hard to point blame when people are so easily buying into the idea of cheap food ... but now it is time we start understanding that and start looking at change," Quinn said. "The ones making the most money are the ones most reluctant to want to change anything because they like it exactly the way it is."

Botanist Robin Wall Kimmerer: The Wisdom Of The 'Corn Mother'

Botanist Robin Wall Kimmerer believes corn is more than something you eat. It’s also sacred. Corn is life itself. But looking out at her neighbor’s monocropped field of corn makes her sad.

As a plant ecologist and director of the Center for Native Peoples and the Environment at SUNY-Syracuse, Kimmerer works with students and tribal elders to research and restore plants of cultural significance to native people. And nothing matters more than corn.

"Corn is one of our deepest and oldest relatives," she said. "We’re literally made of it; when scientists analyze the tissues of American bodies, they call us 'walking Fritos.'"

The sweet corn we love to eat today bears little resemblance to the plant that was domesticated over thousands of years by skilled, indigenous farmers. The heirloom Native corn (MR3) Kimmerer studies comes in hundreds of varieties, "from tiny red strawberry popcorns to great big purple and white flower corns; the dent corns, the flint corns, every color and pattern — it’s extraordinary."

Contrast that with the genetically modified corn her neighbor grows, whose genetic integrity — not to mention nutritional value — has been altered by agribusiness.

"There’s a word for forcible injection of unwanted genes," she said. Provocatively, she calls this "rape."

Her work is not only about preserving genetic diversity. Seeds encode cultural values as well as DNA, said Kimmerer, an enrolled member of the Citizen Potawatomi Nation.

"There’s a reason corn is revered in almost every culture of corn-growing people as the 'Corn Mother.' Her kernels are not just stuff — every one of those seeds is an offspring — a baby," Kimmerer said. "Corn is sacred because she gives us her children in return for us protecting and caring for those children by planting them again."

Kimmerer and the tribal elders she works with often refer to native seed restoration as "rematriation," which is about much more than heritage varieties.

"It’s reclaiming the sacred. It’s honoring the memories that are in the seeds, and the promise that we will take care of seeds and by doing so, invest in the future," Kimmerer said.

Late in his career, agriculturalist Cary Fowler was offered an intriguing job: conduct the first United Nations assessment of the world's crop diversity.

Unfortunately, Fowler found out very quickly that our seeds were vulnerable. In the event of an apocalyptic event, we didn’t really have a backup plan for how we might reboot our food supply. For the survivors of such a calamity, how might they rebuild civilization? How will they grow corn or wheat or rice?

To find answers to these questions, Fowler he petitioned the UN and created the Svalbard Global Seed Vault — otherwise known as the doomsday vault.

Fowler said these seeds sitting in a vault in the Arctic Circle in Norway should be seen as the foundation of humanity’s future.

Suppose a catastrophic event — natural or man-made — wiped out our ability to grow all existing species of corn. Without the plant diversity preserved in the vault, it would be difficult to find a species that might thrive where others succumbed to famine or disease.

"A species is extinct when it no longer has the ability to evolve," Fowler said. "And that definition applies to not just to the California condor, but to wheat and rice. Without this diversity there is no evolution, and there’s no wheat and rice. And there’s no food security for human beings."