Where Did We Go Wrong With Wheat? 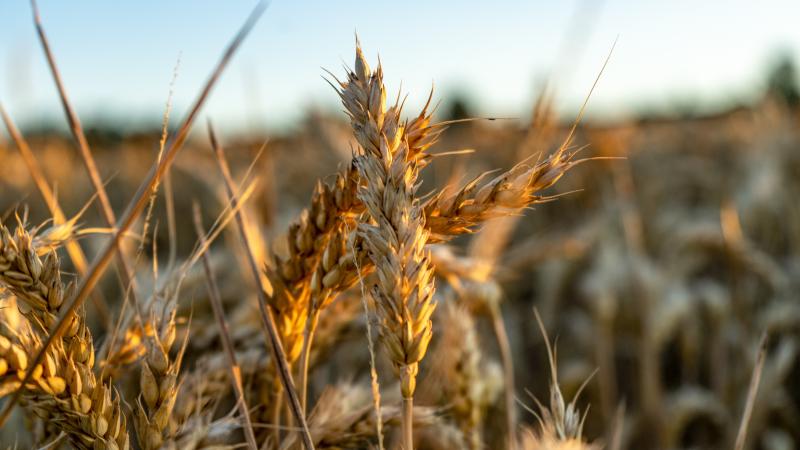 Khorasan wheat — commercially known as "Kamut" — is arguably the oldest grain in the world. Bob Quinn, who runs the multi-million dollar nonprofit Kamut International, argues that it's so much more than just an ancient grain — it's an example of what can be right in a very wrong American agricultural world.

Anne Strainchamps: Bob Quinn comes from three generations of Montana wheat farmers. So he always assumed he'd be growing wheat to someday. But when he was 16, a chance encounter with a stranger at a county fair set him on a different path.

Bob Quinn: Well I was at the county fair in Fort Bend — which is our county seat, just 30-40 miles from our ranch — idly walking around and munching on peanuts I suppose. This old fellow motioned me over and he said "Hey sonny! Would you like some of 'King Tut's Wheat'?" I said "well sure." And so he poured this giant grain right in my hand.

I didn't think really much about it until I was in college at UC Davis fourteen years later, finishing a graduate program. I was eating a package of Corn Nuts one day and it said it was made from a giant corn. And I thought "wow I wonder if Corn Nuts would be interested in a giant wheat?"

When I call them up in nearby Berkeley at that time, And they said "well, yes, we'd be very interested in that." So I called my dad and I said "Dad! See if you can find some of that old King Tut's wheat!" He found about a pint jar half full and sent me a couple tablespoons. I sent it to them and they did a little trial. "So this makes a fantastic snack," they said. "We'll take 10,000 pounds."

At a food show in Nuremberg in Germany, I met a fellow from Egypt. He was very interested in this grain, of course, and invited me to Egypt. And I was anxious to go anyway. So we went to the museum in Cairo and looked in the museum where they had the grain out of the tombs and lo and behold: it wasn't my grain at all.

So I was a little deflated by that. I went to Turkey a few years later and in Turkey, they said to me "Oh yeah, we know this grain. We call it "Camel's Tooth" or we call 'Prophet's Wheat.'" And I said "Oh I see why you might call it 'Camel's Tooth,' it's kind of shaped like a tooth. But why do you call it the 'Prophet's Wheat'? Does it have something to do with Mohammed?"

They said "Oh no no not that prophet," they said "You know, the one with the boat."

"Oh yes," they said "this is the grain Noah brought with him on the ark." .

And I said "wow, that's a lot better story my old tomb story." So that's the story we tell now.

AS:Right. The story he tells now. Well today, Bob Quinn grows that ancient grain — unmodified and organic — under the brand name "kamut," the ancient Egyptian word for wheat. And in the process, he has transformed more than that family farm. In his book "Grain By Grain," he argues that ancient grain farming can create rural jobs, curb the obesity epidemic, help slow down climate change, and don't even get him started on gluten intolerance.

BQ:Come on. Wheat is referred to as the staff of life, biblically. And it was the grain that built the Great Western civilizations of Rome, of the Ephesians, the Babylonians and the Egyptians. And and now all of a sudden in the last 50 years, 20 percent of the people can't eat it. I dare say [I doubt] that a thousand years ago, or a couple thousand years ago, at the height of some of these great civilizations, that that problem existed. And I think it's mostly due to how we changed the grain — how we raise it, how we process it, and how we bred it.

Steve Paulson: So what has changed in the last fifty years or so?

BQ: Well the focus on high yields. And so the plant has been made shorter, made resistant to plant disease, it has maybe more importantly had been made so that it can respond to high doses of a soluble nitrogen for chemical fertilizers to produce big yields. That's on the farm side. On the bakery side, we've increased loaf volumes by changing the gluten so it can hold more air. So you can make the famous American Wonder white bread, and that bread is lighter and has more area. So bakers are able to sell air for the price of bread, essentially. And they love it. They can make more bread with less wheat.

BQ: And it was a completely surprised, I think. No one intended this, that it couldn't be eaten by so many people. It was an unintended consequence that now is starting to be understood little by little, but more and more.

SP: You talked about the loss of nutritional value in a lot of these modern varietals. And you tell this great story in your book about when you were a PhD student in California, I think — you went to a peach orchard and you discovered what kind of peaches they were growing there. What did you find out?

BQ: Well that was actually the very first time that I really questioned the industrial, chemical, agriculture system that I had been taught was just the way it was in the future, and a way to feed the world. I don't believe any of that anymore. But what set off my mind — that different way of thinking — was this visit to a peach orchard where the peaches were being picked, and they looked absolutely deliciously ripe, with a wonderful blush of a ripe-looking peach. But they were as green as grass. They were hard as a rock. They were more for baseball than they were for eating. And they they didn't taste good. But they had been sprayed with a petro chemical that caused the peach to turn color and look like it ripe peach, even though it was still green. And therefore they're able to be picked and shipped in bulk clear across the country, without fear of bruising them or handling them one by one, the way you'd have to do with the nearly-ripe peach.

This was looked upon as a great advancement in agricultural production. And to me it was akin to fraud, actually, because you're pretending to sell something that looks really good that wasn't good at all. And that was the first time I really started questioning what we were doing, even though it was not a crop I was familiar with. We didn't grow peaches in Montana, but within 10 years I started questioning all of the modern, industrial, ag[ricultural], chemical system.

SP: So this story that you're telling involves so many major institutions, even kind of ways of thinking. We're talking about, I assume, the U.S. Department of Agriculture, huge corporations like Monsanto, capitalism — the whole capitalist system, the American desire for cheap food. It does raise the question: Who is to blame here?

BQ: Well that's a good question. I would... It's hard to point blame when people are so easily buying into the idea of cheap food, where they can save money and use it in other ways. I don't know if [anybody's] to blame for where we got to, but now it's time when we start understanding that, to start looking at change. And if we don't face up to change, then there's a lot of people to blame then. And most of them, of course...the ones that are making the most money are the ones most reluctant to want to change anything, because they like it exactly the way it is.

SP: Well it sounds like you're saying we need a new story here. And I mean I'm struck by...

BQ: Well, I think that the biggest way to make change with our food system is to reconnect the idea of health and food, or food and health. Hippocrates taught this by 2300 years ago, that food should be our medicine and medicine should be our food. And if we were to reconnect the idea that food is somehow related to health — which is absolutely true, it has everything to do with health — and start thinking in that way, then it would be easier to make some of the other changes that we've talked about and that you've mentioned, because then you're talking about a real reason to change. It's just not a feel good thing, or the right way to address pollution issues or economic issues or whatnot. But something as basic as the health of the people of the country? I think that that would be a driver that could make significant changes, that would overcome the resistance to changed by these giant corporations.

SP:Well I am so glad that you are out there, and not just in [as] voice of despair but of real hope and possibility.

AS: Bob Quinn is the author of grain by grain. Steve Paulson caught up with him.