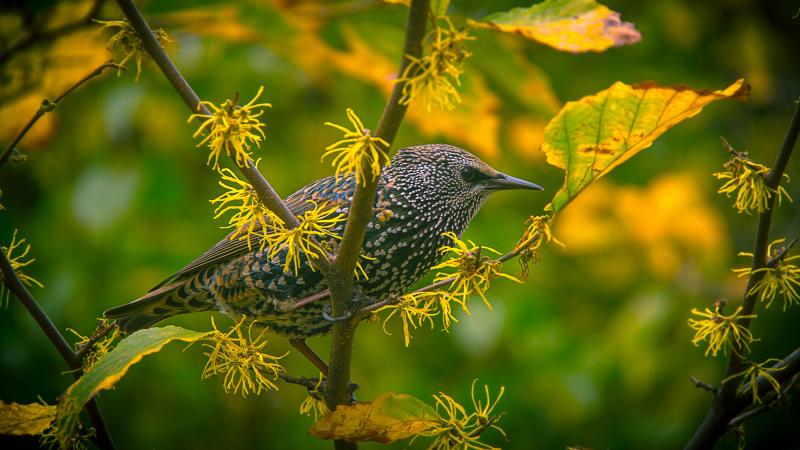 Elena Passarello’s book, "Animals Strike Curious Poses," is a journey through stories of the wild ones: the mammoths, spiders, birds and primates that have left their marks on our society.

"To the Best of Our Knowledge" host Anne Strainchamps talked with Passarello about the "animal gaze" and the legacy of Mozart’s pet starling, among other animal tales.

Elena Passarello: Of all the images that make our world, animal images are particularly buried inside us.

We feel the pull of them before we know to name them or how to even fully see them as if every animal a human brain has ever seen it is swallowed. We find their outlines as if on Ouiji boards in mountains and in clouds. Give us a stick and we'll draw them. Hit a rock on a cave wall until it yields one. Spread them out across the night sky and will point upward. See how they twinkle as they move.

Anne Strainchamps: I love that. Elena, I was reading your book the other night and I read that passage and I looked up and I started counting how many paintings of birds or throw cushions with pictures of cats on them I have. I just hadn't realized. You're right. We have pictures of animals around us all the time.

EP: Well, you're a woman after my own heart if your house is decorated with cats and birds.

Once you start focusing on the ways in which humans have culturally assigned animals to different things, they're just everywhere.

Here I am in badger nation, right? They're everywhere.

AS: And another thing I wound up wondering was why are so many children's books about animals? And it's not just children's books. It's baby outfits and stuffed animals. Why do you think we fill our children's lives with animals from the time they're tiny?

EP: There's a really interesting essay by John Berger. It was written 40 years ago called "Why look at animals." And he talks about how we didn't always necessarily have animals as our playthings as children.

We didn't necessarily always see our kids as our cubs, but there's something about the contemporary world where you've got a room of your own with a crib that we want to decorate with things that are precious.

And there's some kind of connection between the fuzzy or the delicate or the small or the child like in the animal kingdom and preciousness, which is why we have (things like) a teddy bear. I had a rabbit named Tammy that I took me everywhere that I went.

I'm no John Berger but I also think we probably never feel more like animals or mammals than when we're keeping something close and caring for it. That system of sort of having a cub of our own that small and watching it may be that's a reason that we sort of turn more to the animal kingdom.

AS: It's as though as we grow up we lose that kind of intuitive connection with animals.

EP: Yeah the gaze. He talks about the gaze that sort of goes away. We used to be able to sort of share a kind of communicative experience from what we understood when we looked at an animal and then what we didn't. And now because we're putting animals in these different places, or we were 40 years ago according to him, we don't have access to that anymore.

AS: Do you have a favorite animal in the collection?

He said, "You know, I bought a starling today," and then he wrote a little line of music.

So we think that he went in and saw the starling and the starling sang a kind of funkified version of a piece that he was working on and it delighted him so much he had to bring the bird home. And we know that the bird stayed with him for three of the most prolific years of Mozart's life. And then he threw this elaborate funeral for the starling when it died. It was a needed moment of lightness.

I like to think that some of these funkier turns and things that he was working on for those three years maybe came from this funny little bird that he kept with him. We'll never know for sure but we know he loved the starling, and we know that he imagined when the starling died, the starling looking down on him and approving of the fact that Mozart was continuing to make beauty and compose in this sort of cheeky way.

So that makes me think that they we're maybe collaborators.

Editor's note: This interview originally aired April 7, 2018. The interview has been adapted for online.