How To Catch A Neutrino 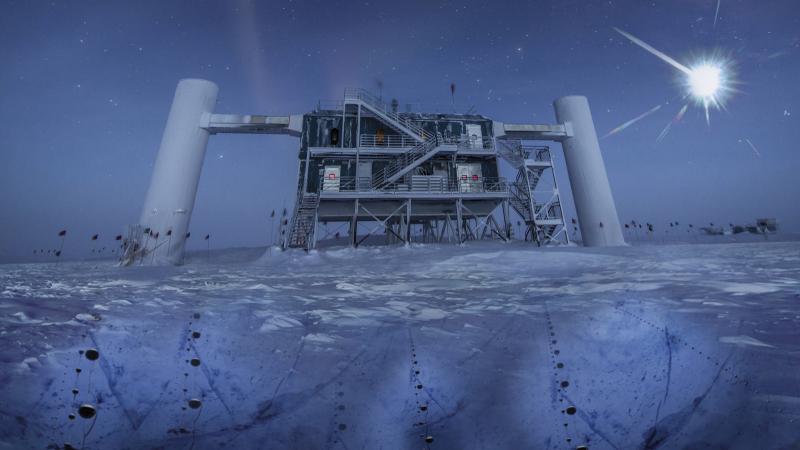 Scientists have just cracked one of cosmology’s biggest mysteries. They’ve traced a cosmic neutrino — so tiny that it’s called a “ghost particle” — to its source in a distant galaxy. Neutrinos travel in cosmic rays, which bombard the Earth every day. Scientists first detected cosmic rays in 1912, but they didn’t know where they came from until this discovery. It turns out this neutrino was formed in a swirling black hole in a galaxy four billion light-years from Earth.

The neutrino was detected by the IceCube Neutrino Observatory at the South Pole. This observatory is the brainchild of Francis Halzen, a physicist at the University of Wisconsin-Madison who’s known as the “Godfather of IceCube.” He first dreamed of building the South Pole observatory thirty years ago. He talked with Anne Strainchamps about this discovery.

Why is this a major discovery?

Francis Halzen: “We’ve actually collected neutrinos for five years, but we couldn’t figure out where they came from. So this was the moment when we figured out what their origin was. We have been trying this since 2013, but have been spectacularly unsuccessful, trying to correlate these neutrinos with maps of the universe. We had no clue where they came from.

[After the neutrino was detected] we reconstructed the direction. And within 43 seconds, we sent this telegram: ‘Look. We detect this really high-energy neutrino, from the direction of Orion,’ gave the coordinates, and that was it.”

What is the IceCube Neutrino Detector?

FH: “It’s a kilometer cube, a mile deep, under the South Pole. [To drill that deep] you melt your way into it. And that was of course the challenging part - to actually build this detector a mile deep. That was finally done by a hot water drill. The hot water drill was actually a concept that was developed at the University of Wisconsin. You cannot buy this from the oil companies in Texas.

The ice itself is the detector. Then we filled it with 5,160 light sensors that detect this blue light. So when a neutrino interacts, each light sensor measures in detail how many particles of light it sees and when, digitizes that information in the ice, and sends it to a computer that’s sitting on top of the array.”

Why Do Neutrinos Come From Black Holes?

FH: “We always knew you need a black hole to accelerate these particles. You need an enormous reservoir of energy to accelerate these particles and that’s why we can only think of black holes to do this. Black holes eat up stars and everything that comes close to them. But they occasionally choke. They actually don’t eat up all the stuff around them. So when they get saturated, they throw it out along beams. And in this particular case, the beam was actually pointing right at the Earth.”

Was this discovery a “eureka” moment for you?

FH: “No, that’s actually the interesting thing. In this particular discovery, there was no moment. I think it’s only in Hollywood movies there are eureka moments. I can tell you, in 2013 when we first discovered cosmic neutrinos, I basically lay awake at night for a year thinking, what could be wrong? We were ‘the breakthrough of the year’ in 2013, but I was thinking all the time, how do we run this back if we find we were fooled by nature, or we were fooled by our equipment, or worse, by our data analysis? And so when you make a discovery, you suffer. You don’t get excited.”