The Climate Change Stories We Need To Hear 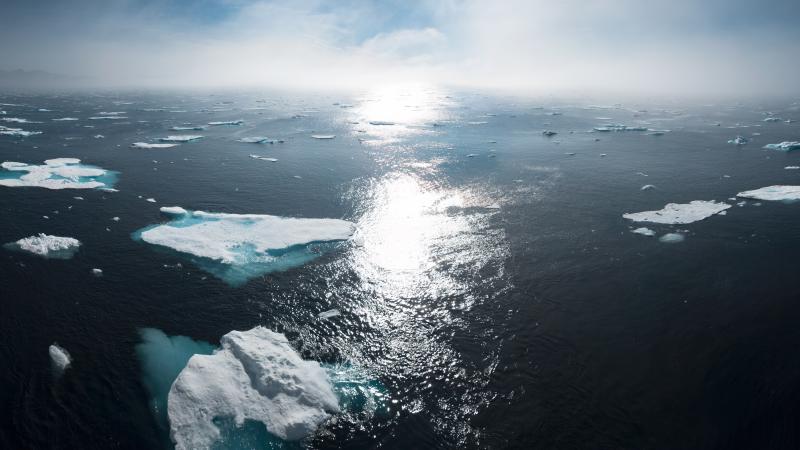 The most recent report from the climate scientists of the Intergovernmental Panel on Climate Change is grim — we need to take extreme action now to stave off the worst possible outcomes for our planet. Alice Bell — a climate advocate and "part-time historian of the apocalypse" — agrees, but argues that the collaboration required to just recognize the problem should offer some hope.

"It's a wonder of the modern world," says Bell of the IPCC, speaking with Anne Strainchamps for "To The Best of Our Knowledge." "So many people working together, pooling so much knowledge that stretches back centuries — I guess that's an example of the things that we can do when we work together."

In "Our Biggest Experiment," Bell traces the history of these scientists, whose work documenting the impact human beings have had on our planet goes back as far as the middle of the 19th century. Strainchamps talked with Bell about science denialism, the early figures whose work helped us understand the scope of the climate crisis, and why there are climate stories we don't hear, but need to.

Anne Strainchamps: One of the big surprising things for me is how far back the history of climate change goes. I mean, you tell this great story about one of the first people to raise an alarm about climate change — an American scientist and women's rights activist, Eunice Newton Foote. And this was 1856.

Alice Bell: I really wanted people to appreciate how deep these roots go. Eunice Foote was interested in how heat could be trapped by gases. She did a little experiment where she collected one cylinder full of carbon dioxide and left the other with just normal air and put them on the windowsill to see how the heat from the sun would flow through the cylinders, and whether there's any difference between them. She noticed that the cylinder full of carbon dioxide got very, very hot and then took quite a long time to cool down. So she said almost in passing in her paper, "if we had an atmosphere that was very full of carbon dioxide — if — it would lead to a very warm climate."

People seem to have forgotten about it — until just the last decade or so, when her paper was dug up and people realized there was this amazing story of this American female scientist in the 1850s who seems to have said something which now seems so visionary.

AB: Yeah, it is. The story of the climate crisis is a gradual discovery, like most science. I mean, the other side of it is that in some ways we're quite lucky that we had the knowledge as early as we did. Climate change is not obvious. Even when there are these fires and floods, we don't necessarily know that (it's) climate change. We need science to be able to recognize it as the climate crisis.

We could also easily have not done that research. (For) many scientists who studied the climate crisis up until the 1950s, it was just a weird side project for them — a little hobby, when they should have been doing something else (other) than looking over temperature data or messing around with vials of carbon dioxide.

AS: On the other hand, there are some moments — like this 1974 CIA climate report you write about — where there's just this searing realization that they knew and still no one did anything about it. Why did the CIA even care?

AB: They could see that it was going to have a big political impact. They could look back at earlier points in history where there were even small amounts of climate change from things like volcanic eruptions or periods of bad weather, which can sometimes happen, and how that could lead to famine and other political problems. And they were just really, really concerned about the geopolitical consequences of it.

They were also worried that countries would want to fight back against climate change, but they wouldn't necessarily fight back by stopping burning fossil fuels. They'll fight back with weapons to control the weather. We've kind of seen this recently, like in Dubai (where they used) drones to electrocute the clouds to make it rain.

(CIA analysts) were worried that one country would use weapons like this, and that would affect the weather in the country next door. They'd seen all the fights play out in terms of nuclear weapons, and they were concerned about what weather weapons might do.

AS: It is striking how much of the history of climate change is a history of these battles over narrative. When and how did the fossil fuel industry start really pushing climate skepticism and how effective were they?

AB: That happens in the late 1980s onwards and in the 1990s. And I think you can see a shift (that is) very well discussed in books like "Merchants of Doubt" by Naomi Oreskes and Erik Conway. The fossil fuel industry worked up a playbook (that) had already applied in tobacco — to delay action on the link between tobacco and cancer by having lots of questions. (Questions that) were both legitimate and disingenuous, like "Oh what about asbestos?" or "What about this?" That doesn't mean we need to stop talking about tobacco and cancer.

They've been very effective at derailing the conversation with a lot of questions and what became, I think, what we now understand as climate skepticism.

AS: I was thinking about this because I think that one predominant narrative we have right now about climate change is guilt. We could have made more radical lifestyle changes collectively, but also individually. We could have given up more, you know, not taken all those plane trips.

But I also wonder if that isn't blaming the victims, because there is so much power and wealth invested in the fossil fuel driven global economy. So I wonder if we need to tell more stories about the vested interests behind climate change.

AB: Oh, yeah. I mean, and this is very much a well-established tactic. The oil companies' PR agencies think — how can we delay action? And we know that BP boosted ideas of things like carbon footprinting and the idea that you as an individual might need to worry about your carbon footprint. They did that because it makes them look green, but arguably it has a really useful impact for them in that it makes people think, "Oh, it's my fault." And then what happens? People feel guilty and then they stop.

That's one of the genius bits about pushing the carbon footprinting idea — it's paralyzing. You get lost in that, and then you forget about it.

AS: So thinking about the climate change narrative today, the stories we do or don't tell, the way we shape them, what do you think we need more of? What stories are we missing?

My day job is co-running a charity that works for climate action. Just today, one of my colleagues, we've been spending the morning puzzling over how we can do stuff on decarbonizing the heating system in the UK because (it's) based on natural gas. It's so difficult. (But) then we found the story of a project happening in France and it just helped lift our spirits and help us think, "We could do something like that. How could we learn from that?"

We need stories of things going right so that we can learn from each other and have climate action of the kind of speed that we need.

I think another type of narrative we really, really need is stories from people who are living at the harsh end of climate impacts.

We've seen a lot of stories in the last few weeks about the heat dome. I have family in Canada, so I was paying attention to that and hearing what they were saying. But meanwhile, there were huge climate impacts happening in all other parts of the world that weren't necessarily being told so strongly, particularly (in) African countries. There's so many different African countries that feel climate change so tightly, and people who live in the U.S. and Europe don't often (hear about them).

AS: I guess personally, I kind of feel like we're drowning in negative bias today. It's a very scary moment right now when it's clearer every day that this is not just weird weather, it's permanent change. I do wonder ... is it responsible to tell any kind of positive or hopeful story or, you know, is it too late?

AB: I think we have to be careful with hopeful stories in that it's very easy to come over as crass. I think that we don't want to make people think that it's OK. I think there's a way in which it's another form of denialism. "Oh it'll be all right."

But at the same time, one of the things about climate change is it's not a win or lose issue. Kate Marvel, a climate scientist from NASA, always says "Climate change isn't a cliff you fall off, it's more of a slope you slide down." Now, I'd add that that slope is getting very, very steep. We're sliding down it very, very fast.

The IPCC report is coming out tomorrow. As a climate scientist, I’d like you to know: I don’t have hope.

I have something better: certainty.

We know exactly what’s causing climate change. We can absolutely 1) avoid the worst and 2) build a better world in the process.

We don't have to just dwell on all of the negative things, although we shouldn't just go, "Oh, look, shiny solar panel, it'll be all right!" Because that might be comforting, (but) it's crass as well. There are people out there dying.